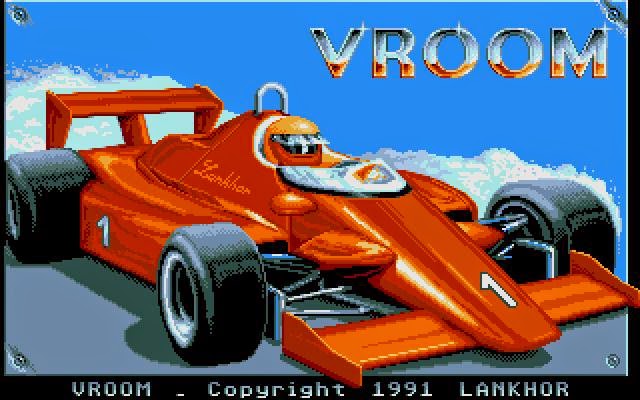 This invites you to try your hand on a succession of six circuits from around the world. You start each race from the middle of the pack and once you're underway you have up to five laps to overtake a set number of cars. Doing so lets you move on to the next race but failure equals game over. You get the choice of joystick or mouse controls here, as well as manual or auto gears, and it's pretty great fun, presenting a well-graded and challenging helping of exciting racing action. I spent quite a while oafing around here actually, but it was only a matter of time before that 'Racing' mode succeeded in enticing me to investigate further, and it was here that I experienced my first feeling of disappointment (well, regarding this game, not my whole life).

The Racing mode is very similar to the Arcade mode except it's time-based as opposed to score-based and it also lets you choose which circuit you want to race on, but for some inexplicable reason the joystick control option is gone, leaving only mouse control, and it's not easy! I suppose it's meant to be more 'simulatory' and more for experienced racers only, but to be honest it was so annoying and unintuitive I didn't stick with it for long, quickly returning to the safety and comfort of the Arcade mode. For me then, and any other players put off by the restrictive control options, this is effectively a game with just one proper play mode, so it's fortunate that it's a pretty spiffing one. It's true there aren't many courses but driving around those that are here is as involving and enjoyable as probably any other such game I played from this period.

There are several reasons for this. First the aesthetics, which are fab. The audio is minimal, consisting of a reasonable engine sound but only a couple of other effects, but the graphics are really good. They are a mixture of sprites (cars, roadside objects) and vectors (bridges, grandstands, etc) and, while they may not look like much from the shots here, everything moves very smoothly, the draw distance and scaling are fantastic (check out the Austria shot, above), and the sense of speed is superb. Even the little dials on your car 'dashboard' work, although your view of it is slightly weird (it almost looks like handlebars of a motorbike), and there are some other nice touches like bumpy rumble strips and roadside objects whooshing by when you're close to the sides.

Another great (and unusual) thing is that it's even quite a fair game. It's possible to damage your engine by revving too much and tyres can also be shagged up but both are fixed by nipping into the pits, but doing this isn't really necessary if you drive carefully. That said, it is possible to get away with making a stop and still finishing a race. You can even get away with crashing a few times! You do have to actually learn the courses if you want to make real headway though - hitting other cars won't have a great impact on your velocity (and if you hit them wheel-to-wheel you'll be launched into the air which rarely ends well!), while hitting any of the rather abundant roadside objects will cause your car to explode, all of which will see much of your progress undone (i.e. the cars you've overtaken will return the favour).

The other drivers have surprisingly decent/annoying AI too - some of them will deliberately slow down or speed up to cause you the most trouble possible, and parts of the circuit are narrower than others so this often means pootling along behind someone until you've got space to overtake. It might sound a little frustrating but it's actually great as it gives the feeling of being in competition with the other racers rather than them just being there to get in the way (which they do as well!), especially since the controls are also superb, at least in the Arcade mode. There might not be a great deal to Vroom but what is here is all so fast and smooth and downright playable that you'll likely keep coming back for a good while anyway. I know I have been! If only Lankhor hadn't been so stupid with the control restrictions...

Gameplay Video: Instead of making my own (probably embarrassing) video of this game, I thought I'd use that of Mr. Stickhead, a fellow blogger and custodian of the splendid 'The Joy of Sticks'. Check it check it check it out :)