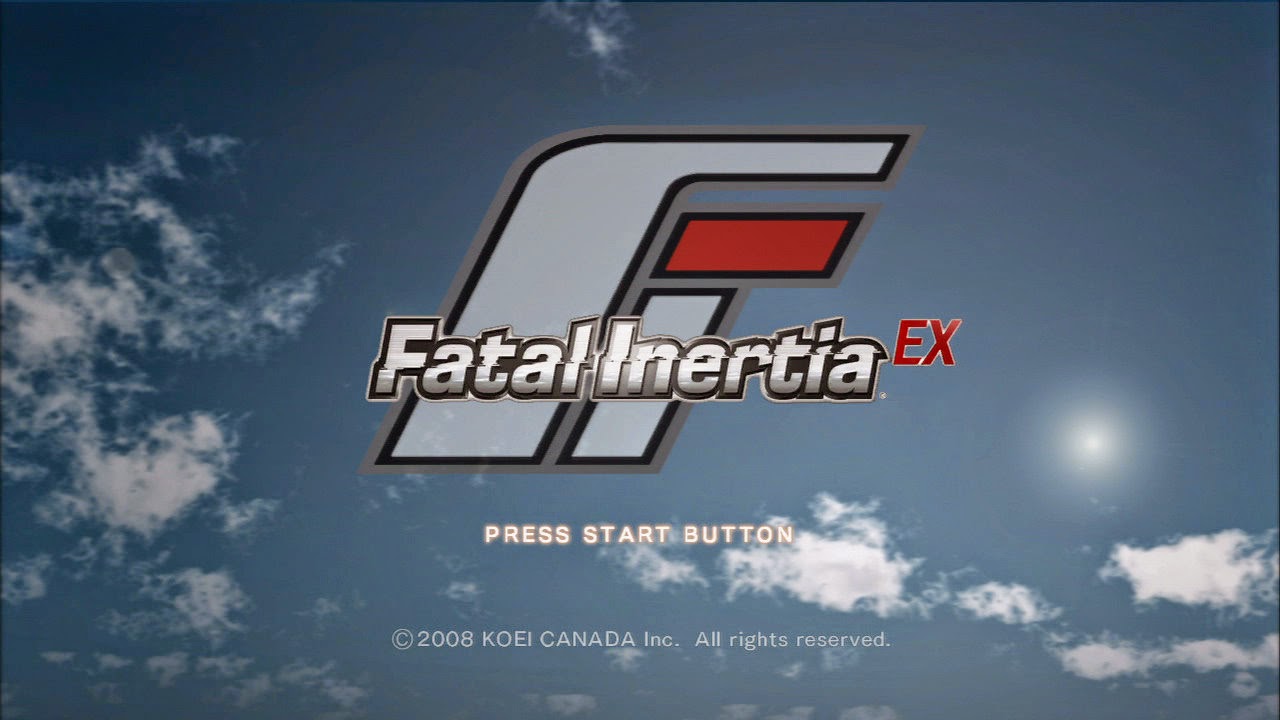 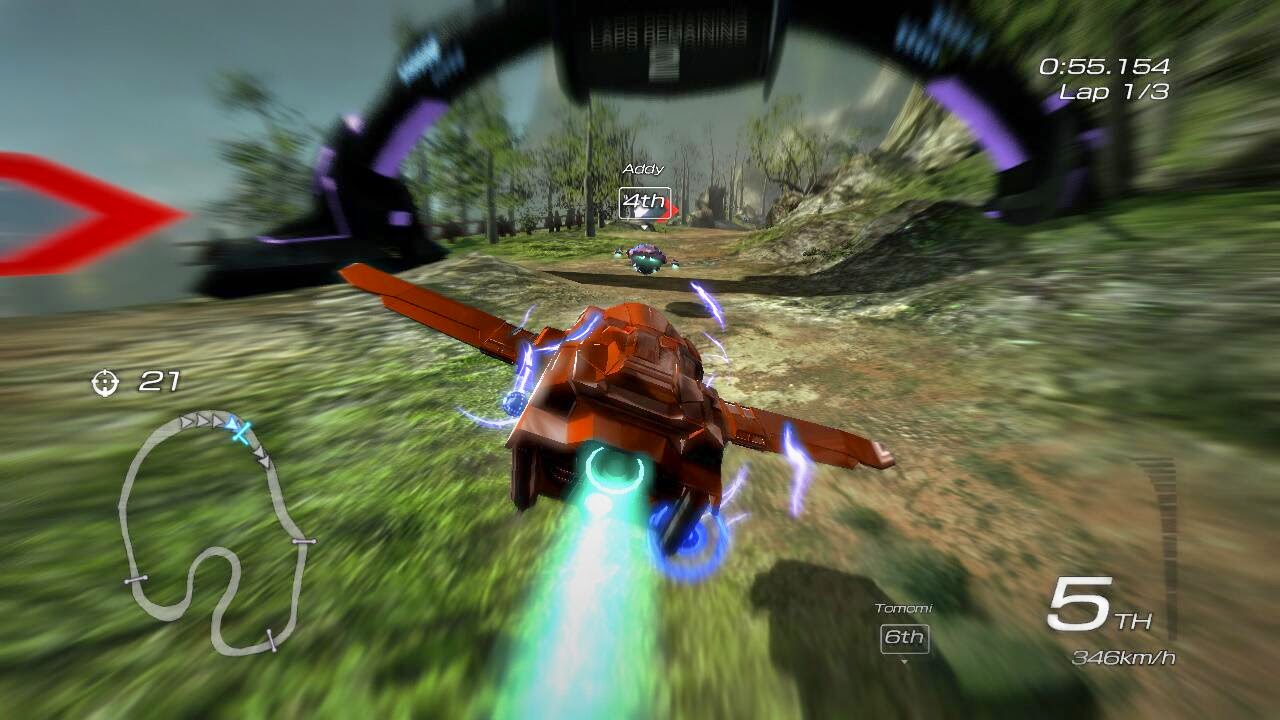 The first one of these offers either a Quick Race option, which allows you to choose a league (difficulty), type of event, race location, time of day, and circuit, or there's also a more comprehensive Career mode. The latter consists of the Proving Grounds (a tutorial which teaches you the controls and functions of your craft), and then four competitions. First there's the Invitational, a short four race introduction event. Finish in the top three and you'll get the chance to move on to the three proper leagues - Exhibition, Professional, and Elite. If that's not enough for you, completing all leagues will see a secret one unlocked - the Master League. Each league is split into several series' and each of these into several races which can be any of four types. 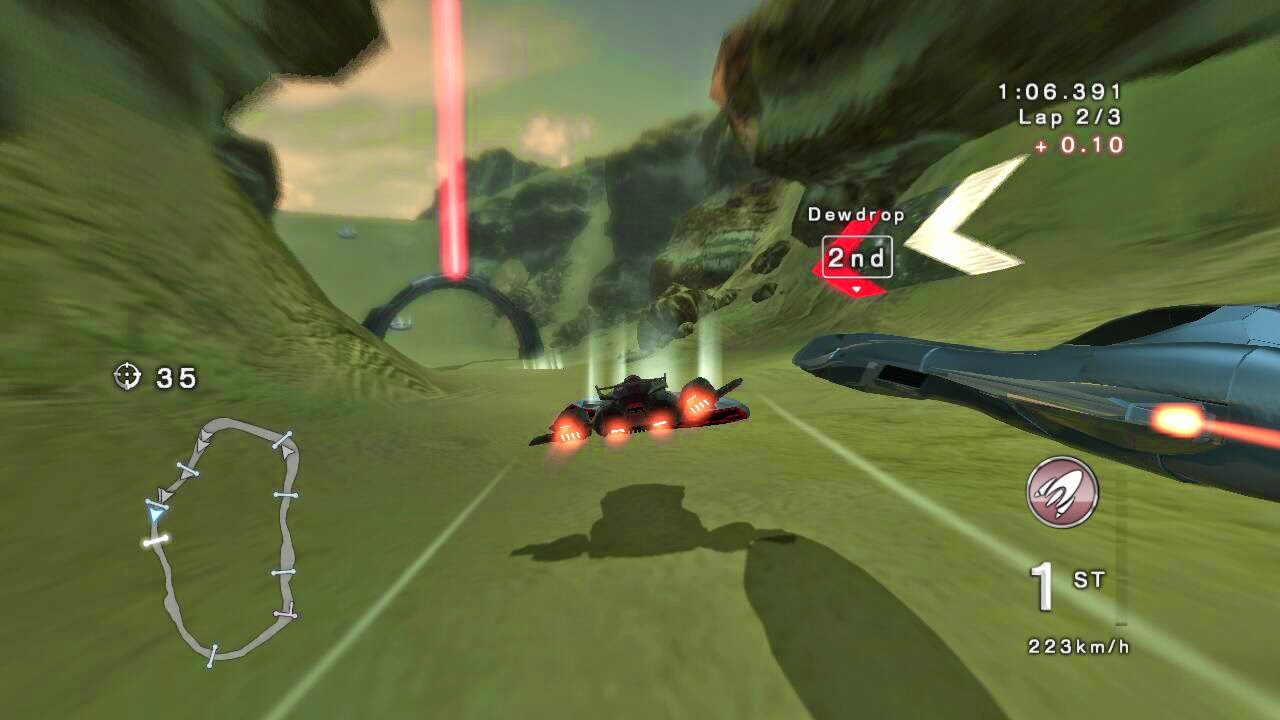 More on those later though. First, it's probably worth mentioning one of Fatal Intertia's more Wipeout-ish features - the weapons. Each course has lots of weapon pads dotted throughout and skimming over one will randomly give you one of the nine weapons available. These include rockets, force blasts, smoke screens, EMP pulses, shields, magnets (which slow you down until you can shake them loose), time dilators (which slow time for everyone but you), and even a cable (which you can launch at an opponent and anchor them to yourself or the ground). Most of these weapons have more than one use too. Magnets, for example, can be dropped behind you or fired forward at an opponent, while rockets can be used as a projectile weapon or as a booster. 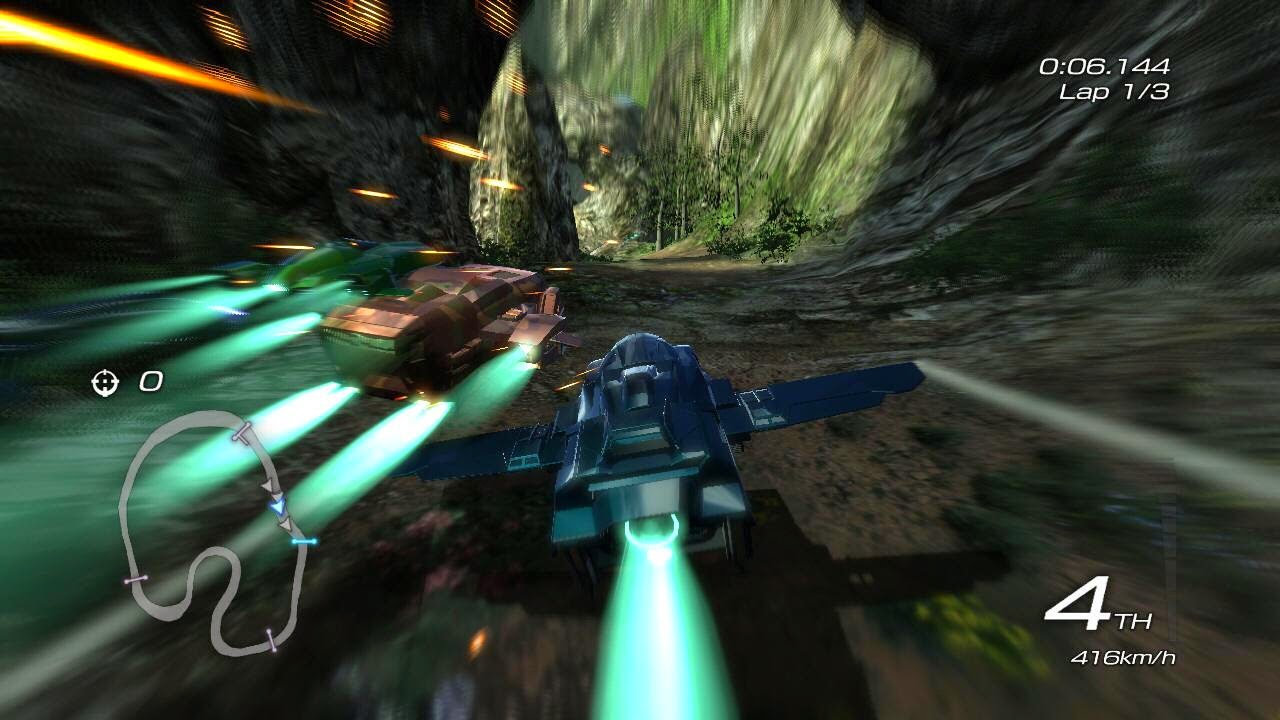 To begin with there is only a single class of craft available called the Phoenix but performing well will attract the 'sponsorship' of other manufacturers which will open up fancier classes such as Aurora, Mercury, and Titan. Each class is different in terms of weight, speed, acceleration, handling, strength, and braking, as well as their sleek appearance. Certain classes are obviously better for certain races or competitions, but it's all fairly inconsequential once you've been playing a while as you can also tune/upgrade any craft in the garage. Most of the upgrades have to be unlocked first but there is quite a selection available including engines, brakes, and various external body parts that can alter any attribute of the craft in question, so you can configure it however you want. 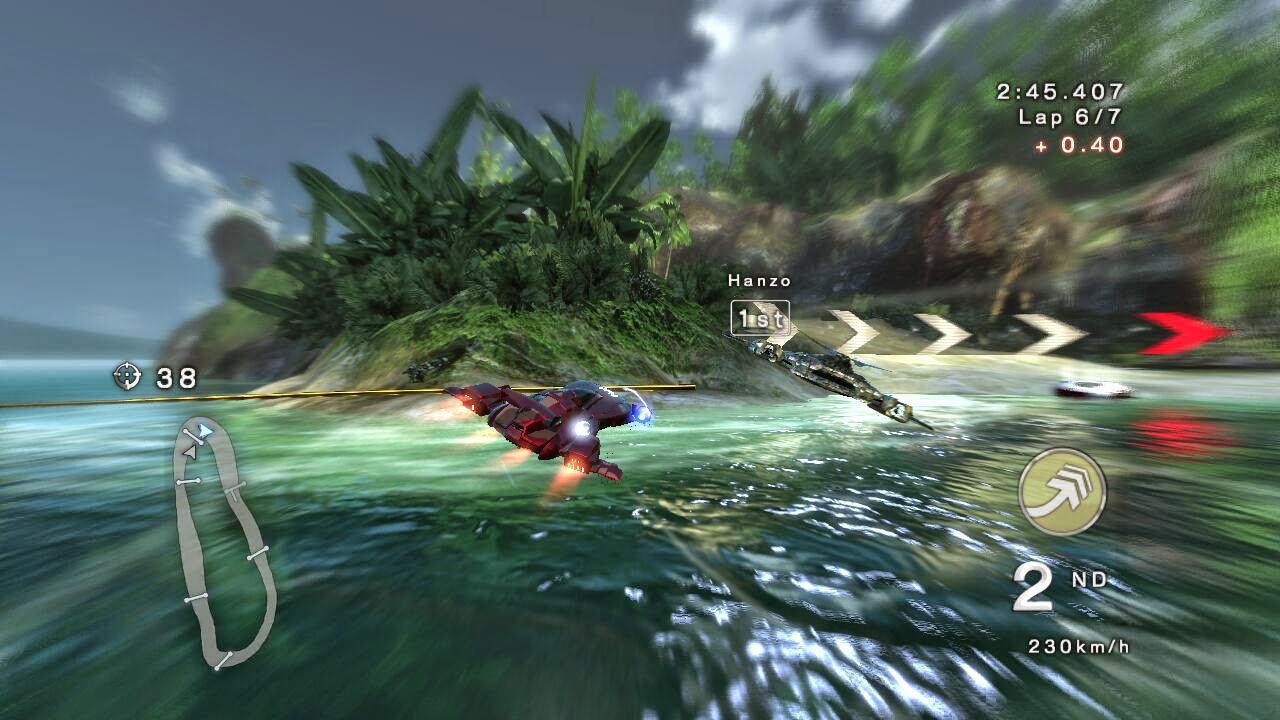 It's not always easy to know which craft or upgrade you might need though, as each competition features several different kinds of race. The most common kind is the Melee which is a general free-for-all really, with all power-ups active and no special rules. Another kind is Velocity which includes only the speed-based power-ups, which means boosting around as quickly as possible is the priority here, and there are also Magnet Mayhem races where only magnet power-ups are available, but an effectively-unlimited supply of them. Probably the most difficult type of race is called Knockout where the last-placed craft is eliminated after each lap. You will no doubt prefer one type of race over another but it's nice to have the variety, and they all work well. 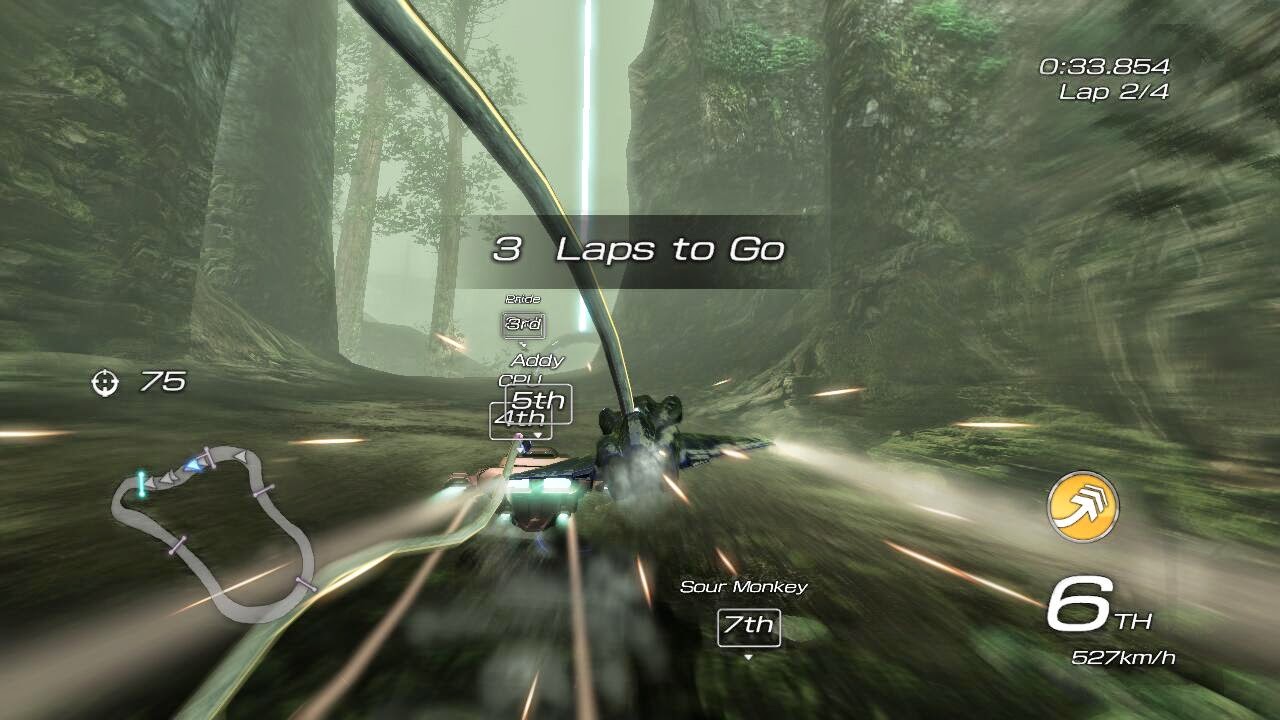 All the different races feature eight craft (including your own) and are set over seven varied locations ranging from the tropical Paradise Isle and the Endor-like Deepwoods Pass to the harsher environments of Glacier Bay and Lost Canyon, and they are one of the best parts of the game. Purely as racing circuits, they're pretty average for the most part - decently designed, varied, and with a few memorable parts here and there, but the graphics used to portray them are really nice. Obviously the courses set around the tropical locations are the most appealing with their glistening waters and lush foliage, but even the more spartan, rocky areas are crisp and realistic. Everything moves very smoothly too, and there are some nice weather effects (sandstorms, rain, etc). 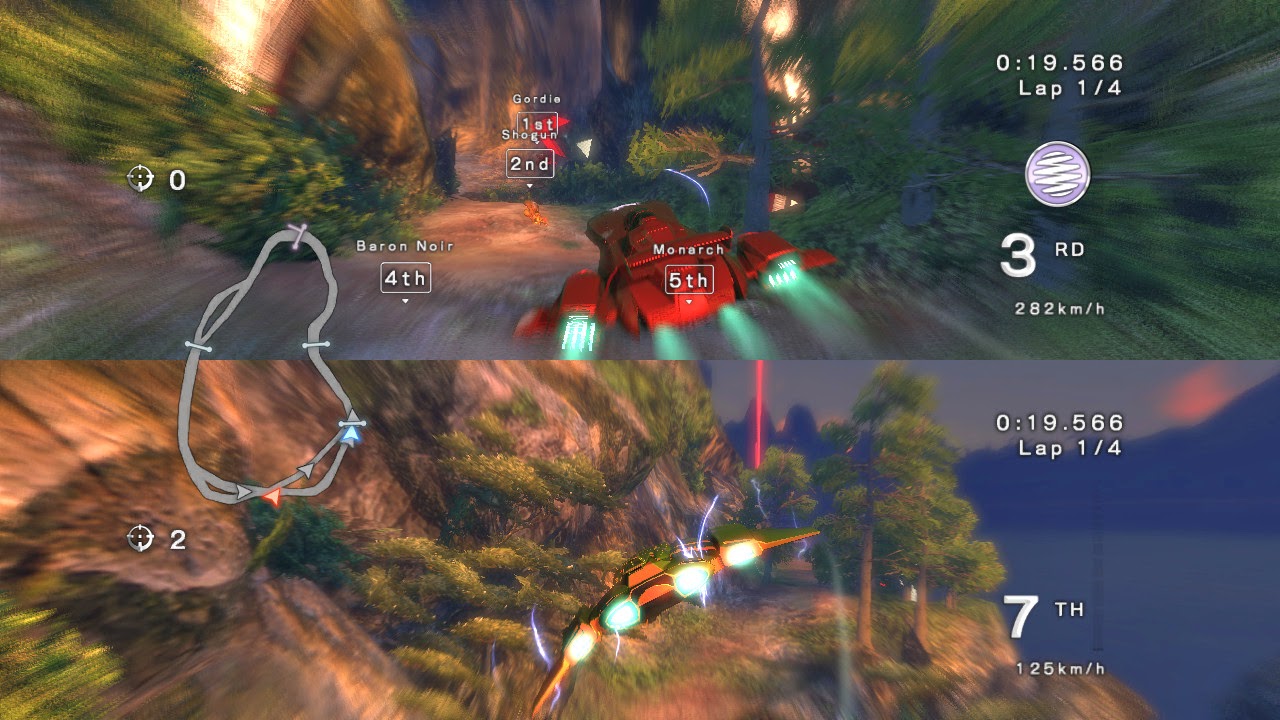 There's a surprisingly-decent total of 59 courses altogether, evenly distributed across the delightful environments, and racing around them all is generally an enjoyable experience. The pretty graphics are complemented by a nice trance style soundtrack, and control of your craft is quickly intuitive. As well as the basics, it can perform a barrel roll (which dislodges pesky magnets amongst other things) and you can also use a handy feature called 'brake-boosting' - if you hold down the brake and accelerate buttons, your boosters will charge up, allowing you shoot forward when you release the brake. The longer you hold it down, the bigger the delay but the bigger the boost too. Unless you leave it too long and blow up your engine of course. 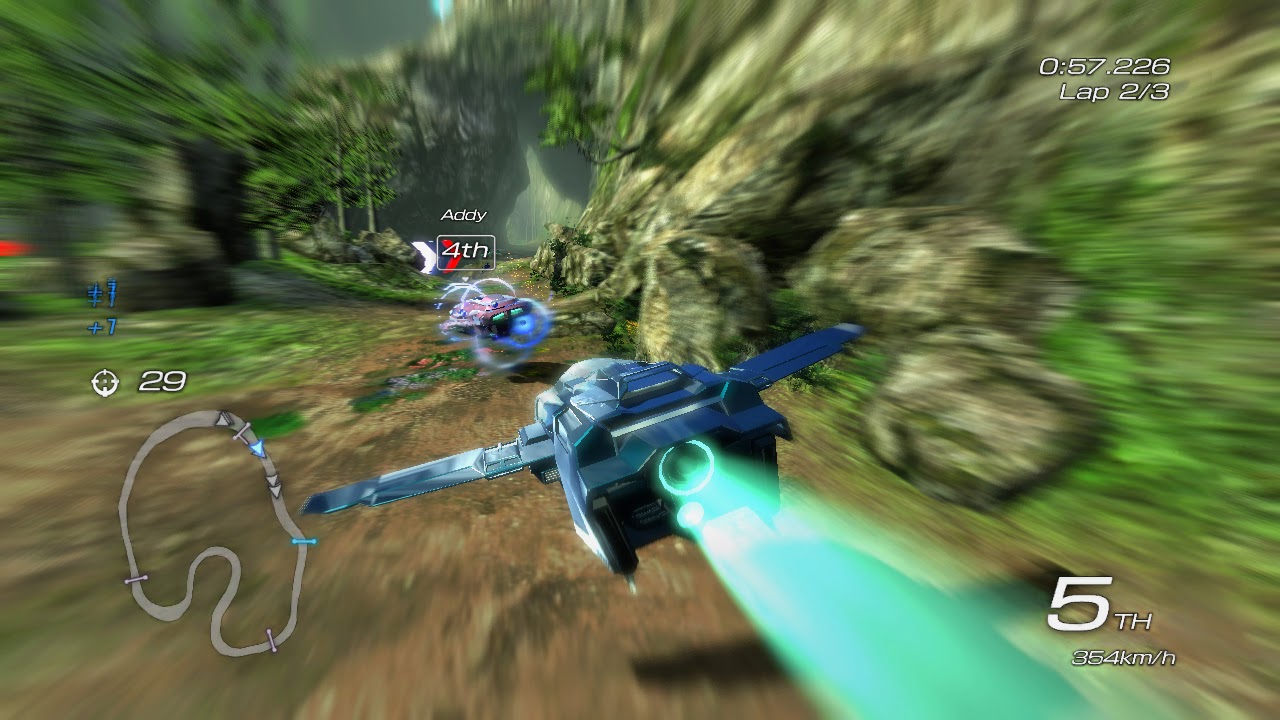 There is one thing about the racing I didn't really like though. Each course has a series of checkpoints in the form of archways that span the 'road', and if you miss any of them (which is entirely possible), you have to stop, turn around, go back, and then go through it. As you might imagine, this effectively renders your race unwinnable. I guess this isn't the fastest game around either (despite some fancy blur effects), but these are about the only issues with Fatal Inertia. There are lots of courses, the play modes will keep you occupied for a good while, and there's even a split-screen option as well as the online multi-player races. It's not as fast and exciting as F-Zero and it's not as 'cool' as Wipeout but this is still a solid little hovercraft racer all the same.