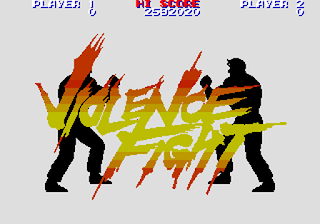 You don't have to play through the game as Bat though - he is but one of four selectable characters hailing from different parts of the U.S. Bat Blue is a street-fighting champion from Cali, Ben Smith is a marine from Nevada specialising in boxing, Lick Joe is a pro-wrestler from Oklahoma, and Lee Chen is a martial artist from Florida. Once you have selected one of these formidable 'quarrellers' you must defeat the other three followed by two tough boss fighters, Ron Max, a stock farmer from Texas, and Tony Won, a gangster from New York. Each fighter's repertoire of moves is performed using three buttons - punch, kick, and jump - and each also has their own enclosed arena. Nothing unusual there of course, but here the occupants can move around in all eight directions rather than just left-to-right, so it plays a little differently to most one-on-one brawlers.

Fights are decided over a 'best-of-three' rounds and there are a total of six opponents - the three other selectable characters, the two boss fighters, and finally a mirror match, and that means the end-of-game battle is against yourself! The offensive moves needed to win these bouts are quite limited in number though. Besides the basic punches and kicks (and jumping varieties of both), you can perform throws, duck incoming attacks (or attempt to), and each character also has a special punch and kick attack performed by pressing the relevant button in conjunction with the jump button. Some stages also have the odd item that you can pick up and throw at your opponent (such as barrels) but that is about the extent of your offensive options, and that was a bit disappointing to be honest. Still, it shouldn't matter as long as everything else is tip-top, right?

Unfortunately, it's a bit of a mess. This is mainly down to the fighting mechanics which are somewhat shoddy to say the least. The simple controls aren't particularly responsive, the collision-detection is a bit hit 'n' miss (pun intended!), and the difficulty is unbalanced as well - the first two opponents are easy but the third is suddenly about a million times harder, and the bonus rounds (where you face a tiger) are ridiculous - you can only hit it when it jumps as it's too low otherwise! The graphics are quite poor too, especially the animation, and the music is so anonymous I wasn't even sure there was music at some points. I guess it can be reasonable fun in short bursts, particularly against a friend (partly due to the unintentional humour), but it's all rather clunky and there are so many better examples around. I like Taito a lot but this must be one of their poorest titles. And what the hell does 'Dogoon' mean?