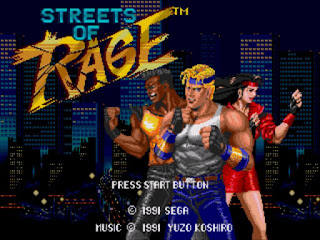 The three arse-kickers in question are thus: Adam Hunter, who has good strength and jumping abilities but poor speed, Axel Stone, who is strong and fast but can't jump very high, and Blaze Fielding, who, being the girly, is all leapy and lightning fast but rather lacking in brute force. There are eight side-scrolling stages altogether, viewed from a slightly angled overhead perspective, and each is filled with many punks, thugs, hookers, and all sorts of other fighty guys and hoodlums of all shapes and sizes, with a larger, stronger boss guarding the exit. They're pretty numerous and some of them are rock hard but taking them out is very satisfying for the most part, thanks mainly to the decent range of moves available. Similar to Golden Axe, there is just the one attack button, as well as ones for jumping and special attacks, but they allow enough variety to keep the arse-kicking interesting.

Rapidly pressing the attack button will unleash a flurry of punches and kicks. The exact composition of the combo depends on how close you are to the enemy (as well as which character you're using) and you can also perform jumping kicks and a quick rear attack. Even better, moving right up close to an enemy will see you grab him. From here you can administer various close range attacks such as knees and elbows, you can throw them (taking out any other enemies they hit as they fly), and you can even jump over their head and then slam them into the ground suplex-style! This, as you might imagine, is tremendously enjoyable, and when a friend is participating you can 'grab' the other player and perform special two-player-only moves too. Your only other method of bringing the hurt is the special attacks. You get one per life and they see your ex-police buddies raining rocket-propelled fire on your position, which harms all enemies while leaving your fire-proof hero remarkably uncrispy.

On the odd rare occasion, you can pick up an extra special attack and other collectibles include equally rare extra lives as well as far more common apples (which restore a portion of your health), turkeys (which restore all of it), cash (for points), and several fine weapons including knives, bottles, smoke grenades, baseball bats, and pipes. These can only be dropped a few times (which happens when you get smacked) but prove mighty useful while you've got them. The bat and pipe in particular are so effective, in fact, that they almost seem like a cheat mode! Even with them, though, Streets of Rage is a game that gets pretty tough. The first couple of stages are a piece of cake, with some enemies just wandering around aimlessly and only lashing out occasionally, but from the second boss onwards the enemies are much more aggressive as well as more numerous, and things get noticeably harder.

It's not always the fairest game in the world either, if I'm honest. It plays very much like a non-fantasy Golden Axe but, later on at least, overwhelms you with enemies more than that game ever did. You will often get knocked straight back down after getting up and 50/50 confrontations almost never end in your favour, especially when facing bosses, against whom only certain moves seem to work at all. I don't think Streets of Rage was ever heralded as a pioneer or innovator as far as its gameplay is concerned though. It's a really solid example of the genre in that regard but doesn't offer much that others don't. What made it stand out was how stylish it was. A big part of this was the thumping soundtrack by Yuzo Koshiro which featured over twenty tracks of superb electronic dance beats to which you may 'large it' if desired. While later SoR games equalled or even bettered it arguably, it's still to this day considered one of the greatest chiptune soundtracks ever composed, and with good reason too.

It wasn't particularly slouchy in the graphics department either. There aren't too many different enemy characters - only five not counting bosses (or colour variations) - and the backdrops are all urban-based, but the detail is good, the designs are great, and, more importantly, everything moves quickly and very smoothly. Many gamers prefer the sequel, which is understandable, but this first outing was a superb game in its day, providing more than sufficient compensation for Megadrive-owning Final Fight fans. It wasn't just a stopgap to sate the appetite either, but a genuinely good fighting game in its own right, and that's still true today. It's not quite as polished as Streets of Rage 2 and many aspects are marginally inferior (smaller sprites, simpler stages, etc), but it still looks and moves nicely, sounds brilliant, and is tremendous fun to play. It may not be original but it had (and has) it where it counts.