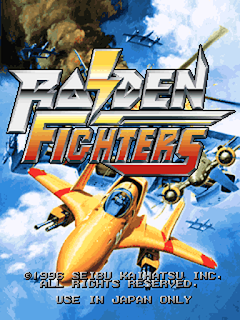 It's a slightly shorter game than the original - only seven stages this time - but most other aspects of its design are very similar. It's obviously a vertical-scroller, set over similar terrain (airfields, forests, battleships, etc), and features a crapload of tanks, aircraft, choppers, and gun emplacements, all peppering the screen with trillions of bullets. The biggest difference is the choice of five fighters to play through the game as (with a couple more secret ones available if you know where to look). All of them come with an initially weak forward shot but have different laser and missile weapons that can be powered up to very satisfying levels, and all ships can be joined by 'slave' drone ships with reasonable firepower of their own. 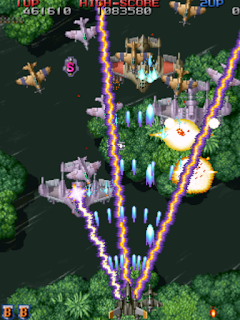 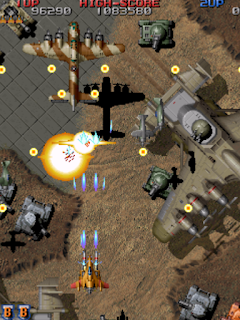 Sadly, this offensive variety hasn't made the game a great deal easier to play. The number of enemies can get overwhelming at times and their bullets, whilst not quite in 'bullet hell' territory, are still very numerous and some travel really fast. It isn't as unforgiving as some shmups though, with power-ups being scattered around the screen when you lose a life which can then be re-collected. It does look pretty nice too. Some of the sprites can seem a little pixellated at times but there's a good variety and most of the backdrops are great including a nice Arctic stage, and the (player) weapon effects are pretty sweet. The music is much more of a mixed bag, with some really good tunes but some awful ones as well.

Apart from the swanky new ships to pilot there's very little here that Raiden players won't have seen before but I did rather enjoy playing it. The action is fast and relentless but not terribly unfair, it just requires a lot of practise, and to be honest I would probably have enjoyed playing it even more if I hadn't been competing against mostly superior players (I finished 10th out of 11 players!). Oh well, something else I probably won't have time to rectify, but that doesn't mean I don't want to return to the game. There are a few small niggles and it's not as polished as some vertical-scrollers I've played recently, but it's definitely a solid enough example.