Here, however, it seems they ended up in the Delta Quadrant as Voyager finds them posing as gods on a primitive planet. It's nice to see a nod to a previous show and it's a fun episode. There's also an appearance from pesky Q who drags Janeway into the Continuum's civil war, Harry and Tuvok both fall for the same holodeck character who may not be a mere character after all, and Janeway gets killed by the heinous Vidiians multiple times in an interesting 'time-loop' episode.

Then there's Torres. Usually she's feisty enough as it is, but in one pervy episode here she gets all sweaty and super-horny and begs Tom to do her (literally). I doubt she'd have to ask too many guys twice, even if she did incorporate some angry Klingon mating habits, but for some bizarre reason Tom is umming and ahhing for most of the episode while she's gagging for it. Poor Torres, just give her what she needs! Later on in the season, Chakotay becomes a Borg drone (kind of) to heal his injuries, the Doctor becomes evil, Tuvok and Neelix pilot a super-elevator into space, Harry turns out to have been an alien prince the whole time, Kes is suddenly old and ageing backwards in abrupt jumps (this is actually one of the best Kes episodes), the doctor creates a ridiculous 'perfect' family on the holodeck, Chakotay is abducted by sentient dinosaurs, and lastly, probably my sixth favourite episode of the season.

In this one, the crew of Voyager are seemingly being replaced one-by-one by some rather bemused aliens. Perhaps they know more about what's going on that they're letting on though, who knows? Anyway, these pre-Top Five segments are getting too big now, so here are the five season three episodes I plumped for: 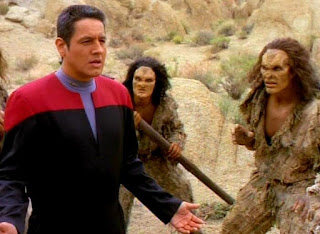 In last season's dramatic climax we saw those idiotic Kazon oafs finally achieve something by taking over Voyager (with treacherous Seska's help), and they charitably dumped the crew on a primitive planet nearby. The only friendlies left on board are the Doctor and Suder, while Tom is pootling around in a shuttle somewhere. While they try and come up with a decent plan to liberate Voyager, the rest of the crew are struggling with predatory creatures, aggressive natives, and explodey volcanoes, not to mention Ensign Wildman's bloody baby (complete with rose thorns on its head). Captain Janeway once again demonstrates her leadership skills though, and Tom gets some help with kicking those sorry Kazon arses, and before long everything is back as it should be, and it's only the inevitability of this outcome that reduces enjoyment of this two-parter to be honest. It may be the earliest such episode of Voyager's run but it isn't its worst. 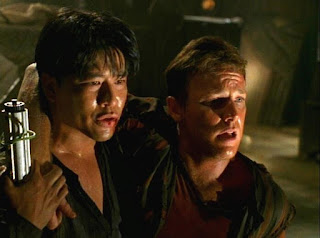 This is an unusual episode in that not only does it not start aboard Voyager but we see very little of the ship or most of its crew for the whole runtime. Two crew members we do see a lot of, however, are Tom and Harry who have seemingly been accused and convicted of a terrorist bombing and sent to a sealed - and unstaffed - prison where the inmates are left to fend for themselves. The 'chute' in question is where food parcels and new prisoners are deposited, and is their only contact with the outside world. To make matters worse, all inmates have been given a brain-implant that accentuates their aggressive tendencies. Helps keep the numbers down I guess! Unfortunately, these 'numbers' could include our boys whose chief responsibility is simply to survive long enough for the inevitable help to arrive, although Harry thinks he may have found a way out by himself, obviously. It's an episode that means nothing in terms of Voyager's overall story but it's still a memorable one with some great Tom/Harry scenes. 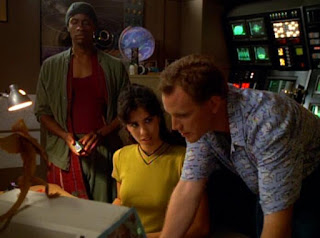 This is Voyager's first mid-season two-parter and to me it very much seems like their version of The Voyage Home. In other words, the ship and her crew get transported back in time - that time, I'm sure coincidentally, being the 'present time' of the production, in this case 1996. So, much of the the episode involves the crew trying to blend in, work out how to get back home, and all without messing up the timeline - not easy considering the guy that got them stuck there (Captain Braxton, a 'time cop' from the 29th century) arrived back in 1967 and has been living there ever since! The away team split up in their efforts to resolve all their issues, with Janeway and Chakotay dealing with Braxton (who lost his time ship and is now a crazy old scraggly hobo), while Tom and Tuvok seek out Rain Robinson (Sarah Silverman in a stand-out performance), a young astronomer who may have discovered their secret. So, much like the original crew's fourth movie adventure, it's a mixture of drama and comedy and it's also a lot of fun. 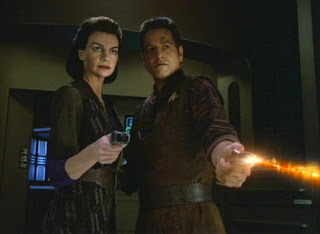 Those pesky Marquis oafs haven't been as much of a nuisance as I'd been expecting, considering their supposed hatred of the Federation and all, and this episode is about the closest we got to a proper mutiny. It actually takes the form of a 'holo-novel', programmed by Tuvok as a training exercise in case a real rebellion ever occurred, in which the 'player' can choose to fight for either side when Chakotay and Co seize power. Tuvok didn't finish it as it looked as though the crews had integrated without a problem but someone else apparently did finish it and modified it so that it can only be shut down once the story has played out - a story which overwhelmingly favours the Maquis! Being based on a holo-novel, it has little impact on any other aspects of the show, but it does serve as an interesting snippet of what this situation could've been like, and if it had happened you might say it would've been more realistic than everyone suddenly becoming best chums. 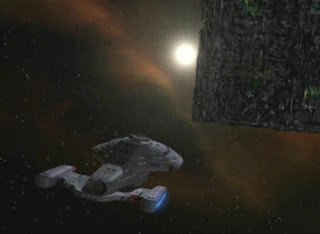 And at last, we come to Scorpion, the episode that many proclaim as one of Voyager's most pivotal. It does of course involve the first proper appearance of the fearsome Borg in Voyager's main story, and not before time either, considering the Delta Quadrant is supposedly their domain. They have very much come to prominence now though, partly as our crew have reached the edge of their space, but also because there's another even more powerful race apparently preying on them. Where most would flee in terror, however, Janeway sees an opportunity (though an extremely risky one, obviously!) that may allow Voyager to take a short-cut through Borg space. Unsurprisingly, all does not go as smoothly as hoped, but it certainly makes for a tense and exciting episode which ends on a very ominous note. It's great to see those Kazon buffoons replaced as 'the bad guys' though, the series sorely needed it, and this episode marks what for many is the show's rebirth. I'm not sure I'd go that far but it is a really good one which leaves you eager for the next.

Look out for my Season Four picks soon!