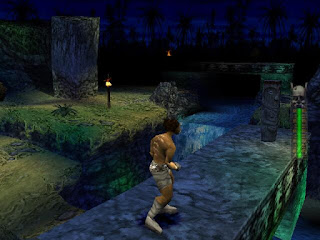 It has been a while since I played a Tomb Raider-style adventure so I thought I'd have a quick look at this one. There are no English hotties with enormous boobs here though - instead I found myself in control of a scary voodoo dude who rather unkindly has his heart ripped out on his wedding day. That must've put a dampener on proceedings! He has one chance for happiness - traverse the realms of hell collecting souls. Gather enough he will be freed - probably just in time to save his better half too. This is where things become more familiar as our presumably-undead hero runs and leaps around the gloomy world that makes up the game's three main areas. I've only explored the first one so far which is rather dark and spooky, but it doesn't look as bad as one might expect hell to look. There are no rivers of lava or tortured souls to torment you anyway! 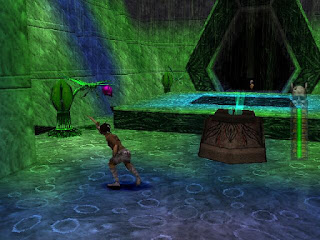 This first area is split into several sections (much like the others, no doubt) where the emphasis looks to be as much on exploring and solving puzzles as it is fighting scary denizens of the underworld. The controls seem decent enough. I found the jump mechanic a bit unreliable but either a knife/short sword or a variety of shooty magic (voodoo?) spells are available to take out the monstrous residents of each area. The only issue I had was one that often plagued games of this era - the camera. It can be manually adjusted but unless you keep stopping to do that, it can be a pain in the arse. Aside from that though, Akuji's adventure seems to be a fairly enjoyable one. The audio/visuals are quite nice - rather dark but with some nice lighting effects and atmospheric music - and there's certainly plenty to do. I would hope for a bit of variety later on but this looks like one to return to.