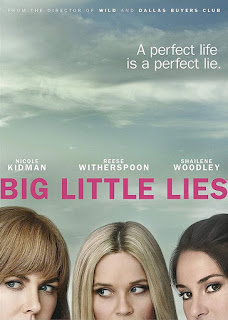 As I mentioned in a recent review, some shows are able to secure my interest in the simplest of ways - a twelve-ish word synopsis was all it took with the example in question. Pretty much the opposite is true of Big Little Lies, however. That tagline is semi-intriguing but the synopsis didn't sound too enticing to me. It talks about lives of 'success, affluence and privilege' being undone by 'lies, secrets, rivalries, and deception'. It just sounds like a soap opera, and hearing rich people complain about their drama is rarely the most appealing of prospects, even if it is based on a best-selling novel (by Liane Moriarty). Ordinarily I might've even passed it by altogether. That is, until I saw the cast which is pretty remarkable for a mere TV show.

It is headed by the three talented ladies whose faces (or half-faces) appear on all the promo material. Madeline (Witherspoon) is the so-called 'alpha female' of the town and is well-off, opinionated, feared by some but known by all. She is divorced from Nathan (Tupper) who still lives nearby with his new (younger) wife Bonnie (Kravitz), is now married to Ed (Scott), and has one daughter by each. Celeste (Kidman) is a retired lawyer and Madeline's best friend who has twin boys by Perry (Skarsgård), her husband with whom she appears very happy. Jane (Woodley) is a single mother and is new to town but despite being less well off than pretty much everyone else, is quickly befriended by Madeline and Celeste whose children go to the same primary school as Jane's son Ziggy (Armitage).

Despite the happy facade though, they all have their own issues behind the scenes. Madeline's marriage has grown passionless, Celeste is growing concerned by Perry's increasing aggression toward her, and Jane is still suffering from the effects of a rape that left her pregnant with Ziggy who has begun asking about his father. The simmering tensions increase when an incident at school pits Madeline's rival, Renata (Dern), against Jane, and by extension Madeline as well.

Madeline also has to deal with her mixed feelings towards her ex-husband and particularly his hottie wife, both of whom she regularly sees, as well an increasingly strained relationship with eldest daughter Abigail (Newton). As we saw from the opening of the first episode, however, at least some of these seemingly trivial matters are going to grow into something far less trivial indeed. Murder, in fact. Yes that's right, before we even meet any of the main players, we find ourselves amidst a murder crime scene. We don't see who did the murdering - we don't even see who was taken out gangsta stylee (possibly). It's nighttime and the location appears to be some sort of dance or party but that's about all that is revealed. It's up to us to try and work out which of the ongoing issues will be the cause.

Clues are provided by way of brief clips from police interviews with townsfolk which pop up now and then, and everyone has their own theories, naturally, but carefully watching the events unfold and relationships change over the course of the show's seven episodes should provide a few clues of its own. The growing tension between Madeline/Jane and Renata would be a logical place to start, as would the red mist that descends when Madeline's ex and current husbands are around each other.

There is also the increasingly grim situation between Celeste and her angry hubby, a bully at the primary school, and even Madeline's teen daughter is being a pain in the ass. Conflict is everywhere, basically, on one scale or another, and much of it will end up being largely inconsequential as far as the main story is concerned. It also means it's rather slow going, especially to begin with - sufficiently so that it could see some viewers giving up on it in my view. So few details are revealed about the murder that it doesn't provide that much of a hook and the day-to-day lives of these (mostly) rich folk just aren't terribly interesting at first. Fortunately, there is that superb cast to keep you watching. They must have been mighty expensive to assemble but they are as good as you would expect.

Everyone in the show does a splendid job but the focus will undoubtedly be on the three main stars more usually found on the big screen. Witherspoon and Kidman had optioned the screen rights to the novel a few years back so it was only natural they would star in it as well, and they are indeed perfect for their roles, as is Woodley who isn't far off half their age but gives a very measured and mature performance. The three characters are very different but they all show their own strengths and vulnerabilities as they attempt to deal with their various issues. 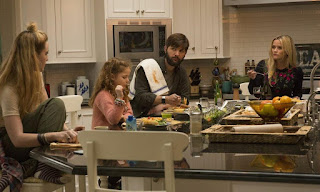 Of the remainder of the cast, Skarsgård stands out as the Jekyll and Hyde-like Perry, and some of the child actors are great too, particularly Armitage as Jane's vilified young son Ziggy, and Camp as Madeline's younger daughter Chloe. The latter is one of those 'wise beyond her years' types, particularly with regards to her musical taste, and causes many smiles with the way she talks to her mother. It's easy to forget she's only eight years old! As mentioned though, everyone is great, and that includes those behind the camera too. Music is very well used throughout, whether it's Chloe carefully selecting some classic rock on her iPod or some haunting composition adding heft to Jane's maudlin daydreams. The script is also very well crafted and it's beautifully shot. The Californian coastal town of Monterey in which the show is both set and filmed is a very picturesque place and the strong camerawork accentuates that further still.

The story does take a little while to get going and some may find the squabbles and petty disagreements of the early episodes a bit boring but, as I discovered, it's definitely worth sticking with it. As more is revealed about each character and more potential conflicts arise, it really does get quite gripping. Besides, it's basically a murder mystery show so you're going to carry on watching to find out the who and why anyway, aren't you? The stellar cast and fantastic production should make it worth your while too. It's a slow burner but ultimately a very engaging show.