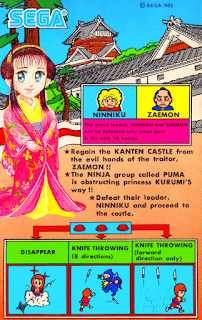 As anyone who owned or even just played on Sega's mighty Master System in its day will probably know, one of it's too-infrequently-celebrated gems is The Ninja. Many believe it to be a Master System original but it's actually a mostly-accurate conversion of an arcade game released the previous year under two names - Ninja Princess in Japan and Sega Ninja over here in the West. I've long been a fan of The Ninja so I've been intending to give the original a try for some time now and have, as you may have guessed, finally gotten around to it!

For those not familiar with the MS version, the game places you in control of the mysterious assassin of the title some time during Japan's Edo period (17th century-ish) with the aim of taking down an evil warlord and restoring peace to the land. With fire in your heart and nerves of steel (hopefully), it's your job to guide this heroic saviour through a number of unforgiving vertically-scrolling areas on foot, dispatching all the immediately-hostile enemy combatants (mostly other ninjas, as well as a few horses, naturally) who rush onto the screen at the appropriate moment or pop up out of their hiding places. Defeat the boss at the end (or 'top') of each stage and it's on to the next area, each of which poses its own unique challenge to test your mettle.

This version of the game will feel immediately familiar to fans of the MS game but there are obviously a few differences. First and perhaps foremost, as suggested by the title, you're playing a female ninja here, and one of royal blood too, apparently. I suspect the Emperor would be slightly miffed to learn of this but I guess it's too late to worry about the line of succession now. Luckily for him, she is not entirely unschooled in the ninjutsu arts - she is a dab hand with the throwing knives and is even able to render herself invisible for brief moments, which is very handy for avoiding similar projectiles headed her way - if you remember to use it which I fail to do with surprising consistency. But nonetheless, it's there all the same. The controls will also be very familiar to MS players - eight-way movement, eight-way shooting, plus a second attack button that shoots directly up the screen regardless of which way you're facing, which is perhaps even handier than the invisibility cloak.

As far as I recall, the stages are also the same here (or vice versa if you know what I mean). That means as well as the more generic grassy/wooded areas and town-based locations, you get the 'logs floating down a river' stage and the 'climbing up a rockface' stage. Indeed, most aspects of the two games are the same. The main differences are simply the gender (and therefore appearance) of the player character, and slightly different audio/visuals. While the locations are the same, they are a bit more detailed here (check the pretty flowers in the first stage, for example) and I like it a lot. It's also a bit more difficult right from the off, but I guess that's only to be expected from an arcade title, and I still managed to get a few stages in on my first few credits. If anything it's even more addictive than the MS game I've known for so long, and that means I've enjoyed it a lot! I don't know why more people don't rave about this game actually - it's fantastic, and as I've now discovered, this is surely the best version of them all.