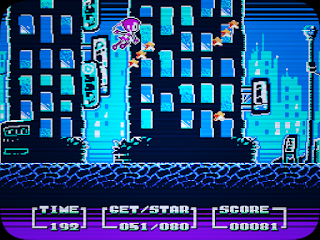 Although the NES/Famicom serves as inspiration for many indie games these days, it doesn't seem to get too much in the way of homebrew releases itself. This one caught my eye a while back though, due to its dazzling graphics and pleasing accompanying artwork. That isn't enormously surprising upon learning its creator, Riki, is a manga artist! Indeed, his talent in that field serves to make KKSN a visual treat filled with neon backgrounds and sharp sprites. Well, I say 'sprites' as in plural but there's only one really - the main character, a young girl known as Fami-chan. Further investigations reveal a game of early 80's simplicity which tasks you, as Fami-chan, with collecting as many stars as possible. These drop from the top of the screen or zip into view from the sides and you simply have to run/jump around the totally flat auto-scrolling stages collecting as many of them as you can. 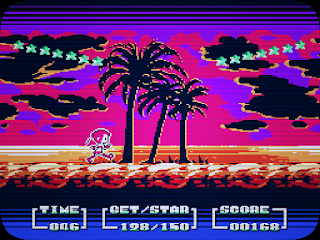 That's literally it - there aren't any enemies or bosses, nor even any obstacles. It is running on real Famicom hardware though, which makes the visuals an achievement of splendidness, and the music is perhaps even better, consisting of numerous chiptunes by the likes of Manami Matsumae and even the legendary Yuzo Koshiro. It seems likely, therefore, that the 'game' is intended more as an interactive music video than a proper game, and one I would like to experience for myself. Sadly, despite receiving a physical release on both PC CD and Famicom cartridge (with lovely box art and booklets and stuff) exclusively in Japan, it has not to my knowledge received a digital release anywhere. I couldn't even find a 'backup' rom anywhere, so this 'first look' is unfortunately likely to remain my only look at the game for the foreseeable future. What a look (and listen) it is for 8-bit fans though...

Special Note: Check out Riki's website here for more info on Kira Kira Star Night. In the meantime, have a look and listen to it in all its Famicommy glory here in this short video.