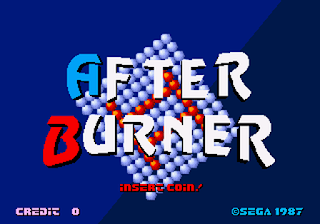 When I was younger there were a good many things that confused me. Many of these are unsuitable for discussion here but some that are included: Why do frogs throats bulge so much? Why did some cars make that whistling sound as they drive along? Why do electricity pylons crackle when it rains? What would happen if you drilled all the way through the earth's crust into the mantle? All these things and many more questions of varying importance pootled around in the perpetually-distracted mind of my youth, but one thing that puzzled me like no other was this: What the frickin' frack was After Burner 2 all about? Game sequels, and indeed sequels generally, didn't often deviate from the originals that much but you could usually tell them apart, especially if you were actually trying to, but what was the difference between After Burner and After Burner 2? Only the Lord on high knew this hallowed secret, surely?

I spent a good while playing both games but they seemed pretty much identical to me. Let's not forget, this was long before the days of the internet too (or long before mere mortals like me had access to it anyway), so it wasn't an easy question to answer. My fretting didn't last for too long though, happily, as the internet did arrive a few years later, and all my years of questions finally had answers! Whether they were right or not I couldn't say, but it seems I wasn't the only one puzzled by this After Burner situation, and the answer seemed plausible enough to me; namely, that After Burner 2 was merely a revision of the first game. Perhaps Sega rushed the original out and this revision was the game as it was intended? It wouldn't be the first time that this kind of thing had happened but it arrived a mere three months later so who knows what the real reason was?

Looking back now, I suppose the biggest addition to the 'new' game should've been one that I and others noticed - a speedo. Indeed, players could now increase or decrease the thrust of their trusty F-14 Tomcat. You might think this would've been more obvious when playing the arcade game owing to the sizeable thrust lever, but as far as I'm aware, the AF2 board was simply plugged into normal AB machines and a thrust lever was bolted on, so if you were used to a machine with the After Burner logo having a thrust lever, you might not have even known you were playing the revision! Other differences were less noticeable - the intro/start screens were different, some enemy aircraft now chased you from behind (encouraging you to up that thrust), the missiles could be fired quicker, and those with the ears of a fox may have noticed some differences with the music too.

The only other difference I know of is one that would no doubt have come as a shock to skilled players getting far into the game - three extra stages. The original game consisted of an already-impressive 18 stages but this version of the game has a finger-warping 21 stages! This is probably the best of all the additions actually, it's just a shame hardly anyone knew about it. I'm not sure naming the game as a full-on numbered sequel was the best idea in any case. Surely something like Super After Burner would've worked better? Oh well, it's all a moo point now (as Joey Tribbiani would say) - if you liked After Burner, it goes without saying that you'll like After Burner II just as much, perhaps a tiny bit more if you like flying really fast (which makes it much harder to avoid enemy missiles). It would be a thrill to find either game in its largest form in an arcade, and least I'd know which one I was playing now! Not a proper sequel but still fantastic.