Great Scott, it sure has been a while since I did one of these! If fact, it has been so long I've had to rewatch the whole of Voyager's seventh season in order to make my selections! As I now recall, it was a pretty good final season for Janeway and Co too, though the fifth season remains the best I think. Nonetheless, I had to leave out a couple of episodes I really like in addition to the ploppier offerings.

Unsurprisingly, we start the season with the conclusion to Unimatrix Zero, a two-parter about a virtual reality place where Borg get to hang out as individuals. In another splendid Seven episode, she finds her life is at risk when her cortical implants start to malfunction. We also get to be dazzled by Tuvok's investigative skills following some mysterious attacks on ex-Maquis members of the crew, while the Doctor is kidnapped and forced to work in a poorly-equipped hospital. We also get an interesting episode where Tom and B'Elanna enter the new Delta Flyer in a space race (look at their fancy race suits!). Must be tempting to just shoot everyone in front of you though! The bumbling Lieutenant Barclay also returns, albeit in holographic (and less bumbly) form, to party with the crew and help get them home. Or does he? And in a rather amusing episode, the Doctor gets Seven all hot and bothered when he gets uploaded into her implants and makes her horny (snigger!).

Getting towards the middle of the season and Harry finally gets to play captain when he takes charge of an alien medical transport, and we get another two-parter in which the stupid Hirogen make holographic prey that ends up not only wiping them all out, but also does a runner to find a safe haven, with Voyager's precious EMH in tow. B'Elanna fans will be happy about her main episode this season, where she starts freaking out about her impending baby. It's not a classic but does give us some background on her character by way of flashbacks, which is always nice.

Next up, there are moral dilemmas amongst the crew when Voyager helps to transport some prisoners who are scheduled for execution, and they also happen upon an 80-year old Klingon ship whose crew believe B'Elanna's unborn baby is a saviour. Blimey! Elsewhere, Seven spends some time trying to perfect her social skills, and Q shows up to be a pain in the arse again, this time with his idiotic son. There's also another amusing Doctor episode in which he sends a holo-novel he has written to earth which is based on his experiences on Voyager, but the crew aren't impressed by his exaggerations, or their portrayals. Rounding out the season, Chakotay and Seven grow closer after they crash on a planet populated by primitive aliens, Neelix hooks up with a Talaxian girly and leaves the ship for good, and in yet another great Doctor episode which almost made the cut, the tubby aliens from 'Tinker, Tenor, Doctor, Spy' kidnap him and force him to steal Voyager's warp core which involves incapacitating and impersonating anyone who gets in his way!

But sadly, that's yer lot as far as the adventures of the USS Voyager and her crew are concerned. Even all these years later it's a show that continues to divide the notoriously picky Trek fandom - most seem to like it to varying degrees but, of course, some still despise it. Either way, it was the first show to have a female captain in the main role, and the writers basically gave themselves license to throw anything at her by stranding the ship 70,000 light years away in the previously-unexplored Delta Quadrant, so it always had a huge amount of potential. 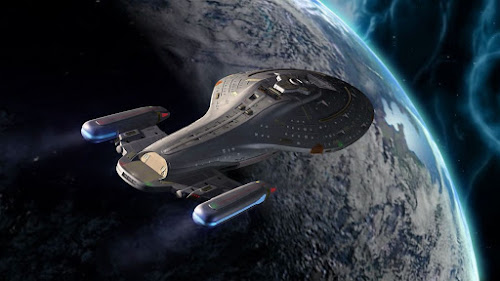 I personally liked it from the off - just in the warm, familiar way that I like all Trek stuff at first, but it grew on me too, ending up as possibly my favourite of all the Trek shows, and I was certainly bummed when it finished. I liked the sense of togetherness and family the show put across and it was home to two of my all-time favourite Trek characters in the Doctor and Seven. There were also some interesting new races introduced (as well as some crap ones) and we got a lot of Borg action since we were now on their home turf.

The ship itself is pretty cool too - sleek and fast, but small for a Federation ship, making its plight all the more challenging. Still, at least it came equipped with unlimited supplies of... well, near enough everything, most notably torpedoes and shuttles (chortle!), and it was a tough old bird. Good bye, NCC-74656. Lets hope we get at least a glimpse of you in the upcoming Star Trek: Picard show. 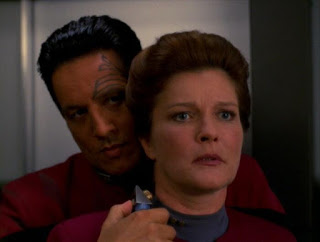 We haven't had too many decent Chakotay episodes really, but I do enjoy this one in which our hapless Native American finds himself flooping back and forth between different times! This is caused by a 'chronokinetic surge' which hits Voyager, dividing the ship into several time zones, both past and future. As a result, we get to see Seska and her idiotic Kazon cronies again, Seven as a Borg drone, likewise with cronies, and we even see Naomi Wildman and Icheb as adults. Perhaps most interesting of all the 'zones', however, is that of the bridge which is from before the ship left the Alpha Quadrant, and the Janeway that occupies it therefore has no idea who Chakotay even is! He manages to get her on side anyway of course, and the two of them pootle through the ship trying to fix everything with a 'greatest hits' of past Voyager things/events making guest appearances as they do so. It's an episode that stretches Trek's scientific plausibility to its limits but it's good fun too. 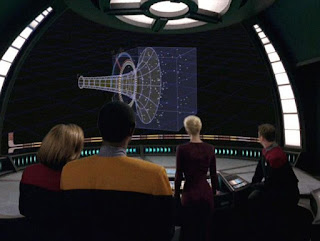 Ships in Star Trek seem to find an awful lot of never-before-seen spacial anomalies, but it's okay as they usually make for some good episodes. The one contained herein is known as 'The Void' and is... well, a void - an area of space absent of any matter, and in which Voyager is now stuck. Inside, they find numerous other ships that are also stuck, some of which have resorted to attacking and raiding the others for supplies. Voyager itself quickly becomes a target too, with their food, fuel, and even computer consoles getting half-inched, with covetous eyes also lingering on their photon torpedoes. I'm not sure why they didn't just hand some over since they apparently have an infinite supply, but naturally this doesn't stand with Janeway who gets all Starfleety about things and tries to form a mini-Federation. There is, of course, one particularly dastardly ship/race against which the new alliance must unite, and other weedy races that they must save, and the outcome is predictable enough, but this is a very enjoyable one all the same. 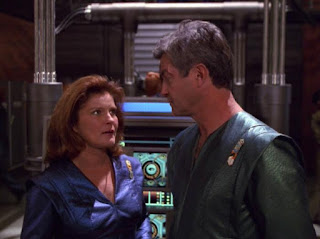 By jove, another two-parter? Yes indeed, I seem to recall finding this one rather unremarkable upon first viewing but it has grown on me over the years. Right from the start of the first episode, a vast majority of the crew are seemingly happy workers in a power-plant along with hundreds of others. As we later learn, only Harry and Chakotay escaped the chains of servitude by way of being on an away mission in the Flyer. They eventually find Voyager hidden in a nebula by the Doctor. After fixing the ship up, they then need to find out where the crew have gone and how to get them back, especially as they have no memory of being on Voyager to begin with. Their lives on the planet seems pretty good too - Janeway hooks up with some guy, Tom becomes a carefree barman, and Seven gets to boss everyone around at the plant. Nefarious stuff is afoot though, of course, so Chakotay and Co must act quickly! One of the highlights of the episode(s) is the Doctor's prolonged stint as the 'Emergency Command Hologram', much to Harry's chagrin, but it's great to see Janeway and some of the others free from the stresses of Voyager life too. I can't help wondering if it would've worked just as well as a single episode though. 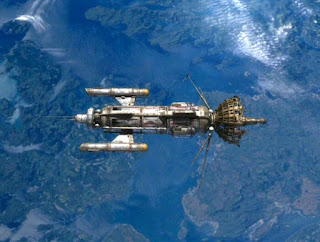 This episode is highly notable for one reason - it marks the first time since the pilot episode, seven loong years ago, that Janeway has received a mission from Starfleet Command. Cripes! The mission in question is to retrieve the probe of the title, launched by earth before the starship era, and sent into deep space to make contact with alien species. Unfortunately, the species it found made use of its technology without understanding the potential dangers, and ended up devastating their planet. With the heavily irradiated descendants of the survivors blaming humans for their plight, they take the search party captive (including a redshirt - I'm sure you can guess what happens to him!). The episode does make an interesting point though, about how risky, reckless even, it can be for an emerging spacefaring race to start sending their junk out into the galaxy. The affected party could've had a more sympathetic leader but I suppose his stance is worsened by Janeway's apparent reluctance to accept responsibility on behalf of us in the first place. The typically-Voyagerish quick, easy resolution to the episode is a bit of a wasted opportunity too, but I still enjoy this one. I think a similar story to this was reused in Enterprise actually. 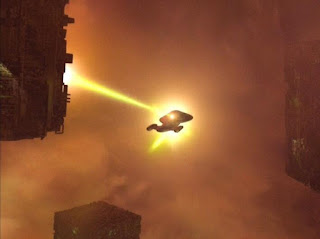 Yes, that's right - the series finale obviously earns a place in this list. After seven years and 170-odd episodes, the battered-but-trusty USS Voyager and its gallant crew headed by Captain Janeway finally make it back... home. Many feel this fan-pleasing conclusion to the series was achieved a little too easily after all this time, and it's true that the writers could've gone in many different directions in the end, including not even bringing the ship home at all, but ignoring the episode's few flaws and raised questions, it's hard to think of many more air-punchingly awesome moments in the whole of Trek than you have here, and we get more than one of them! Yes, it would've been awesome to see the ship actually land, the crew warmly greeted by friends and loved ones, and even get the ticker-tape parade we've heard about before, but instead of focusing on what we didn't get, why not marvel at what we did get? Who doesn't get a thrill from seeing a enormous Borg Cube destroyed by a single torpedo, for example? I can't help but worry about how much they must've pissed off the Borg and put earth directly in the crosshairs of their revenge-cannon though, but I still love this episode every time I watch it. Heart-warming, thrilling, satisfying, and a great send-off for a superb crew and show. I miss them.

And now it's on to the next Trek show, which will probably be Deep Space Nine. Look out for my picks from its first season soon(ish)!