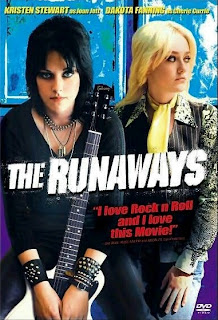 The 70's must've been a fascinating time to live. Granted, I saw some of its years but I was far too young to notice anything much and had to discover it all later on. Among these things was music. A lot of music. The decade is now remembered for many reasons but one of the prevailing legacies of the 70's is not only the number of talented musicians to emerge, but also the amount of innovation and new styles that appeared. The end of the decade is probably most famous for the punk explosion but their preceding years were also notable. I'm sure pretty much everyone has heard of Joan Jett but I for one was far less aware of the band in which she previously performed - The Runaways.

She was pretty much born to be a rock star. From an early age it was Joan Jett's (Stewart) ambition to form as all-girl rock band, and after intriguing record producer, Kim Fowley (Shannon), with the proposition after a chance encounter, it starts to look as if she may get the chance. Elsewhere, the vulnerable, 15 year-old Cherie Currie (Fanning) is busy dealing with her difficult home life as best she can, including entering a school talent show as a glammed-up David Bowie. Meanwhile, having added a drummer and bassist to Jett's guitar skills, Kim is on the lookout for a 'Brigitte Bardot' style frontgirl. As luck would have it, she just happens to be among the revellers at a nightclub where Joan and Kim are scouting for suitable candidates.

And so began The Runaways. From their first rehearsal in a small trailer to their first tour to their first record deal... it's all captured here in glorious period detail. Obviously their story is greatly condensed, and some liberties have been taken with the subject matter, as confirmed by the real Cherie Currie in a recent interview. The trio of Jett, Currie, and Fowley dominate the screentime with remaining band members Sandy West (Maeve), Lita Ford (Taylor-Compton), and Robin (Shawkat) relegated to the sidelines somewhat. However, some delving reveals at least part of the reason for this. West sadly died in 2006, so obviously couldn't participate in the film, Ford refused to participate, and Jackie Fox apparently wasn't even asked to for some reason, and didn't appear in the film - the fictional character of Robin was created in her place.

Given the prominence of the three main characters in the film, and the challenging roles they were required to perform, their casting could make or break this film. Happily, they are all outstanding! Shannon is superb as the slimy, lecherous Fowley but it is the girls who are most impressive. Kristen Stewart is of course the girl of the moment, what with the huge success of the Twilight films, but she's been acting a lot longer than that. She really looks the part as born rebel, Jett, and her dedication and determination to see her dream reach fruition is clear to see. Even more impressive is Dakota Fanning as Cherie Currie, the author of the book on which the film is based. I don't know about anyone else, but the last time I saw her, she was a young girl of 11 in War of the Worlds. It was a good bet she'd soon turn into an attractive young lady, but the transition seemed sudden. Here she is strutting her stuff in lingerie, singing sexually provocative songs (and yes, it is her singing), and even sharing a girl-on-girl kiss. Her immense talent as an actress has been evident since she was half the 16 years she was when this was filmed, but it's still strange that it even is her we're watching. She should go a long way.

The birth, rise, and inevitable fall of The Runaways is well known to some and unknown to many, but regardless of your knowledge of the 70's music scene, it's an interesting story from a fascinating time. Sure, stories like this have been done to death but this is definitely one of the better band biopics around. The quaility of the acting alone is worth the price of admission here, but director and screenwriter, Sigismondi, has skillfully recreated a slice of the 70's here with a fantastic atmosphere (helped by the soundtrack, of course). Yes it feels a bit rushed, and if you have no interest in music from the era, the acting along may not hold your attention by itself, but the majority of viewers should enjoy this one a lot.