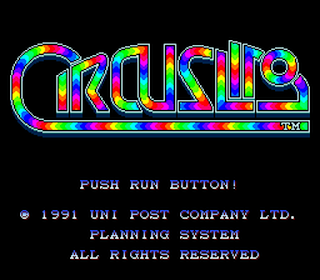 I've always been a big fan of these so-called platform/puzzle games despite seldom being very good at them, so I'm always happy to discover a new one, and this is a pretty obscure one! I've been able to find out very little about it but it appears to be a Japan-only release which could go some way to explaining that. As you probably hadn't guessed from the somewhat peculiar title, the star of the game is actually a little chameleon who goes by the name of Leon. Under your control, it's his job to clear each of the single-screen stages of insects. To do this, he must lick them up with his long sticky tongue, carry them one at a time to the deadly (not to mention hungry) carnivorous plants that also populate the stages, and then proceed to regurgitate them so the plant can eat them! The insects are of course scattered around the screen in some awkward corners which necessitates our hero clambering around the many platforms. The only problem here is that he can't jump!

Instead of leaping about the place, or even using ladders, our lizardy friend has a more novel approach to getting around - he can use his curly tail to pull himself up! He can only do this with certain kinds of platforms though (the slightly thinner spirally ones), and they are of course carefully positioned, and this is where the puzzle element comes in - trying to work out how to even get to certain parts of the screen can be a real test of the grey matter, even early on. Some of the platforms are moveable too. These are colour-coded and have a small gap in them at which point the chameleon can climb up. Simply press the relevant button to move the platform left or right so the climbable gap is in the right place. Somewhat surprisingly (though mercifully), you are not burdened by a time limit here, and even more surprisingly, contact with the insects does nothing to our lizard friend. In fact, most insects will actively avoid him, but some are able to attack by firing or dropping projectiles.

These do kill hapless Leon, as does straying too close to the hungry carnivorous plants that you have to feed the insects to, and there are also spiky platforms which kill you on contact (which look very similar to ones you can use to pull yourself up), but the biggest challenge here lies in working out how to move around the screens. And therein lies both the good and bad sides of Circus Lido. It's a novel approach to the genre and has some great, pretty original ideas. The only problem is, it gets too hard, too quickly! I like to play games all the way through before I review them here but I am simply unable to finish this one. In fact, I doubt I'll ever get anywhere near the last of the forty single-screen stages that lie before you here. This, combined with the game's obscurity resulting in little online reference material, means I don't really know a lot about it. There may well be some things I don't know about the game that might make it easier.

For instance, when you eat one of the basic blue insects (I think they're cockroaches or something), your chameleon can walk faster while it's in his mouth, so it's not inconceivable that eating the other kinds of insects bestows some sort of special ability upon him too, although my best efforts to test this theory have proved fruitless so far! With all this in mind, it's difficult to really know what to make of this game. Technically it's proficient enough, though hardly pushing the mighty Engine to its limits. The graphics are quite dark for the most part, though give way to the odd, often very bright splashes of colour (see above!), and everything is tidy and nicely detailed, but there isn't a great deal of variety (as far as I've seen, at least). The tiled backgrounds are okay though, and the music is... interesting - quite peculiar but catchy and enjoyable, and seems to suit the game well. As far as actually playing the game goes - I enjoyed it a lot... until I got stuck! 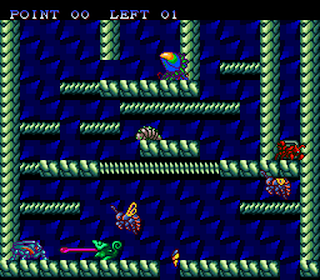 Our brave hero Leon moves rather slowly around the various stages (much like a real chameleon would, I suppose), and when you make a wrong move it can (and frequently does) result in the stage becoming unwinnable, so you have to give up and start again (there's even a 'suicide button', as if to illustrate the point). Luckily each stage has a password though, so if you run out of lives you at least won't need to keep starting from the first stage over and over again. When I first played this odd game I really liked it. It's quite original, has some interesting ideas, looks and sounds fairly pleasant and is definitely intriguing... It seemed like my sort of game, but it has just proven to be too tough for little old me. I noticed a bug (no pun intended) too, whereby the plants don't always eat the insects, which definitely doesn't help! I'll keep trying it as it is very addictive, and I want to do well at it, but unless any of you know any tricks I can try here, I'm not sure how much further I'll get!