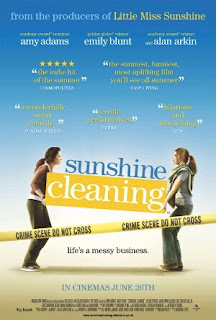 There are a few films that, rather than ease you in with a plot-teasing hook, instead go for the explosive opening to drive home a point. This is one of those films. The point it demonstrates? That death can be messy! The film opens with a normal, middle-aged, respectable-looking white guy who, after spraying breath freshener in his mouth, calmly walks into a gun shop of the type that are so prevalent in the US, asks to see a specific type of shotgun, and proceeds to spray the contents of one of its shells into his mouth as well. The resulting mess, we learn with the help of police detective, Mac (Zahn), is hard and time-consuming to clean up. Enter sisters, Rose (Adams) and the younger Norah (Blunt). The former is a single-mother and part-time cleaner who life hasn't really worked out for, and the latter is a lazy waster who hasn't really tried to work out life.

Having just been fired from her latest dead-end job, Norah is reduced to babysitting for her sister while she sneaks off for some rumpy pumpy with Mac, her high-school sweetheart who ended up marrying someone else. It's here during some post-coital natter that Mac casually mentions to Rose that there's a lot of money to be made cleaning up crime scenes. Almost immediately she lines up her first job and arrives, sister in tow, ill-equipped and completely unprepared. Rose soon starts to realise this and, with the help of one-armed supplies wholesaler, Winston (Collins Jr), begins to actually learn the trade. Norah, meanwhile, is busy meddling in the lives of the recently deceased, particularly the daughter of their first 'job', Lynn (Rajskub). All the while, their wacky father, Joe (Arkin) is busy looking for the next get-rich-quick scheme while babysitting Rose's son, Oscar (Spevack).

It's certainly an original premise! I'm personally a big fan of this kind of US indie. You know, the kind that's hard to categorise. The kind that, if you explained it to the average person, they'd think it sounds weird, boring, or both! One of the things I like about films like this is the kind of actors they often attract, and Sunshine Cleaning is another - it has a fantastic cast including rising stars, Adams and Blunt, both of whom I've liked since I saw them in Junebug and My Summer of Love respectively. They both give great performances here as they try to get their lives back on track, with Blunt in particular, who now appears to be challenging Zooey Deschanel for resident indie 'kooky outcast', being particularly impressive. 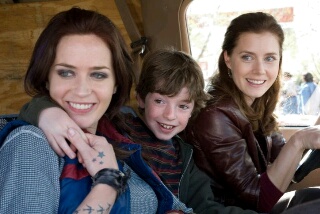 Alan Arkin pretty much continues his Little Miss Sunshine role (which is by the same production team, coincidentally), but that's certainly no bad thing. Mary Lynn Rajskub (24's Chloe) is also good as Norah's new friend, Lynn, although she seems to be continuing her run of 'most screentime without smiling'. Great performances aside, there's a lot to like about Sunshine Cleaning. Its subject matter gives the film the potential to be much ;darker than it is, and some opportunities for jet-black humour went begging, but it remains a highly enjoyable, feel-good film with plenty of quirky comedic moments.