Soon after arriving home from the family holiday mentioned in 'Gaming Memories Part 1', I was suddenly obsessed with the videogames I had previously had little interest in. Chief among my obsessions was the amazing OutRun. It wasn't long before I discovered that this 'Sega' company who made OutRun also had available a home console, much like the Atari VCS I had briefly flirted with at a friend's house. After some investigation I found that there were three variants available - the Master System, the Master System Plus, and the Super System. 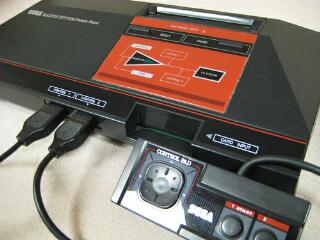 Apparently this flashy-looking box of tricks also had some flashier-looking accessories. Namely, the 'Light Phaser', which, excitingly, looked like a blaster from Star Wars, and the '3D Glasses' which looked cool even before I found out what they were for. The basic Master System pack was just the console with a control pad and a built in-game. The Master System Plus also came with the Light Phaser and featured an additional built-in game. Lastly, included with the Super System was both the Light Phaser and 3D Glasses, and a built-in game that took advantage of both. Naturally, I decided I wanted the latter! The day I found all this out was an exciting one. I stayed up all night trying to work out how I could have this great console. I didn't want to wait for Christmas, I wanted it straight away!

After some pretty brain-bending calculations, I discovered I could pay my parents back £3 per week from my paper-round if they bought me the console I so desired. After a hard fought campaign, they finally relented. Unfortunately the Super System was unavailable but they did buy me a Master System Plus with three games, and some 3D Glasses separately. Two years of paper rounds then ensued, all proceeds going to this cause. It didn't matter though - I had Outrun!

My trusty Master System would go on to keep me entertained for many years. It even persuaded my best friend, Luke, to buy one of his own, and he was lucky enough to get a proper Super System! Before long we were spending a lot of our time at each others houses, challenging each other at our favourite games, with both of us becoming firm Sega fanboys in the process, an allegiance which it took the SNES to break, and even then our hearts always remained in the Sega camp. Luke and I both have our favourites on Sega's first console offering (outside Japan), but after my visit to the late, great Microland with my parents, I came away with the following games...

I was unsurprisingly eager to give my fancy new Light Phaser a try and this was the first game I tried when I finished unwrapping my shiny new Master System. It was built into the console itself but was also available separately on one of those combo cartridges and is essentially the Master System's version of Duck Hunt. Accordingly, it's your job to shoot as many of the innocent-looking creatures as you can over the three different single-screen settings which repeat over and over until level 69 (giggity). Well, apparently - I never played it that long! The object is to shoot as many creatures as possible before you run out of bullets. If you've surpassed the required score you'll progress to the next screen. If not, game over! Despite its horrifying un-political correctness and extremely limited nature, this was actually good fun in short bursts and I played it often. Light-gun games didn't really hit their stride (in the home, at least) until the 32-bit era (with Virtua Cop, et al) so this was one of my few experiences with them, but I have happy memories of it. 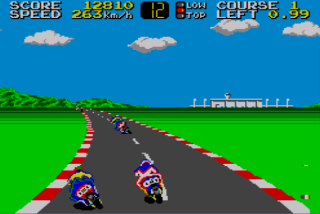 This conversion of the hit coin-op was impressively released in the same year as its parent and was another game that came built into my Master System. The object is simply to keep racing for as long as possible until your time runs out. While doing this, the game cycles through four different backgrounds (including a nice night-time stage) and the road is packed with other racers, although they are only there to get in the way - there's no actual race positions or anything and you do of course blow up if you touch any of the obtrusive oafs and lose precious time getting back up to speed. It's still great fun though - it's fast, addictive, and requires skill rather than luck to progress in. I probably ended up playing this one more than most of my cartridge games and it's still highly enjoyable today too. Top stuff! 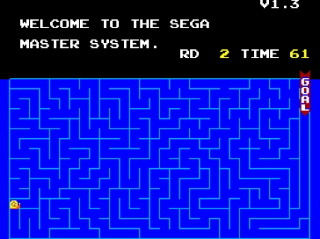 I had been using my trusty Master System for a good few months before I got around to reading the instruction book that came with it, and upon doing so I was surprised to discover there was another game built into it! It seems that on certain models of the console, if you turn it on with no cartridge inserted whilst holding 'up' and the two buttons simultaneously, the resultant treat is the now famous Snail Maze! It's a very simple game too - simply guide the small snail through the complex maze to the exit within the (very) strict time limit. There are twelve mazes in total and if you fail to reach the exit of any of them within the time limit you'll be dumped back at the start of the whole game. It's a bit of a trial and error, memory-test kind of game really, but again, it's fun in short bursts and that bloody tune will drive you insane! 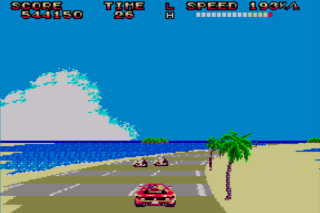 Ah, the very reason I had a Master System! I had the choice between this and the standard 'non-3D' version of this game in Microland on purchase day. I naturally assumed they would be the same, aside from one making use of the 3D Glasses and the other not. I was incorrect. I didn't play the non-3D version until later on Luke's MS but it turned out it was a lot faster and harder! This version plays nicely enough though and, despite being a bit too easy, was very enjoyable at the time. The 3D effect was quite impressive too and handily the game had a 2D option as well, and the Master System's sound chip does its best to replicate the iconic music of the arcade behemoth. It's not the greatest driving game of all-time but hey - it's still OutRun! 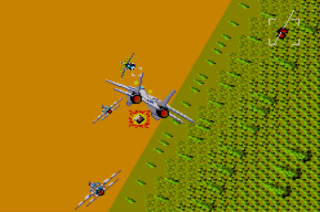 Another conversion of an immense arcade machine (you have to call it a 'machine', it seems wrong just calling it a mere arcade 'game'!), and one even more impressive than OutRun from a technical point of view. The much less-powerful Master System actually has a good stab at replicating its parent and even proved to be one of the more faithful home versions of it. Piloting the iconic F-14 Tomcat, it's your job to blast your way through as many of the eighteen stages of anonymous enemy aircraft as possible. Obviously the graphical detail has had to suffer a bit here, especially the landscape which are far less pretty here, but overall this is an enjoyable conversion of this classic, and even has semi-cheat feature enabling you to reach the later stages unscathed! 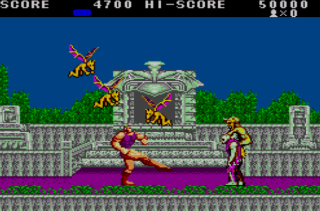 If my memory serves me correctly, I think it was actually my parents who suggested I add this one to the pile, maybe for a bit of variety. I hadn't previously heard of it but it looked interesting enough, and for a while I quite liked it. Before long I discovered it was far from the pinnacle of Master System gaming, but I guess it's not really a genre the MS is swamped in either, and it's not too bad. It does have one of the arcade version's stages missing (the third) and can be pretty frustrating, but how can it a bad thing to turn into a powerful human/monster hybrid? It's just a shame you don't get to spend more time in these forms, especially the first one - the fireball-throwing werewolf! Besides, I'll always have a soft spot for this game as I could actually complete it!


So, these were the games that kept me occupied for the first few months of my console-owning life, and great fun they were. They were of course gradually added to over the coming months with many titles now considered among the system's best, such as Fantasy Zone, Psycho Fox, Wonderboy 3, Power Strike, Shinobi, Spellcaster, etc, and my good friend Luke often brought his favourites to my house too. The Master System remains one of my most fondly remembered consoles despite the fact that it was soon superseded by the MegaDrive (another of my favourites) and I really can't recall any bad memories of this under-appreciated console which I still regularly enjoy now.