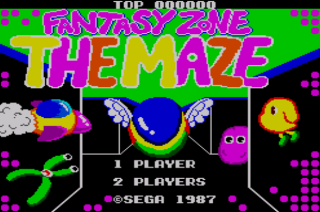 I don't know about you but the thinking behind some games is really confusing to me. After releasing ultra-cute shoot 'em up, Fantasy Zone, in 1985, even finding sufficient success with it to adopt its main character, Opa-Opa, as their mascot, Sega then released a similar but improved game in Fantasy Zone 2, also a psychedelic side-viewed shooting game. Both games were tough but proved very popular nonetheless and were converted to several consoles of the time. So after this success, and with the character and game series firmly in place, the logical next step would be Fantasy Zone 3, right? Actually, no. The next game in the series was Fantasy Zone The Maze, a curious combination of the first game and... Pac-Man?

Yes that's right, the third Fantasy Zone game is a maze-based collect-the-dots game! Or in this case collect-the-coins. It retains its links to the series from which it takes its name by virtue of the fact that player(s) control good old Opa-Opa (and Upa-Upa), and the backgrounds to each round are taken from the worlds that comprise the first Fantasy Zone game, i.e. Plaleaf, Tabas, La Dune, and all the rest. Each world features four rounds with different layouts - three standard and one bonus. Every navigable part of the standard rounds are filled with rows of coins of varying sizes (and different values accordingly) which can be used to buy various weapons and power-ups with which to outwit the many enemies found in each maze.

All the enemies emanate from a circular generator, usually found in the middle of the stage. Each time it 'charges' it releases a batch of aliens but you can reset the charger, thereby delaying their arrival, by passing over it. Obviously this diverts your attention from collecting the coins though, and this must be done to finish the round (plus the larger, more valuable ones shrink down to small ones if you leave them too long), so you will inevitably have to contend with aliens to some degree. Luckily these can be dealt with by purchasing the aforementioned power-ups which can be found scattered around each maze. Again, passing over them will buy them (if you can afford it!) with each lasting for a limited time. Before the start of each round you're given an inventory of which ones will be available and how much they will cost.

Predictably, most of the power-ups available here are taken from Fantasy Zone itself, such as big wings (speed-up), twin shot, laser, firebombs, etc, but the best one is all-new, though not very imaginatively-named - the 'Top Power', which turns the player's ship into am industructible fireball (for a short period)! Much like Fantasy Zone however, each time you buy a power-up, the more it will cost next time. Also, appearing in the respective corner of player one or two now and then is a smart bomb or extra life. Very handy, thank you! After each round you'll receive a bonus based on how fast you completed it, and after each third round (each world, in other words) you'll enter a nice bonus round. This takes the form of a simple maze filled with various bonuses. However, you'll only get a second to memorise its layout as the lights soon go out, leaving just a small area around your ship illuminated!

As you probably guessed, most of the aesthetics here are lifted straight from the first FZ game including the backgrounds, sprites (albeit miniturised in most cases), sound effects, and music (slightly remixed), but the gameplay is of course almost entirely different. It's an interesting, well-executed idea though, and fans of this kind of game will find plenty to enjoy here. There's 51 mazes altogether so it will last a long time, and while the game is pretty tough with just the one player (some of the smaller enemies move far faster than Opa-Opa), it was really made with two-players in mind I think. My good friend Luke and I have completed it many times over, for example, but no way could I do it on my own. To fans of the first two games, it was probably a big disappointment in all honestly, as they must've been expecting more or the same, not some obscure maze game, but if you (and a friend) take the time to judge The Maze purely on its own merits, you'll find a enjoyable and addictive collect 'em up which is fantastic fun, especially with two-players.