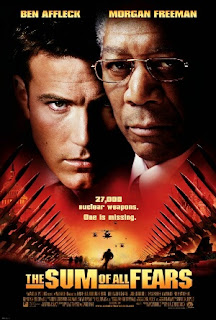 Terrorism thrillers have certainly been around for a long time now, since the debut of a certain James Bond at least, but a majority of them have always seemed to adhere to the same sort of template. This one is a bit different. It was adapted from the Tom Clancey novel of the same name and is part of the convoluted 'Jack Ryan' series that has a rather confusing timeline anyway, nevermind when you take the films into consideration, each of which has changed various details. We'll just concentrate on the films for now though which began with first The Hunt For Red October (with Alec Baldin as Ryan), then Patriot Games and Clear and Present Danger (both of which starred Harrison Ford in the main role). For this film the part was handed to Affleck and, unlike the novel, is set early in his CIA career when he was a mere analyst.

The film opens with a scene depicting an Israeli jet fighter being prepped for takeoff which, we're told via some accompanying text, was sent up with a nuclear bomb towards the end of the 1973 Yom Kippur War with a view to using it against the invading Egyptian and Syrian forces in the event their own ground forces were overrun. Before this did or didn't happen, however, the jet was shot down over the Syrian desert. Fast forward to the present day (2002) and the bomb has been discovered buried deep beneath the desert sand by local villagers who unwittingly sell it to an arms dealer for scrap, who in turn sells it to disaffected Austrian neo-Fascist, Dressler (Bates). Meanwhile, in the US, President Fowler (Cromwell), CIA Director Bill Cabot (Freeman), and some of their advisers are conducting 'war games' exercises to simulate a nuclear attack against the US.

Soon after this, the Russian President suddenly dies and is replaced by the younger and relatively unknown President Nemerov (Hinds). Unknown, that is, to everyone except Ryan who has studied him for years, even predicting him to be the next President. Ryan soon finds himself being invited to top-level meetings and even being sent to Russia to meet Nemerov whilst on a routine nuclear arms inspection. Soon after they arrive back home, Cabot sends operative, John Clark (Schreiber), to Russia to track down a trio of missing nuclear scientists - the exact three that would be needed to reactivate an old, recently acquired bomb, for example. Meanwhile, Russia launches a massive chemical weapons attack on Chechnya, apparently ordered by Nemerov, but Ryan doesn't believe he's responsible. Dressler then launches his own attacks against the US and tricks them into believing the Russians are responsible. Thanks to events in Chechnya they believe it, and events threaten to spiral out of control as the two countries head towards all-out nuclear war.

Tom Clancy commands a large and loyal fanbase and his books, as well as the films based on them, are always heavily scrutinised. This film proved more controversial than usual. Not only were many details changed from the book but the choice of Ben Affleck to play Jack Ryan caused considerable rancour among many. I'm no Clancy fanboy though, and neither do I have a problem with Affleck, so I'd like to think I can be impartial. Whilst he's unlikely to be nominated for any awards here, he does a perfectly passable job if you ask me, enjoying romantic evenings with his new girlfriend, Cathy (Moynahan), and engaging in casual banter with his colleagues before he's swiftly elevated to the upper echelons of the CIA and suddenly he's far more nervous and having to take things a lot more seriously.

He doesn't even have a huge amount of screentime either, none of the characters hog the limelight really. Morgan Freeman barely breaks a sweat as calm and confident CIA Director, William Cabot, but he remains as watchable as he always is. In fact, everyone in the film does a decent, if unspectacular job with their roles. I enjoyed Liev Schreiber's limited screen time as John Clark in particular, but the thing that makes the film for me is the superb, tense atmosphere it builds throughout. A particularly chilling moment occurs when the President is regaling guests at the Whitehouse Correspondence Dinner and all of a sudden everyone's pagers and mobile phones start beeping. First one, then two... before long dozens. At that moment you just know something big has gone down!

That's indicative of many tense moments in the film too. It evokes memories of the fear and paranoia surrounding the Cold War period, and even the Cuban Missile Crisis as well with the actual 'bad guys', the neo-Fascists (who were changed from the Middle Eastern terrorists of the book), not even spending much time in front of the camera themselves - they're just around long enough to stitch up Russia and provoke the US really. The Sum Of All Fears has certainly got its critics to say the least, especially Clancey fans (and indeed Clancy himself!) but as far as I'm concerned it's a film with a lot more balls than most of its type and is a well-paced, atmospheric (and rewatchable) thriller that should entertain everyone else immensely.