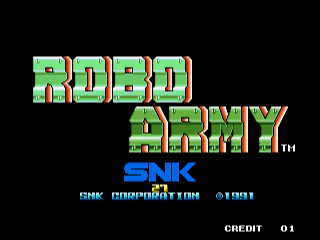 Ask most people what kind of game they associate with the mighty Neo Geo and most will undoubtedly say one-on-one fighting games. This is understandable since the machine is positively flooded by games of this type, and mostly good ones too, but what of scrolling fighting games? Well, unknown by me until recently, there is one that goes back just about as far as the Neo Geo itself does! The moment of revelation for me came at the recent R3Play Gaming Expo in Blackpool where my friend Rich and I discovered the only AES at the show was running a game of the type in question. So, I'd discovered its existence, but the fighting game pedigree of the host console gave it a lot to live up to. Is the system as adept at the scrolling variety of fighting games?

The first thing I noticed about Robo Army, which shouldn't have been surprising given its name, is that there's nary a Human in sight! Apparently a 'mad scientist' has decided to create an army of robots to destroy the city, capture all the citizens, and use their brains for more robots to take over the world. The fact that the only Human's in the game seem to be scantily-clad girlies in prison would seem to suggest he's been at least partially successful too. Eeek! All is not lost though, as you and a friend can help to save these girlies, and indeed the rest of mankind, by assuming control of a pair of cybernetic soldiers, Maxima and Captain Rocky, and punching the crap out of all the stupid robots that stand between you and the 'mad scientist'!

The distance in question spans six 'areas' and includes such locales as a jungle, city streets, a factory, and of course the main enemy stronghold. Populating all of these areas are robots of various kinds comprising the 'army' of the title. Some of them are mere drones but there are several special kinds too, including mid-bosses, and even some robotic birds and dogs and other animals. Progression to the next area is guarded by a robotic boss, often a larger version of one of the animal robots. The heroic soldiers have a few attack moves to see off the invading hordes though, including punches, reverse kicks and flying kicks, and they can pick up things to throw at their attackers such as barrels and even vehicles! They can use the limbs of defeated robots as clubs too, and there are also power-up icons to be found periodically. Most of these build up your 'special attack' power (which damages or destroys all on-screen enemies) but there's another which transforms you into an invincible armoured car for a short while!

Aside from the awful title screen (see above!), the presentation and graphics are pretty decent here for an early Neo Geo game. There are some cut-scenes between levels (which I'm afraid I can't follow as I have the Japanese version of the game!), the sprites are big and nicely drawn, and the backgrounds are packed with detail for the most part and feature nice use of colours. The only problem is the lack of variety. Despite being set in pretty diverse locations, most of the levels have a very similar feel to them. The only moment in the game where it seems like the designers are trying to mix it up a bit is the rope section where you must climb down the screen whilst attempting to see off the many foes at the same time. The same can be said for the sprites really. As you play through the six levels you will encounter new ones but a majority feature little variation besides their torso colour, although they do all explode satisfyingly when beaten!

I guess you could say that's the only major problem the game has - it's very repetitive. Control over your cyborg feels a bit clunky but it's pretty good for the most part and the music, whilst fairly average in itself, helps to keep things lively - the sound effects in particular are good, with lots of nice metallic clanging noises. None of this does much to diversify the gameplay though. Your cyborg soldiers are pretty limited as far as their repertoire of moves is concerned and considering the number of buttons available on Neo Geo systems, there's not much excuse really. If they at least had a decent selection of attacks it might help you to overlook the repetitive levels and enemies, but alas, there are few. Robo Army is great fun when played with a friend though, and I suspect it was designed with this in mind. With a few more coats of polish this could've been a cracker but as it stands it's merely average.