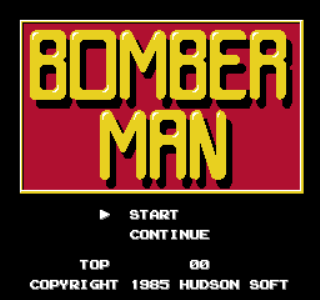 Until a few years ago, the Bomberman series began on the PC Engine for me, so I was surprised to discover that its origins actually go beyond that famous version to a multitude of older Japanese systems, many of them computers rather than the consoles the series would soon find a home on. It was released in the West, on the Speccy no less, and featured a curious main character called Eric who was an explorer looking to plunder treasure from caverns. The Japanese releases, however, featured the classic White Bomber we all know and love today, and the most widely available of these, to those gamers in the West at least, was the NES version. White Bomber himself is apparently a sentient robot who wants to be free of his job in an underground bomb factory. To do this, he must blast his way through fifty stages populated by a variety of enemies who, rather harshly, kill White Bomber with a single touch! 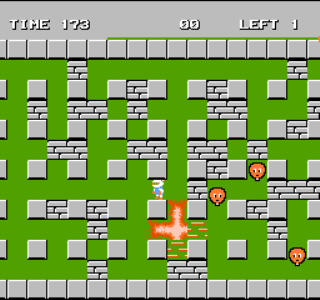 As you've probably guessed, the premise behind the game is the same as the Westernised game featuring Eric, and indeed most of the subsequent games in the series - that being, to eradicate all the enemies on the stage, then look for the hidden exit to move to the next. Both of these goals are achieved by deploying bombs. Their blast range is very limited to start with, and you can only lay one at a time, which makes ensnaring the enemies pretty tough. Luckily, hidden beneath occasion soft (i.e. destroyable) blocks are power-ups which will increase the range of your bombs and let you lay more than one at a time, as well as some others like speed-ups and remote-controlled bombs. This would actually make the game easier as you progress through it were it not for the ever increasing number of enemies and also the different types that appear as you advance through the levels. There are eight different types in total and they get faster and craftier all the time. Some seem to constantly run away from you, making it difficult to kill them, while others actively chase and harass you! 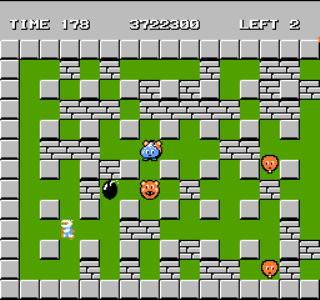 The first stage only features the most basic enemies which seem to be the 'Floaters' from the Speccy game I looked at recently, except here they're called 'Valcoms' which look like balloons and don't cause too many problems. As early as the second stage you'll encounter the next type of enemy, a blue water-drip type creature called 'O Neal'. The other enemy types (most of whom have equally obscure names) are apparently introduced one per level thereafter and include 'Dahl' which look like wobbly barrels, 'Ovapes' which look like Pac-Man ghosts and can move through soft blocks, the fast-moving muchers called 'Pass', and the pillow-like 'Doria' who certainly do more damage than any kind of soft furnishing I've encountered, and all must be destroyed before the time limit expires. If you allow that to happen you're in trouble for you'll then be inundated with hoardes of super-fast 'Pontans', which pretty much spells certain death! 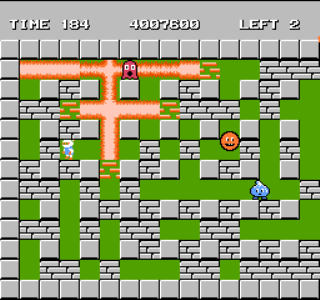 Eric and the Floaters was the genesis of the great and enduring Bomberman series, and it certainly introduced the basic game concept, but it was this NES release two years later which introduced many of the features that would soon become synonymous with the series for the next few decades, not least White Bomber himself. He looks a little different here, with his appearance being maginally altered over the years, but there's no mistaking his distinctive form. Some of the enemies found here would also return in many subsequent games and even the famous Bomberman music can be heard here for the first time, albeit in a slightly more primitive form. The basic stage layouts are also instantly familiar, with each being larger than a single screen and containing dozens of blocks in random layouts. This was a pretty early NES release, and a simple game in any case, so the graphics reflect that, but everything looks tidy enough and the use of colour is good. 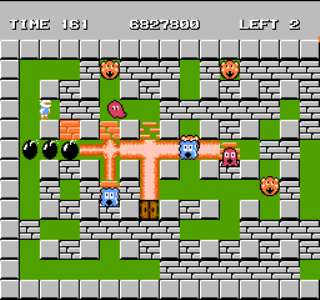 It seems strange talking about which elements of this game are familiar when it was the first one to feature many of them, but I, like many, didn't discover the series until later iterations, so it's fascinating to see when and where each first appeared, and this NES release certainly gave birth to many features that we now take for granted in any Bomberman game. However, at this stage Bomberman still lacked the one gameplay element that the series is arguably best known for in later years - a multi-player mode. After the somewhat limited, not to mention tough debut starring Eric, the classic gameplay of the series takes shape here, and it's great fun to play through. The fifty stages will certainly last you a good while, and each has a password (although it's a twenty-digit one, and if you make a mistake inputting it with the joypad you have to start again!) so you won't have to struggle thought the opening stages over and over, but the lack of a multi-player mode makes the game seem incomplete - for many gamers, playing Bomberman is only ever done with more than one player involved, and that would have to wait for the sequel...