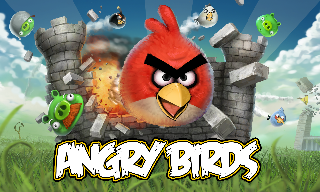 You know, the progress of mobile communication technology really has been remarkable. After many years of refusal to conform, I finally had to yield and buy my first mobile phone, and even to this day I'm only on my third phone. I had no intention of ever using any of them to play videogames and, were it not for a quirk of fate, I'd still be using my second phone and continuing to not play games on it! Through much of this time, however, I had been watching, with a certain degree of envy, admittedly, the evolution of the iPhone as a legitimate gaming platform, yet no single game tempted me enough to take the plunge. Until this one.

Actually that's not true. I still don't own an iPhone, despite trying to get one almost purely to play this. I knew from the first moment I saw a shot of this that I wanted to play it, so I found it frustrating that I was apparently unable to. Then, with the aforementioned quirk of fate, my phone was broken. Since it was too old to be fixed or replaced, I was instead given a state-of-the-art (for about five minutes) Android phone for which I found out Angry Birds was due for release. Hooray! Even better, when I was finally able to download it, it was free! This in itself made me very happy, but after all this waiting, was the game actually any good, or had I built it up so much for myself that I was in for a disappointment?

Like most puzzle games, the concept behind Angry Birds is a simple one which doesn't really need a detailed backstory. Suffice to say, some evil (and for some reason, green) pigs have stolen the eggs belonging to a group of birds. This has understandably made the birds angry who have decided to channel their anger into a direct assault on the pigs who have barricaded themselves in and around various strongholds. It is then your job to launch the birds at the pigs using a large slingshot with the eventual aim of defeating them and reclaiming the treasured eggs. This is achieved either by direct contact, or by causing nearby structures to collapse onto them. Those pesky pigs have built some elaborate defenses though, so it won't be easy!

According to the walkthough on the Rovio website, the game consists of five 'themes' each comprising of twenty-one levels, but there have been other sets of levels made available to download so the exact number is hard to say, but it's a lot! Each one features a pig, or pigs, on the right of the level and your slingshot and quota of birds on the left, and there's usually various obstacles between the two. The structures the pigs are usually protected by are made of glass, wood, or stone, each of which is obviously progressively harder to break through, and are more often than not made of strategic combinations of several materials. To break down/through these structures you have six different types of bird at your disposal.

The first bird you'll use is the red one which is a tough sonuvvabitch but doesn't really do much beyond collide with whatever you fire it at. Next up is the smaller blue bird which will split into three separate birds in mid-air when you touch the screen. After this helpful fellow you'll encounter the yellow, and possibly angriest of all the birds. A tap of the screen while he's in flight will see him increase in speed and plummet kamikaze-style in a straight line, causing greater damage. Next is the heavy black bird who self-destructs in a powerful explosion after he makes contact with any structure. Soon after him you'll meet the white bird who, with a tap of the screen, will drop an egg bomb. Last but not least is the green bird who can reverse his course in mid-air. Each level gives you a pre-set quota of these birds that you can use to defeat all the pigs on that level, and careful planning is needed to make best use of their abilities.

The pigs have a few tricks up their sleeves too though. The smaller ones barely need a touch to be defeated, but the larger ones are tougher, some of whom are equipped with helmets and armour! Some are so tough you'll need help to best them. There are often strategically positioned rocks or other objects, for example, which, with a well-placed bird strike, can fall and cause an extensive chain-reaction of destruction. Some levels even have carefully placed boxes of TNT which can be ignited with the strike of either a bird or object of any other kind. The pigs don't seem to care though, and sit there looking at you, blinking, sometimes grunting, and laughing when your attempts to reach them fail! Completed levels will give you a Star Rating out of three depending on your points, which can be earned for destruction of structures as well as a 10,000 point bonus for any unused birds.

The first thing I noticed about Angry Birds is how slickly presented everything is. You can breeze through all the menu screens and suchlike in a flash, which might not sound like much but it really is a breath of fresh air, with many games these days, mobile or otherwise, having clumsy interfaces and long loading times. Here, if you fluff up a level, two touches of the screen and a similar number of seconds later and you'll have restarted it! The visual style used here appeals to me a great deal too. Whilst obviously far from the pinnacle of modern technology, it suits the game perfectly and is very easy on the eye. There's even some amusing cut-scenes! Whilst there's no in-game music, the sound is also of a decent quality, with many amusing sound effects befitting the style of the game, and several catchy tunes and ditties on the various screens between levels. All the flashy front-ends in the world can't disguise a sucky game, but luckily Angry Birds is anything but that.

The best games on a platform as limited as a mobile phone are ones creatively programmed to make the best use of its unique features, and it's here that Angry Birds excels. The game was created originally for the iPhone but, since Android devices use near-enough identical technology, it works just as well here. The touch-screen controls are simple and precise and I don't think it's possible for the game to work any better. The physics are spot-on too, with partial destruction of some structures leaving the remains teetering and swaying, sometimes taking thirty seconds or more to finally collapse. This is one of those games that you can play for five minutes but often end up playing for hours on end, constantly adjusting your birds trajectory until you get exactly the shot (and ensuing destruction) you want! Even if you manage to finish all the levels on offer, there's still the challenge of achieving a three star rating for each of them. Angry Birds is such a simple concept but it's supremely playable and unbelievably addictive. I guess I'm a bit of a sucker for these silly games - I was exactly the same with LocoRoco for the PSP - but everyone should at least give this one a try. Android owners don't even need to pay for the privilege. Ready. Aim. Fire!