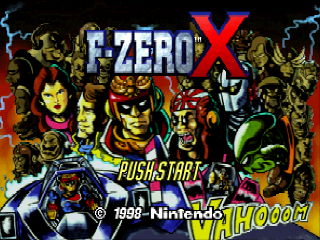 Despite being a highly accomplished racing game, the original F-Zero was perhaps most highly regarded for its admittedly impressive technical prowess. When news of a full sequel (F-Zero 2 was more like a 'data-disk') on Nintendo's brand spanking new 64-bit powerhouse emerged, mouths began to salivate at the prospect of what wonders might befall gamers. However, when it finally arrived it wasn't as instantly mind-blowing as many gamers were expecting. After the bar-raising the original did, a similar advancement was expected here, but the graphical detail was actually notably inferior to most of the other N64 games that had been doing the rounds, nevermind markedly better. This was apparently done on purpose by Nintendo so they could achieve a constant silky-smooth frame-rate of sixty frames per second. Their decision wasn't met with much enthusiasm at first though. Was it worth the risk?

Questionable graphical detail notwithstanding, if there's one thing that F-Zero X is, it's bigger. Bigger and better than F-Zero in pretty much every area. The objective remains the same - to win races - but the courses over which this is done really are something else. One of the few criticisms levelled at the SNES game was that the courses were all completely flat. That situation has been rectified here and then some - I'm pretty sure there's not a single flat course to be found in F-Zero X! They are all suspended high above the surface of their respective planets and their features range from gently twisting roads with slopes and the usual chicanes and hairpins to full-on roller coaster-style courses full of downhill plummets, uphill climbs, huge banked corners, corkscrews, massive ramps, loops, tunnels and everything inbetween!

The single player game modes available here include Grand Prix, Practise, Time Trial, and Death Race, and a majority of your time will most likely be spent on the first of these (in single-player, at least). Grand Prix's are contested by thirty racers, each with their own distinctive 'machine', over one of the leagues. There are initially three available - the Jack, Queen, and King Cups, with each of them consisting of six courses. Points are awarded after each race based on your finishing position, from first down to thirteenth, and successfully winning the three initial leagues will open another one, the Joker Cup, which has six more courses. There is also a fifth and final league - The X Cup - but unlocking this takes a bit more work. It's worth it though as it's a test for even the most talented of racers as its courses are randomly generated each time you race so there's no opportunity to learn them first!

The Practise and Time Trial modes are self-explanatory, although it's worth mentioning that the latter lets you race against staff ghosts. This way you can see if you're better at any given course than the people who actually designed it (and I'm sure a few obsessed individuals have devoted a lot of time to this pursuit)! The Death Race takes place on a basic course and sees the aggression level of each of the thirty racers cranked up a notch! Using your machine's meagre attack moves (it can charge to the left, right, or perform a spin), the object is to take out as many opponents as you can while they all try to do the same to you (and each other). Another criticism the original game received was its lack of a multi-player mode. This is another area in which F-Zero X bests its forebear thanks to its fantastic Vs Battle mode where between two and four racers can compete at once.

One of the first things you'll notice about F-Zero X is that it's fast. Very fast. The Dash Plates make a welcome return here, as does the Super-Jet (or 'Boost Power' as it's now called) and, unlike F-Zero where you only got one boost per lap, you can now use them as often as you want after you've completed your first lap. Each time you use it drains your machine's energy though, so keep a plentiful supply of this by visiting the pit areas regularly. It seems that the various pilots have modified their machines since the last game too. They are faster anyway but you also now have the option of changing your engine settings by altering its top speed / acceleration ratio too. This combined with frequent use of the Dash Plates and your Boost Power, especially in conjunction with one another, can see your speed reach quite staggering levels, even hitting four figures on occasion (my current speed record is 1,527kph!).

There's quite a lot to F-Zero X for an arcade-style racer but it would all be for nothing if the widely-criticised graphics kept gamers away. Personally though, I can't see what all fuss is about! I asked earlier if Nintendo's decision to sacrifice graphical detail for increased smoothness and speed was worth the risk. Well, in my opinion it was an excellent decision. The backgrounds may well be somewhat sparse but they are colourful and varied but that's not hugely relevant anyway - the on-track action is so eye-meltingly fast, you'll barely even get a chance to look at the backgrounds unless you come off the track and plunge into them! That said, it is impressive to see the horizon rolling around as the track meaders all over the place, or to be staring straight at the ground as you plummet down a collossal ramp (see the Fire Field screenshot!).

In addition to being really fast, each race is chock-full of action. The N64 throws the thirty racers, each in their own distinctive machines, constantly jostling for position, around the courses with apparent ease. A mere six of them are available to use at the start of the game (including those from the first game) but winning the various leagues gradually unlocks the remainder, each of which has differing grip, boost power, and body strength. They all look really nice too (plus you can change their colours!) and you can quickly build up genuine rivalries with many of their pilots, some of whom are more agressive than others. The game has a fantastic atmosphere which is helped considerably by the awesome rock soundtrack, featuring wailing guitars and thundering drums, and the courses that share names (but little else) with those in the SNES game are also graced with superb remixes (yes, including Big Blue!). It's those courses though, that keep you coming back to the game.

Any game featuring jet-powered hovercars racing over tracks in mid-air is likely to feature lavishly-designed courses, and the opportunity here enabled the designers to really go to town! To this day, F-Zero X still features the best-designed courses I've ever raced on. Each of them is distinctive and memorable, and they really are thrilling to race on, something helped by the extremely precise controls afforded by the N64's splendid analogue controller. Everything is so smooth and zooming along, weaving in and out of the other racers with pixel-perfect accuracy is exciting and great fun. There are also four difficultly levels and, thanks to the X Cup, you'll never run out of new courses to race on! The game builds up a fantastic sense of competition too, but there's not really any one thing that makes this such a great game - it's just a perfect blend of everything. Still probably the greatest racing game I've ever played.