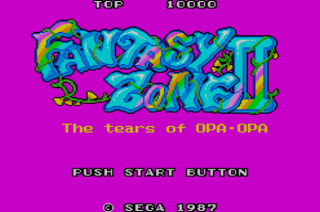 Sega pretty much invented the quickly-dubbed 'cute em up' sub-genre with Fantasy Zone and it was an interesting fusion of gaming styles. The bright, colourful graphics full of funny-looking creatures and cute characters belied the tough shooting action the game provided, but it proved to be very popular and was converted to several platforms of the time. Set ten years later, this inevitable sequel tells pretty much the same story as the first game - the now-expanded territory of the Fantasy Zone has come under renewed attack from the evil Menon Empire who are once again attempting to construct a huge fortress in the Fantasy Zone. He's getting on a bit now but Opa-Opa still springs into action to save the day!

Fantasy Zone 2 The Tears of Opa-Opa, to give it its full title, initially appears to be more of the same from Sega, and there is in fact little difference between this and the first game beyond the cosmetic, but that's certainly no cause for complaint when the first game was so good! There are again eight stages and each but the last is a free-scrolling, looped stage featuring a constant stream of small enemies, usually moving in formation or patterns, whose sole job it is to prevent you from destroying the larger, enemy-spawning Menon 'bases' on each stage, of which there are substantially more this time. Eliminating them all will lead to a boss fight before progressing to the next round.

The biggest difference between this and the first Fantasy Zone game is that each round is now divided into several different areas. Destroying enemies still releases coins (and notes now, too) of varying value but some Menon bases leave behind a blue warp instead. These allow you to travel back and forth between the areas, each of which generally contains four or five bases. There is also one base that will leave behind a red warp when destroyed. This leads to the boss but you can't enter it until all the bases are destroyed. Opa-Opa's basic armaments remain his weak but rapid-fire twin shot, and slow-firing but more powerful bombs. Fortunately there is again a shop to help him out which this time stays put once it appears rather than floating around for just a few seconds as before. Most of the old engine and weapon upgrades return, such as the jet engine, wide beam, laser, seven way shot, and twin bombs (which are much more useful this time) and there's a few new ones too like the big shot, three way shot, and twin big bombs. As before, the speed-ups and twin bombs will last for the remainder of that life but the other shot and bomb upgrades are time or shot-limited.

The eight rounds are all set on new planets and as such there are many glorious new wonders to behold here, and that's perhaps one of the biggest draws of Fantasy Zone 2. Not only does each round have its own background, but most of the areas within each round do too, and they are mostly superb! As well as being unique (and very colourful, as you might imagine!), they are much more diverse than in the first game and feature particularly impressive ice and fire stages. Each stage is also home to unique enemies who are varied and superbly detailed for the most part. There is a little slow-down when things are at their busiest, but this remains one of the prettiest, most vibrant games available for the Master System.

Anyone who's played Fantasy Zone will know exactly what to expect here. Sega has tinkered with the premise very little for the sequel and, aside from the new graphics, sound, and level structure, this is essentially the same again but even better. It remains a pretty tricky game, with some smaller enemies moving very quickly and occasionally seeming to appear from nowhere, but it's not unfairly difficult and playing though it is great fun. As well as taking you to new areas, the warps are extremely helpful for escaping from oncoming hordes of enemies, and thanks to the easier access to the shop, it's now possible to buy weapon upgrades and save them for the bosses, so you could say the going is a little easier here. In fact, the only thing here that's worse than the first game is the music which is still pretty good but not as memorable as the first game. Overall, this is a fantastic sequel that retains all the charm of the first game and adds more of its own.