The many and varied alien races of the Star Control universe are one of the most appealing things about the series, but which side is best? We had a good look at the Alliance fleet here in the last post in this series, and it's reassuring to know that the 'good guys' have a few handy ships at their disposal, but everyone likes to play out the part of the 'bad guys' now and then, especially these days, so now I'll take a look at the ships used by the mighty Ur-Quan Hierarchy, beginning with the series antagonists themselves. 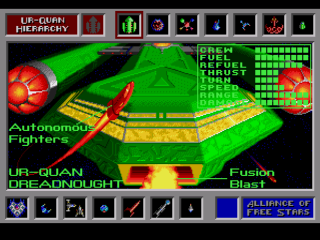 The bright green Dreadnought is generally considered THE ship of the game, featuring on all promotional artwork, etc, but is it worthy of such notoriety? It certainly has an imposing air about it, that's for sure! Its speed and maneuverability is only average but its Fusion Blast weapon is the most powerful in the game, along with the Broodhome's Photon Shard and a close-range strike by the Podship's Plasmoid, but it can fire much more rapidly than either of those ships. If you stray too close to a fully-fueled Dreadnought, no matter what ship you're using, you're history - in the right hands, it can take out a Broodhome in five seconds, nevermind the smaller, weaker ships! On top of that, it also has the ability to launch Autonomous Fighters too. Each fighter launched uses one crew member from the Dreadnought's roster and they are launched in two's. They home in on an enemy vessel, regardless of range, and attack it with short-range homing lasers for a short while before returning to their mothership to refuel. They can be destroyed but they're extremely small so it takes a crack-shot (or an opponent with an Earthling Cruiser) to do it. The mighty Dreadnought is a little large and lumbering but even an amateur can do considerable damage with one. In the right hands it's devastating. 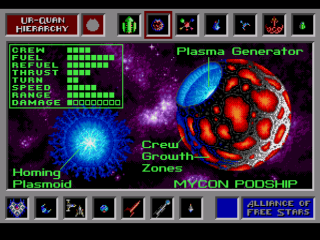 Talking of large and lumbering, here's another one that falls into that category. The spherical Podship is a strange vessel, although considering how strange the Mycon themselves are, I guess it shouldn't be surprising. Like the Dreadnought, it's a pretty slow and cumbersome ship, but this one fires a Homing Plasmoid, which is a large, glowing ball of plasma which fades in power the further away it gets, which can be a long way as this is one of the longest range weapons in the game. Shooting them can also decrease their power but if you get hit by one at close-range, they do immense damage. The Podship is also able to regenerate lost crew, a few at a time. Doing this uses its entire supply of fuel, and each Plasmoid uses about half, so the tactics of most Podship pilots is to attack with as many Plasmoids as possible without dying, then sitting as far away from their opponent as possible to gradually replace lost crew before attacking again. 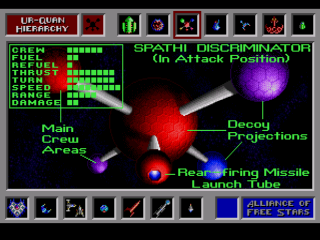 The Spathi are a cowardly bunch and their spindly yet heavily armoured ship is a reflection of their fearful ways. It's a pretty big vessel with a decent crew complement and is one of the fastest and most maneuverable ships in the game, but it's a real chore to try and win a battle with one, especially against any half-decent enemy. Its 'main' weapon, if you can call it that, is a front-mounted cannon that fires a few very weak projectiles at a time. It has an average range and the shots are so small it would take an age to defeat most ships with it. Far more useful, however, is its 'retreat weapon'. The B.U.T.T. (Backwards Utilising Tracking Torpedo) is a rear-firing homing missile that does a little more damage. More importantly, however, it can be fired whilst evading enemy fire (the Spathi's speciality!). Not my favourite ship. 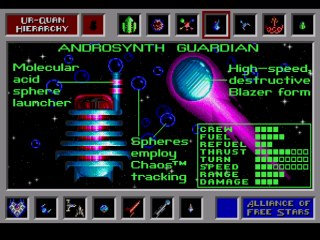 An odd one this, and not really in a good way! The Guardian is pretty average in all regards until you hit the fire button. Doing that unleashes a volley of.... bubbles? Yep, apparently the best main weapon the Human-like Androsynth could think up was Molecular Acid Spheres - bubbles basically - which home-in on an enemy using a slow and very erratic route. In other words, they just wibble and wobble all over the place and are easily avoided. Their only benefit really is that if you're using a ship with a short-range weapon, they make attacking the Guardian difficult. Its reprieve comes in the form of its ability to transform into its 'Blazer' form. Here it assumes the look, not to mention speed, of a comet and then becomes the weapon itself! It can repeatedly smash into opposing ships causing them damage for each touch whilst not sustaining any damage from the collision. It can, however, still be damaged by enemy fire and it's often very difficult to cause sufficient damage to an enemy without receiving any! A strange and not terribly useful ship in my experience. 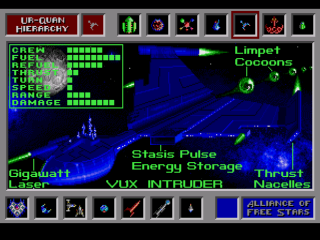 They were once potential members of the Alliance, the Vux, until they heard a Human calling them ugly. Enraged, they joined the Hierarchy purely to exact revenge on us! Eeek! Theirs is a very slow, lumbering ship though, possibly the worst in the game in that regard, but it has an ace in the hole. From its rear it can release pesky Limpet Cocoons which home in on an enemy vessel and attach themselves, depriving it of speed and maneuverability. The more that clamp onto its hull, the worst it will be until it's pretty much dead in space. From there, the Intruder can slowly approach until it's within firing range, then let rip with its immense but short-range Gigawatt Laser which will tear through any hull in seconds! Even if a Limpet-encrusted ship manages to defeat its Vux nemesis, the cocoons will remain on that ship for good. The only way to defeat an Intruder cleanly is to have a powerful ship with a long-range weapon, and be quick! 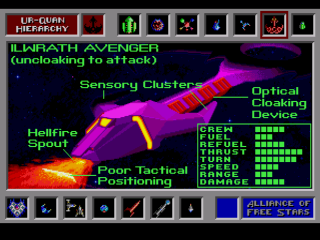 This fearsome-looking vessel is very enjoyable to use even though you'll rarely win a battle with one! It has one of the shortest-range weapons in the game in its Hellfire Spout which belches forth masses of damaging flames which will burn through any ship it can get close enough to! The Avenger, despite only having average speed, has a fast turning speed so it's pretty easy to direct its fiery spout at its enemy - it's just getting them in range that's the problem! Instead of outfitting their Avenger fleet with longer range weapons though, the Illwrath instead installed Optical Cloaking Devices in them. Whilst a great idea in theory, however, they only offer a slight advantage in practise. This is because, firstly, the ship blacks out the stars it flies in front of while cloaked so the eagle-eyed will still be able to see it, and secondly, the game zooms-in the closer together the two combatants get. Therefore, when fighting an Avenger-equipped enemy, simply wait until the game zooms in all the way, then let rip with all weapons until you hit it - chances are it still won't be close enough to use it own weapon! No one can deny that it's fun piloting a cloaked ship though. 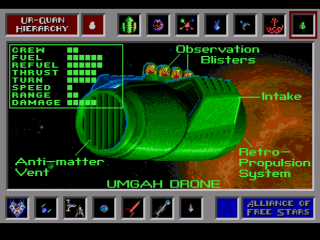 As we discovered in Star Control 2, the Umgah are a bunch of practical jokers at the best of times. I think whoever designed the Drone must've been playing the biggest joke yet! Not only is it very slow, but it beats even the Avenger to the title of the shortest-range weapon in the entire game too. Not a good combination! On the plus side, the Anti-Matter Cone it projects from its front (which is only about as large as the ship again) causes significant damage upon contact but considering the speed of the ship, you'll hardly ever be able to use it, and the ship can be destroyed by a single shot from larger ships. The Drone can also employ a Retro Propulsion System which sees it shoot backwards at high speed. This is intended to get it into position to use its weapon but it's tricky to do accurately and it can't travel very far either (not even the width of screen) as it uses the ship's fuel supply as it goes. It regains its fuel in one go too, rather than gradually, but it takes a while so you're often just waiting around. Its Anti-Matter Cone can absorb all but the strongest of enemy weapon-fire, but doing that just prolongs the agony of using this horrible little ship. Euurrghhh!

So, it seems that based on my analysis, the Alliance has the stronger fleet! Both sides obviously have good vessels and bad, but aside from the Dreadnought, the Hierarchy doesn't really have any 'easy win' ships if you ask me, whereas the Alliance has three in the Broodhome, Terminator, and Cruiser. Of course, the mighty Star Control 2, set after the Hierarchy had won the war (through strength of numbers?) mixes things up a lot by introducing numerous new races and losing a couple along the way for good measure (though not the Umgah, unfortunately), but things were more evenly matched for this original. Any fans agree with my Alliance and Hierarchy assessments?
Posted by RetroKingSimon at 17:25