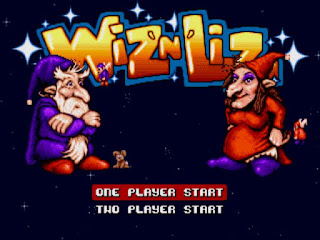 Released about mid-way through the MegaDrive's life, this quirky platformer for some reason seemed to slip under the radar for most gamers at the time. Is that because it sucks? Actually, no, and it was released on the most popular console and computer of the time, and came during a period when the genre was at its peak too, so it's a mystery to me why more people haven't played it! I actually first encountered it in a very favourable review in an Amiga magazine but it was the MegaDrive version I would ultimately purchase, purely because the MD is better than the Amiga as everyone knows (hee hee!), but the MD is also far better catered for as far as this kind of game is concerned too. So how did Wiz 'n' Liz fare against the likes of Sonic? Not too well, one might think, but could Psygnosis have a surprise in store?

One of the first things you might notice when playing this game is that it's nearly as fast as Sonic! It's set on the amusingly-named planet of 'Pum' where Wiz the wizard and Liz the witch currently reside. Their pastime of creating new (and peculiar) magic spells is second only to taking care of their many, many beloved pet rabbits. However, unfortunately their latest spell has gone wrong and whisked all their rabbits off to who knows where! Under your (and a friend's) control, Wiz 'n' Liz immediately set out to rescue them all and restore Pum to its former glory. Finding all of their rabbits isn't particularly hard as they've been liberally sprinkled across the many charming and not so charming lands that comprise Pum. They're not just normal rabbits though, but magic rabbits, and every last one of them must be rescued.

The game begins in Home Land where Wiz 'n' Liz's house and magic cauldron are located. There are also some trees here in which magic fruit grow. Mixing any two of these fruits in the cauldron creates a spell whose effect depends on which combination of fruits are mixed, but the first spell creates a door which provides access to the level select area. From here you can enter the various levels (or 'lands') and you can tackle them in any order you want. Each land is made up of two or three rounds, and on each of these there is a set quota of rabbits to rescue. This, unsurprisingly, is done simply by touching them. To start with, all rescued rabbits will each release letters which slowly float up the screen and collecting these letters spells out the magic word at the top of the screen. Once it's complete, rescued rabbits will instead release magic fruits, stars, and clocks.

Collecting these sparkly items isn't mandatory but it can be very useful. Gathering magic fruits will fill the magic-meter which, when full, makes that fruit available to mix magic spells with in Home Land. Each clock collected will add five seconds to you timer for the next stage / land, and stars can be spent on fruits, more clocks, and even extra lives in the shop, but only once you've worked out the magic spell to summon it! There are eight standard lands to play through (as well as one secret final land which you must earn the right to play) and they are all multi-tiered and based on some pretty standard themes such as Grass Land, Snow Land, Desert Land, Dead Land, etc. Each is also looped and the stages contained therein are timed, with the amount of time you start with being determined by which of the three skill settings you choose before play.

One of the most notable things about Wiz 'n' Liz is that it's nearly bereft of enemies, with only a few bosses making up their ranks. As well as the skill settings, there are also three 'levels' to choose between - Apprentice, Wizard, or Sorcerer - and each time you finish one of them you'll face a boss, such as a giant malevolent tree or sunflower, before progressing to the next level. The boss you face will be determined not only by the level but also the skill setting, so there's a good few of them, and that's one of my favourite things about this game - the range of difficulty settings mean it's possible to just mess around having fun and trying out new magic spells, or to really test yourself and try to finish the game properly too! There is also an even more superbly frantic two-player mode in with the players race each other to see who can collect their rabbit-quota first.

Despite taking this long to explain, Wiz 'n' Liz really is a fairly simple, albeit slightly strange game! Aesthetically, things are certainly superb. The opening title sequence features some lovely wibbly reflective water effects, for example, and the in-game graphics are nicely detailed, superbly animated, amusing, and full of character. The audio on offer here is of a similarly high standard. The sound effects are superb and there are lots of tunes, including one for each land. They are still among the best I've heard on the MegaDrive and must surely rank highly on the list of the composer, the great Matt Furniss' achievements, perfectly suiting the fast, frantic, arcade-style gameplay. In fact, on a good few occasions I've decided to play this game just to give my ears a treat before zooming through the delightful lands, getting caught up in the addictive rabbit-rescuing antics once again!

That's the best thing about Wiz 'n' Liz's game - you can play it for five minutes or two hours, it's great fun either way. The tomfoolery with the magic spells adds some variety but, whilst good fun, most of the fruit combinations produce little of substance - mostly amusing mini-games, bonus time/points, or a minor change to an aspect of the game (rabbit colour, for example). That's one thing that puzzles me about this game - being a platform game, it's not completely original, but it has so many unique features and charming touches and is so much fun to play, its lack of success is bewildering. Not only that but it was released at a time when 2D platform games were king and originality was scarce which only confuses matters further. It's hard to believe that it's only the second game from the developer that would go on to become the revered Bizarre Creations (responsible for Project Gotham Racing and Geometry Wars amongst others). Wiz 'n' Liz is a a fantastic game that I would urge any platform fan to try. Besides, how could you not like a game featuring rotating fruits with faces?

Gameplay Video: Check out the wonderful graphics, music, and frantic gameplay in this video (not made by me) :)