Though popular since the 70's, it was the late 80's and early 90's when gaming, particularly on consoles, really hit its stride, and like today there were a few genres that dominated release schedules. Among the most popular were shoot 'em ups but even more popular than these were of course platform games, and few if any consoles saw more examples of this genre than the MegaDrive. Most of them were average, some were horrifyingly bad, but there were still plenty of top-quality ones, and they took up a significant portion of my MegaDrive game-time. I've owned and enjoyed dozens of them over the years so picking the best five is no easy task. To make it a little easier I decided to not to include any of the MD's fantastic arcade conversions such as New Zealand Story, Rainbow Islands, etc, and the (at the time) splendid Sonic series only gets one nomination here too. Naturally, run 'n' gunners (Shinobi series, Ghouls 'n' Ghosts, Gunstar Heroes, etc) aren't included either, and nor are arcade adventures such as Flashback, Puggsy, etc. These categories are all good enough and numerous enough to receive their own Top Fives at some point. So, with all that in mind, here is my five favourite Mega Drive platformers.

If I review any MD platformers in my upcoming feature that get really high scores, they don't appear in this Top Five because I hadn't played them before! (a.k.a covering my arse!) 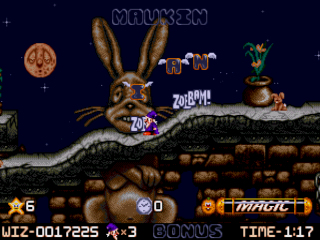 I'm starting to wonder if I'm the only fan this poor old game has! I'm not usually a fan of fast 'n' frantic, against-the-clock type games, but Wiz 'n' Liz is so happy and cheerful (not to mention addictive), I can't help but love it anyway! The object is simple enough - one or two players must race through each of the themed worlds rescuing the many rabbits that populate each whilst also collecting magic fruits and other items with which to create spells and prolong your game. It definitely seems to be a 'hidden gem' in the MD's back catalogue but I don't really know why. Maybe it's the lack of violence and destruction but for me this has always been a top game - nice graphics, fantastic music, addictive gameplay, and even a few original ideas, equals a winning formula in my book. 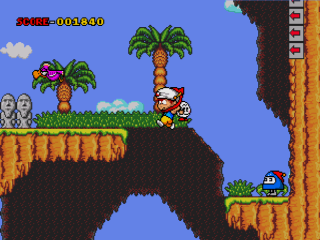 I've mentioned this great game before, and I'll do a full review at some point, but for now be assured that it's awesome! Most Western gamers will know it by the new name and identity given to it for its European and US release (Decapattack) but I much prefer this Japanese original which is perhaps more famous for its amusing name than anything else! It will be instantly familiar to fans of Psycho Fox on the Master System as they share many qualities, but this is no sequel or tarted-up port. It's a pretty large game with some stages featuring multiple routes through them and there are many quirky features present in its stages. Magical Hat is a real charmer which constantly entices you to explore its strange world. If you've never played it, or even if you're veteran of Decapattack, do yourself a favour and give it a try. 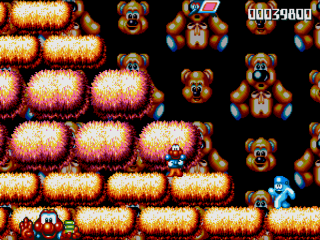 Games don't come much more nonsensical than this one! The original James Pond was an original and entertaining romp but this sequel cranked everything up a notch and is now a full platform game too, thanks to the special suit that allows James to remain on land. The game takes place across many themed stages populated by some very strange enemies and seemingly random collectible items but, perhaps aside from its strangeness, it doesn't really do anything that countless other games haven't done before - it just does it better than most games! The graphics and sound are among the MegaDrive's best and the many stages are packed with features and secrets. This is probably the most slick and polished of all MD platformers, and certainly the craziest non-Japanese one! 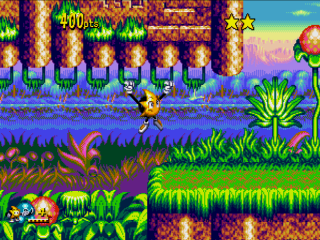 Good old Sonic Team. Not only did they regale us with the wonders of their Sonic games, but they also found time to sneak in this gem late in the MD's life. It actually started out as the game that would become Sonic before being resurrected with Ristar in command, and the first stage does feature similar graphics, but the gameplay differs quite a bit. The pace is a lot slower for one thing. Ristar clambers around the gorgeous stages using his arms as much as his legs. He can climb up walls, across ceilings, and around trees and logs, and it is by experimenting with these abilities that you'll be able to fully explore his world. The more sedate pace really suits the game and the character, as does the laid back soundtrack, and gives you the opportunity to appreciate the lush graphics! Many gamers missed this, what with the Saturn and PlayStation being unveiled, but if you were one of the ones who did notice it, you'll not need me to tell you how good it is! 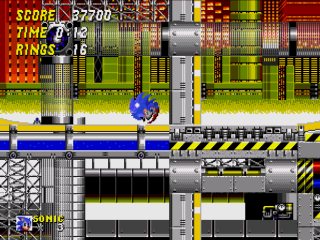 Sorry but it had to be really, didn't it? No other game got MegaDrive gamers whipped up into a frenzy like this one, nevermind any other platform games. Sega's motives for creating Sonic may not have been the best but at least they made a great game for him, so the sequel had a lot to live up to. To say it did would be one of gaming's biggest ever understatements! Sonic 2 features bigger stages and more of them, a tougher challenge, and perhaps the nicest graphics and sound the console has ever produced. I'm sure everyone who owned an MD had this game so I don't even need to extol its virtues really. Suffice to say, everything here is so much flashier than the first game it's almost as if they're running on different consoles, and the gameplay so finely-honed that, sadly, no further games in the Sonic series would ever better it.


As mentioned, the MegaDrive was swamped in platform games, so picking the best five was tough, mainly because I had to leave out some other great games. So, honourable mentions also go to: Castle of Illusion, Rolo to the Rescue, Kid Chameleon, Flicky, Quackshot, Aladdin, Pitfall: The Mayan Adventure, goodness knows how many others...
Posted by RetroKingSimon at 17:16