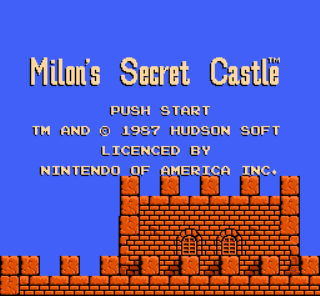 Poor old Hudson Soft. They've long been one of my favourite developers, particularly on the PC Engine (a console they helped to develop, no less) but earlier this year they were 'absorbed' into Konami and effectively no longer exist. Boo hoo! Fortunately, there are still a few of their games that have escaped my attention and one of them is Milon's Secret Castle, a scrolling platform game set in and around the structure of the title, known as Castle Garland. This vast fortress is located in the land of Hudson (chortle) where residents use music to communicate with each other, except Milon who apparently lacks this ability. Whilst trudging through the countryside in search of others like him, he decides to visit Queen Eliza, but instead finds the castle being attacked by 'Evil Warlord Maharito' who has imprisoned the queen, stolen everyone's musical instruments, and captured the seven Magic Crystal Balls. Milon quickly volunteers to stand against Maharito and restore the happy world of Hudson to its former glory, but it won't be easy... 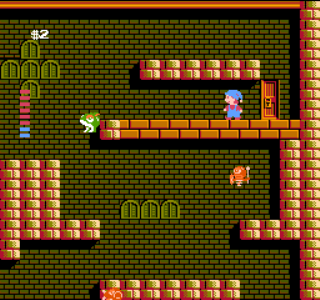 This is achieved by working his way through the four-story castle, room by room, from the ground up. There are ten stages over the four floors, plus you'll also need to tackle the well and the two towers that stand either side of the castle. The stages generally consist of roughly square rooms littered with platforms at various heights and numerous evil minions of Maharito which do their best to wear down his energy meter. Milon has a decent jumping ability to hop around the former and a helpful wizard named Barnaby bestowed upon him the ability to deal with the latter. To this end, Milon can shoot bubbles which see off the monsters... but only temporarily. They can only be fired one at a time too, and have a limited range, but you can angle your shots up or down. Just as usefully, not only can they take out enemies but they also perform an equally important function - revealing items hidden amongst the 'soft blocks', some of which make up the walls and floors of the stages. 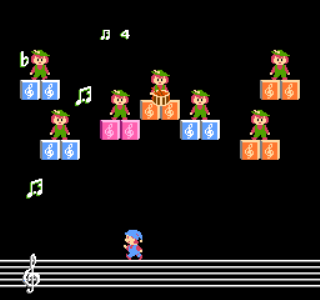 Shooting enemies will sometimes leave behind a small heart which restores some of Milon's health, but the hidden blocks contain many other things including money, umbrellas (allow you to shoot rapid fire bubbles), keys (to unlock stage exits), boxing glove (shrinks Milon if he also has a medicine), honeycomb (extends his life meter), musical notes (take you to a bonus stage), and a shop where you can spend your money. From here you can read a number of (hopefully) helpful hints as well as buy lots of useful equipment, much of which you have little choice but to buy at some point as it's necessary to make progress. There are almost twenty items in total - many perform usual platform game tricks such as increasing the range/power of your shot or increasing your jumping ability while others perform specific jobs such as the lantern you need to find your way in the castle's well, a vest which provides (partial) protection from fiery bits, and even a crystal that allows you to continue your otherwise-uncontinueable game (did I just invent a word?). 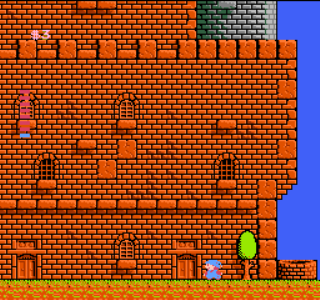 What all this basically means is, each room (i.e. stage) features only platforms and enemies. Everything else is initially hidden including the exit door and the key needed to open it. Each floor of the castle is also home to a large boss creature which must be defeated before you can move up to the next floor, but apart from these ruffians Milon's quest is very much of a puzzley-explorey nature, albeit one involving lots of jumping and shooting too. The stages do get quite a bit more complicated as you might expect, and it soon becomes quite a lengthy and arduous quest, but it shouldn't take too long to tackle once you've played the game through a few times, gotten some practise, and learned the locations of all the hidden stuff. That said, there's so much of it that it's likely you'll still be finding new things time and time again. Unless you cheat and use maps of course! Play the game properly though, and that first time will take a lot of effort for most players. Milon only has one life and no continues (unless you find the crystal), for example, and thanks to the infernal regenerating enemies his energy often doesn't last very long at all. 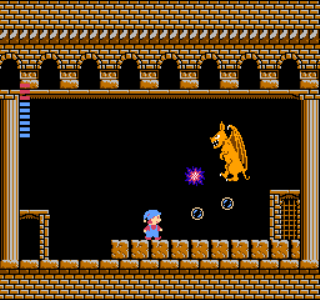 This is made worse by the fact that there's no brief period of invulnerability after you take damage like most games so it's more than possible to sustain multiple hits in quick succession. Your energy isn't refilled after a boss fight either; you don't even start the game with a full meter for Heaven's sake! That said, one advantage of the infinite enemies is that they sometimes drop hearts as mentioned. That and the fact that there's no time limit means it's sometimes possible to replenish your energy just by hanging around in a room shooting the idiotic enemies over and over again! There isn't any outside the castle but it's worth getting a move on there anyway - if you spend too long messing around, energy-sapping lightning starts falling from the sky, striking indiscriminately. Oddly, among the easier aspects of the game are the boss battles. Whether they take the form of a dragon, pterodactyl, or an obscure blob monster, they all follow the same movement pattern and attack in the same way so none of them should pose much in the way of headaches. 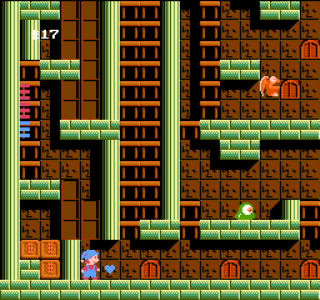 That reminds me of the biggest problem with the graphics here too - not too bad at all, but rather repetitive. I suppose it's to be expected since the game is set in a castle but there are at least a few different patterns for the backgrounds. Some more effort has been made to vary the foreground colours a little too, and the sprites are actually pretty decent, as is the catchy-but-loud music. The stages are a little more interesting than their rather samey appearance might suggest though - I believe each one introduces at least something new, whether that be a fearsome new enemy or a feature like the trick walls or whirly platforms that turn and drop you down when you stand on them. Importantly, control of Milon is flawless too - unusual for an early-ish NES game in my experience - and it's these things more than anything else that maintain interest in his adventure. Some of the puzzles are a little unfair and items hard to find, and some players will find it mighty tedious to repeatedly search rooms aimlessly, but if you like this kind of game you may relish the challenge! The high difficulty and somewhat vague item placement make Milon's game a flawed one for sure, but it's also one with a decent amount of charm and appeal too!