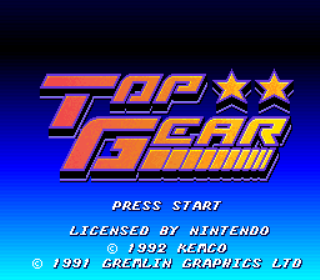 There were many reasons that gamers of the world were excited about the arrival of the SNES but one of the main ones was the ultra-hyped Mode 7 graphics trickery. We were told it would revolutionise 3D gaming, or at least games that appeared to be 3D thanks to the wizardry it would offer. The greatest benefactor of this was the driving/racing genre - titles such as F-Zero immediately showed what was possible, so it was very strange that it wasn't used by more developers. A great example of this is Top Gear, a seemingly new game exclusive to Nintendo's new machine, but one which had its roots firmly planted in the dark and gloomy world of systems bereft of Mode 7 splendour. Indeed, as the keen-eyed among you may have already spotted, Top Gear is a direct descendent of celebrated Amiga series, Lotus Turbo Challenge. This was probably not what expectant Nintendo fans had in mind prior to the system's launch.

On the upside, the Lotus series is pretty cool even if it doesn't have the benefit of Mode 7, but the back story to this 'reboot' doesn't inspire a great deal of confidence. The instruction book burbles a few lines about how this is "the race of your life" and some sort of "championship of the world" but first impressions are still rather good. There are several options screens which allow you to enter your name, choose between manual or auto gears, adjust the controller button layout, and choose from four cars - Cannibal, Sidewinder, Razor, and Weasel - each of which has differing top speed, acceleration, grip, and fuel consumption. After all these decisions have been made, it's on to the first race which takes place in the USA (Las Vegas, LA, San Francisco, New York). Subsequent races visit South America (Brazil, Peru, Mexico), Japan, Germany, Scandinavia, France, Italy, and the UK, but each has to be raced before the next is unlocked.

All eight countries feature four races apiece, each of which are contested by twenty racers of whom you must place in the top five to progress to the next race. Points are awarded based on your position and, if after the four races you place third or higher, you can move on to the next country. Although your car is equipped with three 'nitros' per race (Chase HQ-style speed boosts), progressing through the field is made more difficult by the fact that you always start at the back of the grid, even if you did well in the previous race - as is the object! Interestingly (or perhaps strangely), the game also pits you against a 'rival' which starts in second-to-last place. It's just a generic CPU-controlled car, much like the other eighteen in each race, but its progress is permanently displayed on the lower-half of the screen meaning a two-player-style split-screen display is permanently employed. I'm not sure if there's a point to this or if it was just done to save the graphics guy some work in filling the rest of the screen with pretty stuff during single-player races.

Aside from that possible act of laziness though, Top Gear's audio/visual aspects are pretty good. The presentation is great throughout with nice options and between-race screens, and the music is also spiffing. Most of the tunes are remixes from the Lotus games, themselves rather easy on the ears, and their return is welcome here, but I had a slightly more mixed reaction to the visuals. Everything is neat, tidy, and well-coloured, which is something I like a lot. The backgrounds are quite varied and often change from course to course as well as in each country. However, the track-sides are often quite bare except for the odd line of trees or signposts, and the cars all look very similar as well. That said, there are few games that feature so many cars in each race to begin with, regardless of how similar they are, and there are several road surfaces through the game and even night races (complete with an amusing and largely pointless 'headlights' effect).

The visuals may not have been what many SNES owners were expecting and they're not the only aspect of the game to remain loyal to its heritage, with Top Gear being little more than a tarted-up port of the Lotus games. They are good games though, so is it a bad thing? Well, there are 32 courses in all which is very impressive for a game of its age, and they are of varying lengths too, with the longer ones even requiring the use of a pit-lane to top up your fuel supplies (don't worry, your 'rival' uses it too!). The four selectable cars are basically difficulty levels, although there are also three 'skill' settings on the options screen anyway, but any combination still requires a lot of practise to progress far into the game. The earlier stages are of course easier (though not necessarily shorter), and all stages feature the same number of cars, but the computer controlled cars gradually improve as well as increasingly swerve around to prevent you passing!

This basically means you can't really make any mistakes as, although you're not restricted by a time-limit, you do have to finish in a good position to advance. Crashing into scenery or other cars certainly isn't as damaging here as in some games I could mention, but it's enough to keep you from the necessary positions. Good weaving skills are the main requirement for success but a lot of patience doesn't hurt either! That said, each country has a password which can be entered on the options screen to gain access to it, so even lesser skilled (or patient) players can see most of the courses available with a little code-hunting. It's worth persevering and progressing through the game legitimately though - it's well designed and enjoyable, control of the cars is surprisingly tight and responsive, and the music is mostly fantastic. Plus, it's always intriguing to see what the next city or country will look like! Some bigger differences between this and the Amiga games would have been beneficial - some fancier graphics, perhaps - but Top Gear is still one of the most entertaining driving games I've yet played on the SNES.