It's rare these days that a film barely anyone has heard of or knows anything about comes along and smacks us round the face, and one of the last I recall to have a really big impact was The Matrix. It received so little hype or build-up that I hadn't even heard of it prior to its cinema release. It got rave reviews though, of course, so I made it a point to buy it on DVD despite still knowing bugger all about it.

Watching it for the first time was definitely one of the more prominent of my "What the hell?!" movie moments but it was immediately clear that it was something special, both in terms of its story/premise as well as its floopy special effects. Numerous rewatches were both required and desired and it quickly became one of my favourite films which makes choosing its five most outstanding moments tough, but here are the one's I've selected: 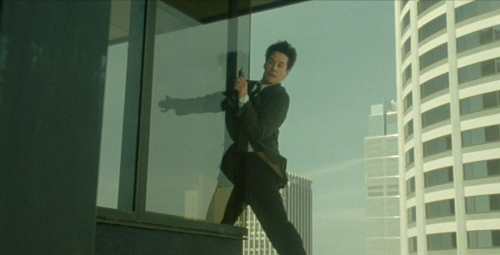 We'd already been introduced to 'Neo' by this point and caught a glimpse of his shady night life as a master hacker, but the next morning is when we meet Thomas Anderson, a 'program writer for a respectable software company' who doesn't seem to see eye-to-eye with his boss. Shortly after receiving a dressing-down for being late, he receives a package containing a mobile phone which immediately starts ringing. On the other end is the mysterious 'Morpheus' who is quick to alert Mr. Anderson to the arrival of the authorities who are looking to take him 'down town'. The solution is to escape, but even with the help of Morpheus, it won't be easy... 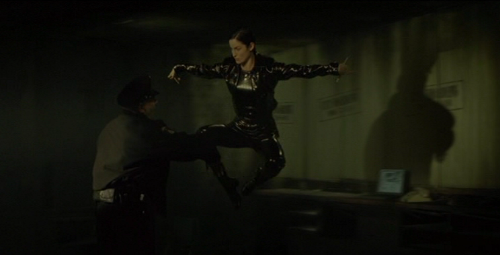 The first scene and one that's surely intended to make us immediately aware that this is no ordinary film! The mysterious PVC-clad girlie sitting at a computer in an otherwise empty room, cops storming the building, and an ominous warning from what we assume are the Feds outside. Then she starts breaking arms with single blows, floating, running up walls, and even flying through the air! A fantastic way to open the film which raises questions as well as eyebrows... 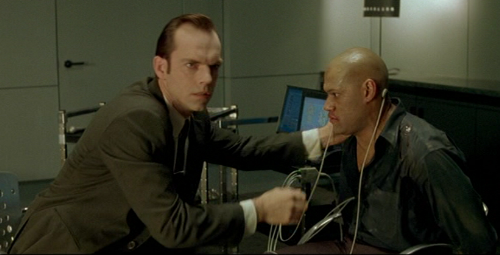 Despite being the villain of the film, Agent Smith, portrayed perfectly by Hugo Weaving, was arguably the most memorable character, and his interrogation of Morpheus shed much light on him including the abhorrence he so clearly feels towards us stupid humans which is summed up perfectly with the following observation - probably the best way I've ever heard our ridiculous race described too!

Agent Smith: "I'd like to share a revelation that I've had during my time here. It came to me when I tried to classify your species and I realized that you're not actually mammals. Every mammal on this planet instinctively develops a natural equilibrium with the surrounding environment but you humans do not. You move to an area and you multiply and multiply until every natural resource is consumed and the only way you can survive is to spread to another area. There is another organism on this planet that follows the same pattern. Do you know what it is? A virus. Human beings are a disease, a cancer of this planet. You're a plague and we are the cure." 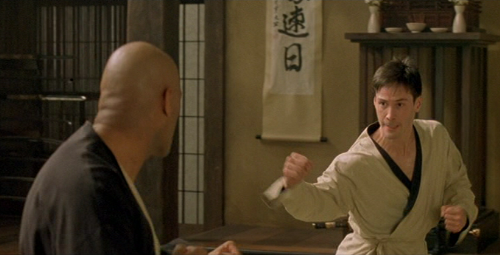 The Matrix may well be 'a computer-generated dream world built to keep us under control' but upon realisation of that it also becomes a world where you can pretty much do anything. The possibilities this raises are beyond count, but the 'real world' isn't without its advantages as well. Chief among them, besides being 'free' of course, is probably the ability to learn anything almost instantly by merely uploading the relevant data directly to your brain! What better way to demonstrate that than with a good old chop-socky fight?! 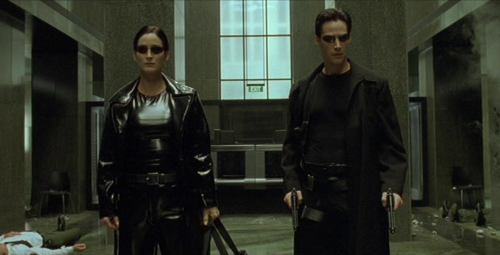 And while Agent Smith is opening up to Morpheus, what's happening downstairs? The 'suicide rescue mission' of course, and what film would be complete without one of those?! Neo, now confident in his abilities as 'The One', along with Trinity surprise the building security staff by being armed to the teeth and proceed to use said weapons to shoot the crap out of them with tremendous enthusiasm (which always disturbed me a bit - they'll still die even if they're in The Matrix, surely?), but not before they can call a sizeable backup force who are swiftly engaged in one of my favourite movie gun battles! Fantastic scene in a fantastic film. Shame the sequels let the side down, huh?
Posted by RetroKingSimon at 13:11