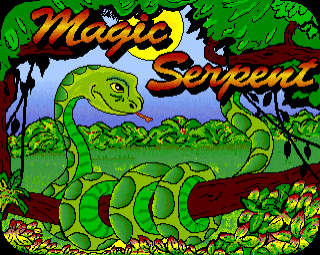 For a good number of years I absolutely hated mobile phones, or more specifically their users. Sitting next to me on the bus or at work bleeping and blooping and cycling through their bloody ring-tones… Grrrr! They used to drive me up the wall! Nowadays they are more acceptable – most likely a consequence of the rapid increase in their power and uses. One result of this is that they’re now becoming a legitimate gaming platform but back in the dark days their games were about as advanced as those on a calculator. One of the most popular was Snake which I'm sure most of you know far better than I do owing to the fact that I never owned a phone which hosted a version. Something you may not know, however, is that Snake is actually based on one of the very earliest arcade games known as Blockade, variations of which have appeared on many computers and consoles over the years. One of the last to appear before mobile phones re-popularised them was Magic Serpent.

It's quite likely that news will be greeted with as many groans as cheers (and probably a good few shrugs of indifference too), but I'm sure this effort will be much better than those pesky mobile phone versions even if it is quite a bit older! Our snakey hero actually has a name here, for one thing - Lenni - and it's his job to collect all the fruits from a series of sixty scrolling mazes. Obviously, by the game's very nature, the main obstacle he has to overcome is... himself! Indeed, as with most versions of this game, if Lenni runs into himself he loses a life, and that is increasingly likely to happen as each fruit he eats adds a 'segment' to his length. There is another obstacle too, though - a rather strict time-limit. You get sixty seconds to clear each stage. The size and complexity of the mazes varies but even on the easier ones, finding all the fruits within sixty seconds can sometimes prove a tough challenge.

As long as he doesn't slither into himself, Lenni is free to move along the passageways that make up each stage. He moves automatically and only stops if he hits a wall with paths leading in more than one direction, but can of course be steered down any other corridors too. Dead-ends aren't a problem as they have teleporters at their end which usually send Lenni back to his starting point. A few stages feature little but transporters in fact, with the challenge being to find your way through without getting sent repeatedly back! Other things to look out for include clocks which extend his time-limit, rabbits which make him move faster, snails which slow him down, and axes which reduce his length. There's also a very small map in the corner of each stage to show its layout, Lenni's position, and the location of all the fruits, which can prove mighty useful, essential even, if you want to finish some stages.

It is primarily that time-limit that makes Magic Serpent such a challenge too, as there are no enemies and nothing that can kill Lenni (other than himself). The graphics are pretty enough in an unspectacular kind of way and include ten stage themes the game cycles through, although I'm not sure why it's necessary to display a title panel across the lower quarter of the screen during play. The audio, or almost complete lack thereof, was more disappointing but overall I found Lenni's antics to be quite entertaining. It takes a short while to get used to the controls but apart from that there are no complaints. It's a shame that the bloody mobile phone fanatics ruined the reputation of this kind of game somewhat, but in so doing they also succeeded in lowering expectations of any examples played since, even if they are actually older! Magic Serpent is rather basic and repetitive - it should probably have been a budget release really - but as long as you understand and accept what it actually is beforehand, it soon proves to be rather addictive and pretty good fun in odd bursts.