In the long and jumbled history of video games, has there ever been another company like Electronic Arts? They're now among the very richest and most successful developers/publishers of all time but if you asked the average hardcore or retro gamer for their opinion of EA, most would probably have a venomous retort already scripted and ready to vent. I am firmly entrenched among them I have to say (as long-time readers here will already know), but it wasn't always that way. 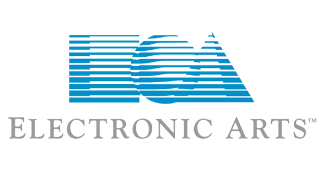 Although founded waay back in 1982 by Trip Hawkins, I was only vaguely aware of them during my Speccy and Master System gaming years. It wasn't until the era of the MegaDrive had arrived that I really started to have sufficient information to form an opinion on the company, and that opinion was... actually a very positive one! That's right, back then EA were a splendid company whose name was held in high regard worldwide, even by me. They became a prolific supporter of Sega's 16-bit monster, pretty much from the off, and new releases were always eagerly anticipated. How could they not be when they had the quality of Battle Squadron, Starflight, The Immortal, Rolo to the Rescue, F-22 Interceptor, Desert Strike, and the James Pond series? Their releases weren't all 'Mean Machines Mega Games' of course, but the quality and, vitally, the originality and creativity were of a consistently high enough standard for EA to be regarded as one of the best and most reliable game companies around.

So where did it all go wrong? Well, I think the start can be traced back to the very days I'm reminiscing about and the release of John Madden Football. At the time it was a fantastic game, even if you didn't like the real sport, but little did we know what was coming. First there was John Madden '92, the NHL Hockey, then PGA Tour Golf, then John Madden '93, then NHL '93, then PGA Tour II... Then came the big one - FIFA International Soccer in 1993.

And so it came to pass: following EA's success with their first few sports titles, their focus had shifted. Yearly updates of every sport they covered would be shoved down the throats of gamers the world over. Other sports were soon added to their repertoire such as basketball and boxing - they had even created a new sub-label known, appropriately enough, as EA Sports - and before long store shelves, and very soon after that store bargain-bins, would be awash with nearly infinite copies of their sports titles. The worst part? People kept buying them! Even today, gamers await each new release of their favourite sport with feverish anticipation, excitedly counting down the days and generally babbling away on their social network of choice, and then queueing up outside stores on the launch day. This is all despite the fact that the only differences between their quarry and the previous year's version are usually just updated team rosters and a slight cosmetic polish. Does this warrant spending £40 every year on a game that most people wouldn't be able to tell apart from the previous incarnation?

I suppose I should opine that if that's what they want to spend their hard-earned (hopefully) money on, who am I to argue, but surely EA are rich enough now that they don't need to make each 'update' a full release? I suppose I could understand it to begin with - you can hardly release a data-disk for a MegaDrive game (although yearly releases are still hardly essential), but these days there's absolutely no excuse for not releasing new team stats, rosters, even competitions, by way of download for a lower price. All current systems have this service available and many games offer extra/updated content via download, sometimes even for free.

Maybe every few years it would be worth releasing a whole new game, but only when enough has changed as to make it worth it. Some might say that EA's greed and resultant wealth is only a direct consequence of people buying the games they want, year in, year out, but I'm sure even the biggest sports fans wouldn't complain if they could just download new bits and pieces for their existing games. All EA's current stance does (aside from making them richer with minimal effort) is... well, pictures speak louder than words: 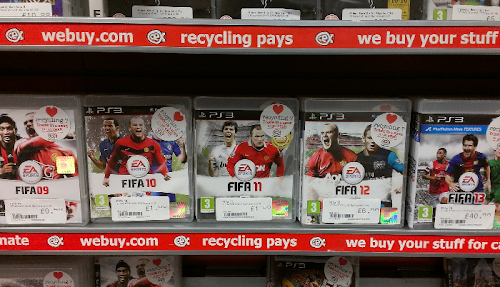 Take my recent visit to a local game shop as an example. Although I still have little interest in playing actual games on my PS3, I thought I'd have a quick browse of the titles available, but what greeted me? Row upon row of EA Sports games! To illustrate my point, I went to the trouble of lining up five successive FIFA games to show their prices (the shelf shown was filled only with dozens of copies of FIFA 12 before, with the others similarly occupying numerous entire shelves). Although it's difficult to see at this size, from right-to-left they are: FIFA 13 - £40, FIFA 12 - £6, FIFA 11 - £1.50, FIFA 10 - £1, FIFA 09 - £0.50. Even the game that's only just been replaced is over six times cheaper than the new release! How much better should a 'sequel' be to cost over six times more? Maybe I'm a cynic but I'd say it should feature more than just 'slightly improved goalkeeper AI'.

Regardless, FIFA 13 will top all the sales charts for months, sell millions of copies, and make EA even richer. Then, in less than a year it will be available for a fraction of its price and the cycle will start once again as the same gamers fall over themselves to buy FIFA 14. It's true that you could say similar things about many other products and companies but I've personally never seen such a ridiculously blatant example as the one set by Electronic bloody Arts. Come on EA, do the right thing and admit that your 'sequels' are barely even 'updates' and distribute them accordingly. That way, the next time I go to a game store, I might actually find something other than EA Sports games littering the shelves. And counter. And bargain bins. And floor. And skip at the back of the store. And being used to build houses. And...
Posted by RetroKingSimon at 17:32