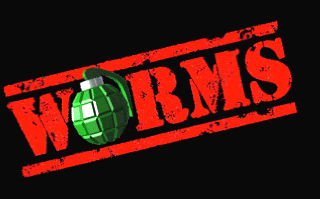 Even though I'm technically old now, I still consider myself fairly young, but the video games industry has changed beyond recognition even in my living memory. Games these days cost many millions to develop and often take years to reach fruition, and that’s with teams of a dozen or more developing them, but many years ago the opposite was true. Some of the best-loved retro games were created by only one or two people, often from the comfort of their own homes, or even by solitary students coding away into the early hours before oversleeping for their morning classes. Those days are long gone now, with regards to full releases for current systems at least, and one of the last successful examples I remember was the first in the now extensive Worms series. 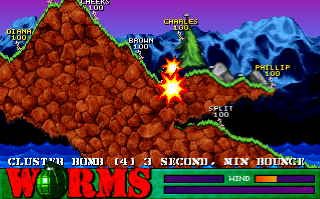 Although originally created on the Amiga by Andy Davidson and released by Team 17, it was actually on the PC that I first discovered this unusual game when someone at work brought in a playable demo they’d found on a magazine cover disc somewhere (remember those?). It was certainly an eye-catching game, especially for a PC title of that time, and soon revealed itself to be a tarted-up example of what had become known as an ‘artillery’ game. These involve two or more players (or one player and CPU opponents) taking turns to take out each other’s on-screen representative (often a tank) by way of a variable-trajectory projectile. The early examples of this type of game, one of the first of which was called ‘Artillery’, believe it or not, featured little more than one tank each on opposite sides of a rugged terrain. Worms shares this basic set-up but adds a good few coats of gloss as well. 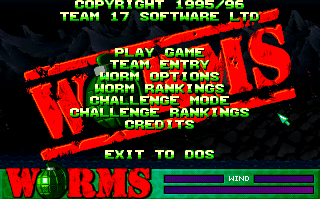 Matches here are contested by two, three, or four teams, each consisting of four worms apiece who are randomly distributed over whichever landscape the game has conjured up. From here, each team takes turns to try and take out members of opposing teams. You can't choose which of your worms you want to use - the game cycles through them - but you can choose how you want to dish out the hurt. Choices include guns, Street Fighter-inspired close-combat moves, grenades, cluster bombs, bazookas, homing missiles, dynamite, mines, or even an air-strike! A varying level of power can be applied to all but the latter and wind can affect the trajectory of some projectiles as well. Each worm starts with a hundred health points which are depleted by these weapons, with the amount lost depending on how close the strike was and which weapon was used. 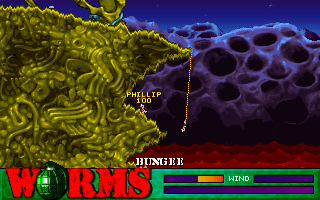 It's also possible to kill worms outright by knocking them off the side or bottom of the screen, or indeed into any liquid that may surround island-like landscapes such as water, weird green stuff, or even lava! Fortunately, you can move your worm around to a certain extent. They can walk or jump in either direction, but can't move over land or obstacles that are too large or steep. If you can't move far or hide well enough, it's also possible to use some defensive items such as positioning girders as makeshift shields, digging into the landscape using a drill or blowtorch, or moving altogether by way of ninja ropes, bungee cords, or even a teleporter! None of this is necessary on some stages though, as you can choose which one you want to face your enemy on. The game generates landscapes one at a time and you can either accept or reject it. Which is nice. 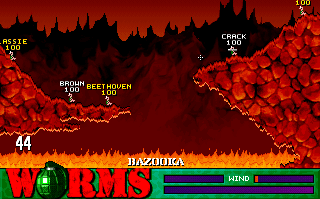 They consist of side-viewed landscapes which are randomly generated by the game engine which means they can take all sorts of shapes and sizes - some helpful, others less so. You can scroll them a short distance in either direction, zoom in and out, and move them around freely in order to plan your next attack as well as possible, and there are around ten different graphical themes for them including snow, beach, jungle, scrapyard, alien planets, desert, etc, each of which is home to its own features. Not that it really matters though, as everything can be (and usually is) damaged or destroyed by the many, many artillery strikes! The landscapes can therefore be rather varied and are a big part of what makes Worms such an addictive game, but it's not just them. 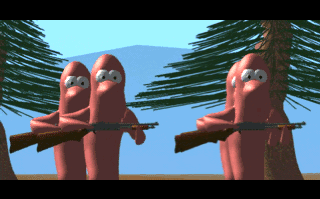 The graphics weren't technically anything special, even in their day - whilst colourful and fairly detailed, their pixelly 2D-ness was a far cry from the fancy hardware-accelerated 3D games that were flooding the system by then. They are appealing though, regardless of the lack of technical wonder. The worms are only a few pixels larger than the green-haired Lemmings (on whom the working version of the game was originally based rather than worms) but they are full of character and have animations for practically everything. They're also frequently blabbering during matches. Despite barely any in-game music (there is a Worms theme tune on the title/options screens), they and have a comment or expression for most situations and their voices are highly amusing! This and practically every other aspect of the game can, however, be customised via the extensive options screens which allow you to change things like rounds per match, time limits, weapon stockpiles (most are in limited supply by default), and add certain conditions to matches, etc. 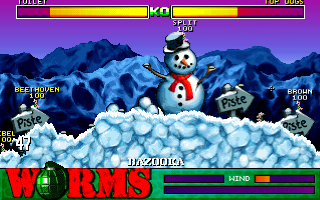 This PC version of the game also gained a few extras by way of an updated edition of the game called Worms Reinforcements. This allowed you to add custom landscapes and 'soundpacks' (i.e. vocal themes for the worms), and also included a number of humorous FMV intros and cut-scenes and a one-player 'Challenge Mode' which consisted of various missions that acted like a (rather harsh) tutorial. Some nice extras for sure, but let's face it - people play Worms for one reason and one reason only - to try and outwit their friends, and to that end it's peerless. Everyone knows that already though, of course. The only question I was asking before this review was: how much has this original aged? Initially, after having grown accustomed to later titles such as Worms Armageddon and Worms Reloaded, it seemed like a lot. Strategy games are often regarded as boring and long-winded, but Worms is about as arcadey as they get though, so once I had re-acclimatised to the older style I was soon adding to my many memorable and amusing experiences of playing this classic. 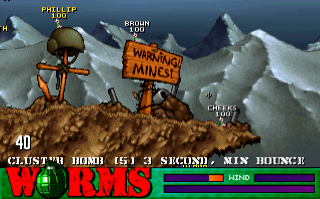 Later incarnations of the game are much more polished, both visually as well as with regards to their gameplay, but Worms has never been about flashy visuals or scaring the pants off gamers - it's about having fun, and it arguably does that better than any other series. What else comes close? Some Bomberman games, perhaps? They are also fantastic games for multi-player larks indeed, but it's more short-lived, has a faster pace, and is less strategic as well. Nothing beats taking out a friend's worm after a cunningly devised tactic pays off. Almost as entertaining is a cruelly-placed stick of dynamite (accompanied by an unsympathetic giggle from the agressor), or even a simple fire-punch off the edge of a precipice. You can even name your teams for added personality! As far as I'm concerned, all gamers owe Andy Davidson a hearty back-slap for creating one of the funniest and most riotously enjoyable multi-player games of all. Yes, the later installments are better, but this original is still hugely entertaining and addictive and probably always will be.