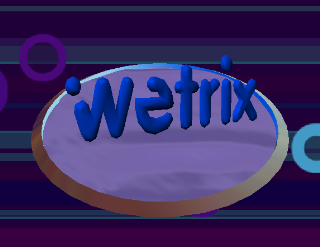 It doesn't happen too often in the gaming world, especially these days, but every now and then an example comes along, usually out of the blue, which proves to be so staggeringly successful that nearly every developer around is almost immediately rushing to get in on the action too, frantically trying to come up with their own takes on the idea. One of the biggest examples of this was Tetris. Although appearing as early as the mid-80's, its own sequels, unofficial clones, and all manner of games 'influenced' by the Soviet classic were still appearing well into the 90's. One of the last of these was Wetrix, released by the Pickford Bros near the end of the decade and initially on the N64 exclusively before receiving ports to a few other systems of the day. It's a game I've often meant to try out... and now I have. 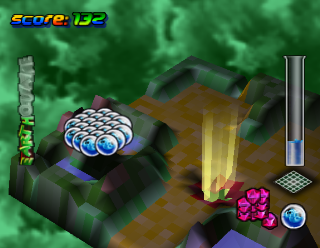 Despite Wetrix's apparent status as a Tetris clone though, there are only two similarities between the games really. Firstly, the action takes place on a single screen, and secondly, it involves arranging falling, shaped blocks. The screen on this occasion is isometrically-viewed and consists of a flat square of land. Falling down onto this, one at a time, are several things including the aforementioned blocks. There are four shapes of these - a straight piece, a corner piece, a 'T' shape, and a square outline, and they come in two forms - uppers and downers. Placing the former raises the land by one level and the latter lowers it. The pieces can be rotated freely and should be used to build lakes. That's because the next most common item is gloops of water which fill the lakes. If you haven't built any lakes or if there are any gaps in their walls, the water will leak out, and that's not good news. 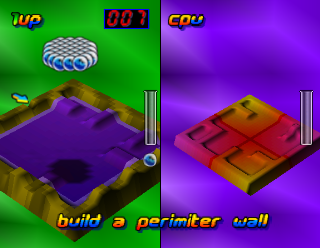 Stray water gradually fills the 'Drain', represented by a meter on the right of the playfield. Once this fills up it's game over. There are two other main items that fall onto the screen, one of which will slow this process down, the other speeds it up - Fireballs, which evaporate water, and Bombs, which create small but damaging holes in the landscape from which water can of course leak out. There are many ways to gain points, such as arranging your pieces quickly, but the main method of racking up a good score is by evaporating as much water as possible, so basically the more water that falls and doesn't spill, the more points you get. Do well and 'Rainbow Multipliers' should start to appear and lakes that become deep enough may soon find themselves hosting a 'Rubber Ducky' which gives you even more bonuses. You'll gradually advance through 'levels' the longer you last in the game, and the pieces will fall down faster and faster the higher you get. 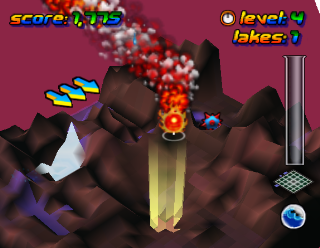 There are a few other features here and there such as ice cubes which freeze water for a while, mines which act much like bombs once they're exposed, smart bombs which return the landscape to its original form, and earthquakes which pretty much do the opposite! These can occur if you build up the land too much and they make a real mess of the landscape, potentially ending a game altogether, so reckless dropping of blocks can be dangerous. Luckily, there's a meter to tell you just how dangerous you're being, and at first that'll probably be a lot, assuming you last long enough to even fill it! Yes that's right, for Wetrix is that breed of puzzle game that starts off fairly tough already and gets harder quickly - you certainly don't get wrapped in cotton wool and walked through the first few stages. That said, there is a helpful 'Practice' mode in addition to the main game, the 'Classic' mode, to teach you the basics, and there are 'Pro' and 'Challenge' modes as well. 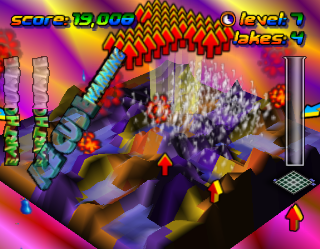 The latter of these is the most interesting and offers games with time or block restrictions, and there's also a two-player mode which rounds things off nicely. Aside from a somewhat uninspiring title and options screen, the presentation here is superb and the in-game graphics are rather nice. The colourful backgrounds aren't detailed at all but the colour of them as well as the landscape itself changes as you advance through the levels and the watery/fiery effects are splendid. The music and various sound effects are also appealing and there's some scary demonic speech too! You won't have much time to appreciate most of this though, as Wetrix is a fast-paced game which requires quick thinking and quicker reflexes. However, rather than labelling it an out-and-out Tetris clone, I'd say it was more a mixture of that and Populous, and as much as I like both those games, I was never any good at the latter and the same is true here, unfortunately for me. 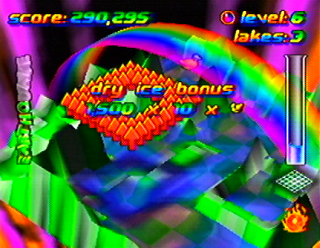 As much as I generally like isometrically-viewed games, the perspective here takes some getting used to, and despite the helpful shadows cast by the blocks/items and the fact that any leaks are quickly pointed out with arrows, I still found it hard to position the blocks (and indeed water) as accurately as the game demands. With a lot of practice, Wetrix does become an enjoyable, not to mention satisfying game once you finally hone your lake-management skills and start scoring bonuses all over the place, but I would personally have warmed to it much quicker (and probably liked it more as well) if the pace was toned down just a smidge, at least initially in order to 'ease you in' (giggity) a little more gently. It's definitely not a game that will appeal to everyone but it's a refreshing take on a genre that had become somewhat jaded and there are some great ideas. If you like twitch gaming, Wetrix is interesting and addictive example.


Special Note: the bottom screenshot was stolen from Google - I'll probably never be that good :( Credit to whomever 'grabbed' and uploaded it...
Posted by RetroKingSimon at 20:47