More often than not here at Red Parsley, when taking a look at a game, especially one I haven't played much (or at all) before, I try to first visit its original incarnation. For many, that is of course the arcade version, but for one reason or another it's sometimes one of the conversions that gets featured instead, so starting with this 'Round-Up' I'll be looking back at the arcade versions of games already reviewed. To start things off, here are five horizontal shmups! 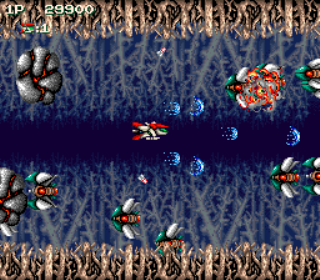 This is a game I'd heard of for a while before playing the PC Engine version, but once I did play it, it immediately became a game I wish I hadn't heard of! In my review of that version I mentioned that if its savage difficulty level was toned down, it would still merely be an average game and that's pretty much what this original is. Unusually, thanks to a greater generosity with the power-ups and slightly weedier enemies, it is notably easier than the PCE game (although still hardly a walkover) and as such it is more enjoyable, but it's still nothing special either. It was quickly apparent that graphically the Engine received a very good conversion, but given the high number and quality of shmups available on NEC's system, it probably wasn't the best home for it. The arcades are (or were) home to an even larger number of shmups and this one doesn't stand out at all, so perhaps it wasn't really welcome anywhere... 5/10 (PC Engine version reviewed here) 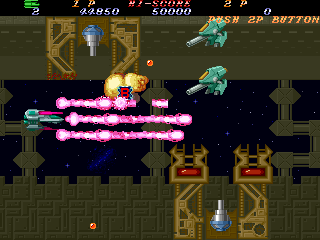 Although a vast majority of my time spent with Hellfire has been courtesy of the superb version the mighty MegaDrive received, I had actually also played this version before, but I've never put too much effort into finding it as the MD game is quite a bit better in my opinion. It does lack the two-player mode of this original, admittedly, but every other difference is a positive one. The graphics here are less detailed and colourful, the music and especially the sound effects are quieter and less appealing, and even some of the power-ups were apparently created especially for the MD as there's no sign of them here. Either that or they're a million times rarer but I'd be surprised. These small differences make Hellfire less enjoyable to play through for me, but for gamers who aren't overly familiar with the MD conversion it remains a challenging and more than decent blaster... 8/10 (MegaDrive version reviewed here) 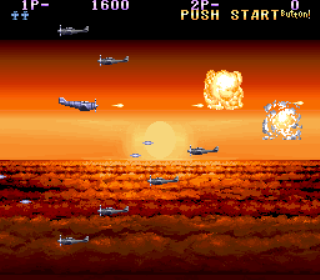 I doubt anyone who's played P-47 on any system has been especially blown away by it but I rather enjoyed the decent Engine version I played a while back. The aircraft itself is quite a cool one to base a game around and it's nice to see a side-viewed WWII shmup for a change. Playing this version now reveals how good the Engine conversion is too - there's little between them as far as I can tell. The sprites look the same (although I suppose that may not have been too challenging) and the backgrounds, whilst bolder and a bit more colourful here, are still good copies. I did notice that this original is a bit harder but that's to be expected really. So, my evaluation of P-47 remains the same as before - it doesn't do anything special and it's not particularly noteworthy in any way but is still a perfectly enjoyable slice of military blasting action... 7/10 (PC Engine version reviewed here) 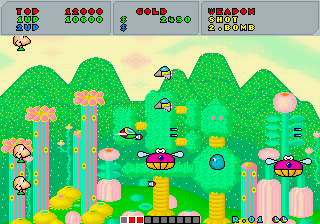 As regular readers here will no doubt already know, I'm a big fan of the Fantasy Zone series, but the first game is one I've only ever played on my trusty Master System and PC Engine. I'm not sure how common this arcade version was but I didn't even realise there was one for many years. Looking at it now, however, demonstrates how well my two favourite versions were converted. The sprites here are a little more prominent, the backgrounds are more detailed, and the colours are perhaps a bit more subtle, but apart from that everything is very familiar. It's always good fun playing a Fantasy Zone game - the unique brand of base-destroying, money-collecting action along with its push-scrolling landscapes, vibrant graphics, and catchy music make it a unique and memorable game, and this version is no different... 8/10 (Master System version reviewed here) 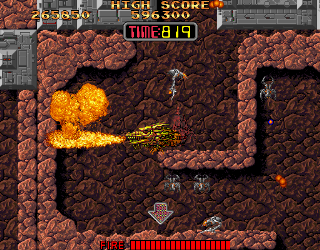 I didn't know this game well at all prior to playing the SNES version and, whilst featuring an intruiguing concept, it failed to impress me much which is strange since controlling a dragon is rarely a bad prospect. This dragon is a fire-breathing one as you might expect but is also made of metal, and he, as well the world he inhabits, are presented in initially-impressive high-res graphics. The maze-like stages also seem quite decent to start with but sadly Syvalion is a game that soon causes much frustration. Your dragon looks nice but is quite cumbersome to move around and is easily damaged, and the enemy placement is far from helpful, even in the early stages. It's clear from playing this that the SNES conversion is a good one, it just wasn't a very enjoyable game to start with... 5/10 (SNES version reviewed here)


Look out for more Round-Ups here at Red Parsley soon :)
Posted by RetroKingSimon at 20:35