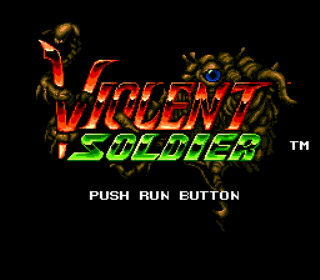 Supernovae are elusive things. They're discussed often by brainy fellows, often sporting beards, but rarely glimpsed from our humble planet. Accordingly, their majestic destructiveness is seldom featured elsewhere, not even in highly fictional theatres such as videogames, which makes Violent Soldier a real rarity in that regard. Indeed, the basis of the game is one of these very spacial phenomena which hurls a variety of debris our way. After some chaotic scenes, it's determined that the metallic flotsam was actually an attempted invasion! To counter this, an attack fleet called the Violent Soldier(s?) is hastily constructed and then sent to the source of the supernova where they find the remnant of an advanced cybernetic civilisation. Henceforth, fiery vengeance shall rain down upto them - cry 'havoc!' and let slip the dogs of war! Or something...

Fuelled by vengeance or not, the task that stands before our shiny new forces still won't be an easy one. The 'machines', as they're probably not known and don't always look like, span six themed stages which are titled: Mechanical, Gas Tunnel, Biological, Deep Space, Organs, and Cerebral Cortex. Despite this daunting prospect and the Violent Soldier ships supposedly comprising a fleet, you only get one of them to smack the enemy up with. Or perhaps one per life but it still hardly seems fair. The ships are at least quite interesting. At first it seems like a generic space craft with a puny default shot but before long the curious golden front half of the ship reveals itself to actually be an armoured jaw-like device which is used by collecting the power-ups. As well as speed-ups, there are three different weapons. The first is the 'Vulcan Flame Cannon' which you start the game with and it can be changed to the 'Crystal Pulse Laser' or 'Chaos Homing Missiles'.

All three weapons have three levels of power, accessed by collecting successive icons, and are represented by orange, blue, and green icons respectively. Collecting one allows you to open the jaws of your ship which converts your forward-firing weapon into a three-way shot covering a wider area. Collect another weapon icon and you can open the jaws even more which furnishes you with a five-way shot. This sounds like a splendid idea but it's not without it drawbacks. First of all, the jaws themselves are pretty tough things and can absorb weaker enemy bullets without any problems. However, opening them exposes your ship's cockpit rendering it vulnerable. Secondly, the more your shot is 'spread', the less powerful it becomes. Luckily, you can open and close them as you please so much of your time playing Violent Soldier will be spent opening and closing the golden clangers as and when you need to concentrate or widely distribute your fire.

It's also worth mentioning that when the jaws are open, their near-indestructible nature means you can damage enemies with them directly, although it's often rather risky to do so. This brings me to the final power-up available known as 'Plasma Droids'. These devices are quite small but very handy too as they, like the jaws, can absorb the weaker enemy fire as well as damage enemies they come into contact with. You can have two of them and they sit above and below your ship covering the rear section not protected by the jaws. As if this all wasn't enough, you can also emit a short range 'pulse' by charging your main weapon for a few seconds which causes damage to anything it touches. It doesn't seem like it's much use to start with but, in my experience at least, it's the only thing that can damage a few of the enemies, and is certainly useful against some of the later ones.

Those enemies are a diverse bunch too, as you may have noticed from the screenshots here. Befitting their robotic and/or cybernetic nature, many are formidable machines, mostly of an airborne, rocket/laser firing variety, but there are also plenty or organic (appearance-wise, at least) creatures flooping around as well, in addition to the many scenery-mounted guns, some of which are fixed while others can move around. Whatever shape your adversaries take, most of them look pretty good. They're nicely varied, as are the backgrounds which change mid-way through some stages. A couple feature little more than a basic starfield but some such as the the Biological and Cerebral Cortex stages are colourful and memorable, and each stage is accompanied by some mighty fine music and effects. The end-of-stage bosses are a bit of a mixed bag. The background becomes all wibbly when you reach some of them, which is nice, but the bosses themselves range from impressive to rather amusing!

Whether you like the look of them or not, though, I doubt you'll have too much trouble defeating them - if even I can best them without breaking a sweat, anyone can! The main stages are more challenging than their guardians and I'd love to say that the increase in difficulty is nice and gradual. Sadly, I found it quite abrupt. The last two stages even resort to highly unfair deaths to halt your progress, such as annoying idiots dropping on you very quickly from off-screen, which of course see you stripped of all power-ups. That's my only gripe with the game though, which is otherwise a fairly decent addition to the Engine's shmup library. The ‘Organs’ stage is highly annoying but other than that the stage design is reasonable enough. Much of the enjoyment of playing Violent Soldier is down to its rather strange-looking but effective ship and the power-ups it can use. A slightly obscure game then, perhaps even an under-appreciated one, but it only appeared on the Engine and it's pretty good so give it a try.