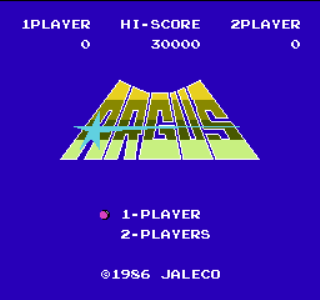 The NES isn't really the first system that leaps into my mind when thinking of shoot 'em ups or arcade conversions but it does have a surprising number of them. One of the less well known ones must be this one, converted from a Jaleco coin-op of the same year and released only in their homeland, but initial impressions of it indicate a somewhat older game. It's an overhead-viewed game but to call it a vertical-scroller isn't completely accurate as your small generic aircraft can also fly sideways. That's pretty much a given in games of this nature, of course, but here the play-field is about two screens wide and loops infinitely as well. The object is still to go forward though, and there are nine stages to do this through, each filled with swarms of enemy vessels and guarded by a large boss. There's even some 'looping' going on here as well though - if you manage to conquer all nine stages, which is a tough ask, you'll simply return to the first stage again. Bah, what a swizz!

The enemies are seemingly infinite and consist of formations of small alien aircraft, all of which are continually shooting their rather large bullets at you. There are also indestructible metallic structures to be avoided and ground installations which yield various power-up icons. All enemies are taken out with a single shot from your ship's feeble default cannon but to grab one of the power-ups, you need to bomb it Xevious-style. There are three icons to look out for too - collect three P's to upgrade your main weapon, collect three B's for a temporary shield, and collect L's for possible bonus points at the end of the stage. Your main weapon also alternates between stages. On odd-numbered stages you can upgrade it to a more powerful forward-firing triple shot while even-numbered stages replace it with a couple of forward-diagonal shots which bounce off the metallic structures.

The only other feature of note is not an obvious one. You may notice that your ship casts a small shadow on the ground. You may also notice that on rare occasions, a similar shadow flashes on and off in various locations around the landscape. This is actually another power-up of sorts. If you manage to place your ship’s shadow over one of the rogue shadows, your ship will turn into an invincible flying robot! This only lasts a short while of course, but whether you catch it or not, if you can survive for long enough you'll eventually reach a boss. This imbecile takes the form of a metal ground-based device which requires a single but accurately-placed bomb to despatch. If you don't manage it within a set time-limit, it leaves of its own accord. Sounds easy, I agree, but it's accompanied by a steady stream of standard enemy vessels and it can fire a good number of bullets itself. Whether you manage to destroy it or it scuttles off, you’ll then have the opportunity to land your ship on a handy stretch of runway. It’s not easy as you have to carefully alter your altitude until you touch down but if you manage it you’ll receive bonus points for any ‘L’ icons you collected during the stage.

This is the part of the game I always seem to make a mess of but luckily it doesn't cost you a life. Otherwise, the game is pretty tough going and a mistake here does cost you a life! It can be made a little easier, providing you’re content with your default ship. Pretty much all the lives I lost were as a result of trying to land bombs on power-up icons. This requires a very accurate shot which, despite the permanent presence of a crosshair aiming thing, doesn't always yield the desired result. It’s actually far easier to progress through the game by avoiding them most of the time. Most enemy ships and fire can be avoided by flying sideways. Although usually moving in patterns, they can sometimes be a bit unpredictable, but dodging them is rarely too taxing. In fact, you can pretty much spend the whole game flying sideways without encountering too many problems! Visually, Argus reminded me the original Thunder Force game and it’s even less varied despite being a couple of years newer. As mentioned, it has nine stages but only three of them are unique in appearance and even those aren’t completely distinctive.

All three take place over coastal areas, for example, with orange or green land areas and blue watery bits. Only the middles of the stages are really unique which is where most of the ground installations with all the power-up icons can be found. These are a rather garish red on the first, a nicer blue on the second, and orange on the third. The colour schemes change slightly as the stages repeat but the colours used through the game generally, including on the small sprites, aren't always the best choices and the music isn't very pleasant either, which sums the game up really. It can be reasonable fun and doesn't actually do anything major wrong, but the lack of variety in all areas makes an already rather dull game even less interesting, sadly. Even the boss is the same on every stage for goodness sake! Although your ship moves rather slowly most of the time, the controls are okay, and it's a reasonable conversion (even if there are a few things missing, especially stuff on the ground), but even I know Nintendo's magic box is capable of so much more than this.