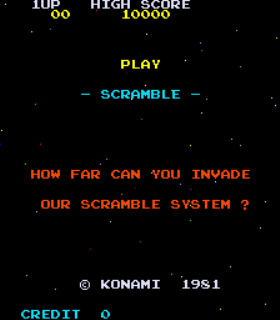 As I mentioned in the first post of this new Arcade Classics feature, its primary purpose, much like that of Red Parsley as a whole, is one of discovery. There are far too many games for anyone to have played all of them but I’ve played far fewer than most people who call themselves gamers. In many cases this is a result of owning a rival system, not knowing about a particular game, or simply never having gotten around to it, but some of the earliest games were missed because I was too young to realistically play them, and it’s these games I’ll be covering here. One that I’ve heard about frequently over the years but never played, or even seen running, is the mighty Scramble. 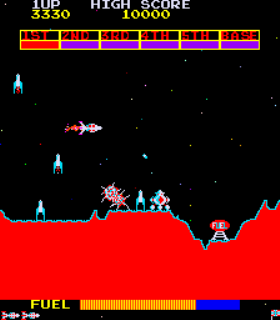 And mighty it is too, for according to Konami it's actually the first game in the immortal Gradius series! Konami's later game was a ground-breaker in many ways with its level structure, power-up system, and bosses, and while very little of that was inspired by Scramble, it was seemingly a fairly innovative game itself. It wasn't the first horizontal-scroller but its format is much more akin to the ones we soon came to know. There are six stages in total which flow straight from one to another without delay and most of them take place over an uneven mountainous terrain bristling with enemy defences including small flying saucers, bases and fuel depots, and missiles. Lots and lots of them. 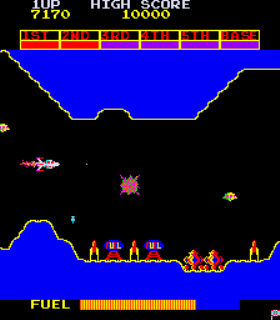 Your vessel through the game is a 50's B-movie style 'rocket ship' which, in defiance of the laws of physics, or perhaps aided by very low gravity, automatically flies sideways through each area. It's armed with a forward-firing pea-shooter gun, and air-to-ground missiles, both of which are in unlimited supply and should be used copiously to take out as many of the enemy defences as possible. The enemy missiles automatically fire directly upwards as you near them and the flying saucers are typically wibbly, but if you manage to destroy or avoid them, the bases and fuel depots are sitting ducks, although they're often positioned so as to make hitting them rather tricky. 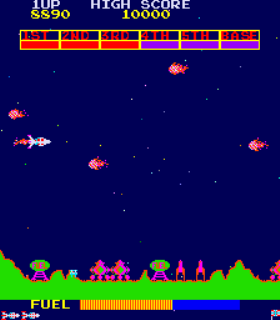 This is compounded by the fact that your rocket can only fire two missiles at once, and of course the craggy terrain is just as hazardous as the objects that litter it - the merest hit costs you a life whether it comes from the scenery or an enemy. Although it's quite slow and there's no way to speed it up, movement of your rocket is unrestricted except you can only advance about half-way across the screen. You also have a limited supply of fuel which is replenished, oddly, by destroying the fuel depots, but this is the only item that has any use beyond points. Despite the existence of only six stages, the colour scheme changes regularly during play rather than just one per section or area. 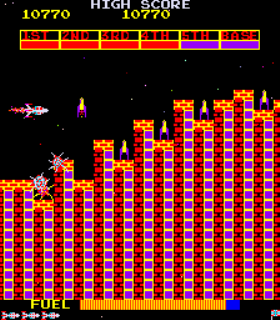 This helps to make Scramble one of the more colourful of the early arcade classics, and the fairly short stages are surprisingly varied too. Different coloured mountains are dominant to start with but before long you'll find a cavern filled with flying saucers, a tricky meteor shower, and a city which precedes the enemy base itself. Finishing all six areas isn't too taxing after a bit of practise, although some very precise piloting skills are required to navigate through the base, but doing so merely returns you to the start of the game so it's a great title for high-score chasers. The non-stop action is rarely unfair and is unusual for such an early game in that it doesn't force you to memorise the stage layouts, positions of everything, and follow exactly the same routine each time. You can do whatever you want really - fly high and avoid as much combat as possible, skim the landscape trying to take out everything you can, or anywhere in between. While hardly a free-roaming game, it's still the kind of freedom missing from many titles of the era which, while often very addictive, usually offer little scope for improvisation during play. It's a simple game for sure - there's no music besides an 'intro jingle', the background is a starfield throughout, and the sprites change only by way of their colour - but it's also at least as addictive as its contemporaries and even more enjoyable than many of them. Some say Scramble has aged badly but I thought it was a corking game...