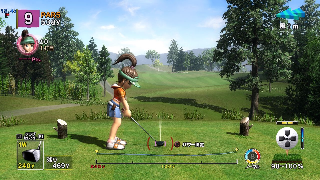 As I’ve probably mentioned before, I’m a big fan of arcade-style golf games and some of my favourites have been the various instalments of the spiffing Everybody’s Golf series (known as Hot Shots Golf in the US). The PSP version took up a startling amount of my time so when I bought a PS3, World Tour was one of my first stops. First impressions of it, however, have proven more mixed than I had expected. The graphics have been significantly improved as you might expect with some beautifully presented courses, but some of my favourite things about previous games have not seen improvement. Quite the opposite in fact, based on my first impressions. There's a new shot/power gauge system which takes some getting used to (although it's optional, luckily) but the characters are now rather irritating, especially their comments and post-shot animations. I also greatly enjoyed unlocking and using all the many nonsensical accessories on the PSP version and that is apparently gone from here altogether. It's still a highly enjoyable game with some nice touches though, and there's a lot to it. It's just not as magnificent as I was hoping.