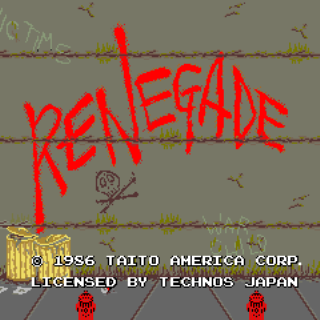 Poor old RKS has a tough life as a gamer. Despite being relatively normal in most ways, I only have few friends who share my interest in this particular subject and only one who also likes retro games, and he lives far enough away that I don’t see him often. When we do meet up, one type of game we nearly always play is scrolling fighting games, but it only occurred to me recently that we always play the same few: Double Dragon, Final Fight, Streets of Rage, Golden Axe, etc. Upon realisation of this, I decided to give a few other examples a try to vary our rare gaming sessions a little. One of the first games I thought of was Renegade – one of the first such examples of the genre and supposedly also one of the best which, alarmingly, is yet another title I’ve never gotten around to trying. Playing it for the first time for this feature, however, revealed that it’s not strictly speaking a scrolling fighting game at all. Hmmm.

As most of you probably already know, each of Renegade's meagre four stages are quite small. They do scroll, but are only about four screens wide - a space which is populated by different 'hoodlums' on successive stages as well as a boss character who becomes active once only three of his henchmen remain. Your job as the unnamed (in the arcade version, at least) vigilante is merely to beat the crap out of them. You can move in eight directions and there are three buttons - one attacks in the direction you're facing, another attacks behind, and the last performs a jump. A double-tap of either direction allows you to run and you can attack while doing this or jumping. Even the most basic enemies require numerous hits to defeat but you can knock them to the ground fairly easily at which point you can straddle them (oo-er!) and continue smacking them up. It's also possible to grab an enemy and perform a throw but they can grab you as well. All of these moves can also be performed on the boss characters, but since they're stronger the attacks are often less effective.

The four stages take place on a subway platform, a harbour, an alley, and the gang's hideout, and each is home to unique enemies. The amount of energy their attacks cost you is dependent on what they attack you with. Some have only their fists but others are armed or even riding motorbikes. Thugs wielding knives or guns can even kill you outright with one hit, and this makes an already rock-hard game harder then ten adamantium-coated diamonds! You only get one life, you see, and unusually for an arcade game you don't even have the option of adding coins to continue. I'm not an especially gifted gamer, admittedly, but I was having so much trouble I even had to resort to fiddling around with the DIP switch settings. However, despite changing the difficulty to easy upping the lives to the maximum of two (!), I was still making little headway. The extra life wasn't much use as it makes you start the stage again anyway, so I decided to try a more strategic approach of running around and picking off thugs only when an opportunity presented itself. And then I ran out of time instead!

Even some sneaky tactics such as knocking enemies off the end of the railway platform on the first stage usually backfired as I was knocked off instead. Boo hoo. It's quite a nice-looking game though. Stage graphics are good and the sprites, whilst not too numerous, are varied, distinctive, and animated fairly well too. The sound isn't bad either, with average music but pretty good effects and even the odd snippet of speech ("Get lost, punk!"), and it's an exciting, action-packed, and enjoyable game to play, but that difficulty means that any enjoyment is usually short-lived. Even having not previously played it, I knew that Renegade was a landmark title that brought with it several innovations, but I wasn't expecting it to be so unforgiving! Arcade games are usually tough but would a continue feature have been too much to ask? Renegade is actually a Western 'localisation' - the original Japanese game is part of the 'Kunio-kun' series, so I'll have to give that a try to see if it's as tough. For now though, I'm either a wussy who needs a lot of practise, or by jove, Renagade is a toughie - too tough for me!