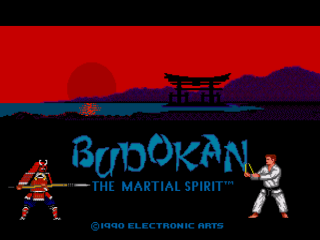 Whilst born in the arcades and probably always most successful there, the immediate popularity of one-on-one fighting games meant that original titles were soon appearing on the home machines as well. I've already started looking at some of the arcade offerings, so in this new feature here at Red Parsley I'll start taking a look at some of the many computer and console exclusive ones as well. Most of these are clones, or ‘inspired by’, the arcade titles as well but some are wholly original, even creative. The first one that popped in my head for some reason was Budokan, released by EA back before they started sucking. It's been a while since I played it but I remember it being pretty good, if rather tough. This was before I got drawn into Capcom's brash, over-the-top world of Street Fighter derivatives though, so I wonder how well EA's game holds up today.

Its title has several meanings including the name of a style of karate which is ironic as that martial art comprises only a quarter of the game which stars you as some unnamed street hoodlum who’s convinced by a stereotypical wise old grand master to mend his ways, learn the way of the warrior, and compete with honour at the Budokan, which is apparently also a tournament held in the great Budokan Hall. There’s much to do before that though, for this is no ordinary fighting game. After a brief synopsis, outlined on ancient scrolls of course, and a few wise words from Mr. Miyagi, as we'll call him, you find yourself in the courtyard of his dojo. From here you can go seven places – training rooms for four different fighting disciplines, a sparring arena for one or two players, Mr. Miyagi's temple for some more profound musings, or the exit which takes you to the tournament.

As the great man himself says, it's extremely wise to spend some time practising the four disciplines before you start stumbling aimlessly around Budokan Hall like an oaf, and they are Kendo (fighting with bamboo sword and basic armour), Bo (a six foot long staff), Nunchaku (two sticks connected by a chain), and the aforementioned Karate. The training room for each of these allows you to practise by yourself, or against one of three computer-controlled sparring partners. The moves you can perform is of course dependent on which discipline you're using but they all use various combinations of the eight directions of the controller and the attack button of which there is only one. Pressing either left or right places you in your 'special move' stance while the forward and backward diagonals are used for walking and jumping in either direction.

Basic attacks can be performed by using the appropriate button while in the relevant stance and you can block incoming strikes by using forwards and the diagonals when your opponent sends something your way beyond 'hah-yah' noises. It's not simply a case of wearing down your opponent’s energy bar though. The equivalent here is the 'stamina' meter but there is also a 'ki' meter as well which determines the power of your moves at the time of impact or even your ability to perform some moves to begin with. Fights take place over just one round and you start each with a full stamina meter and an empty ki meter. Opponent strikes obviously drain your stamina but it will gradually recover, and your ki meter will fill up, for as long as you avoid taking hits from your opponent. Easier said than done, obviously!

Once you've practised and mastered each discipline, as well as digested Mr. Miyagi's many words of wisdom, it's time to tackle the Budokan tournament itself which is a bit reminiscent of the Kumite featured in the splendid JCVD film, Bloodsport. Luckily, this one doesn't make you qualify for the tournament by way of a 'Dim Mak' and instead thrusts you straight into the first of a potential twelve tough matches. Opponents use a variety of disciplines, including some techniques and weapons not available to you, but you can choose which of your four disciplines you want to use against them. However, you can only use each one up to four times so you can’t just smack everyone up with a kendo sword! Indeed, patience and strategy are required here in abundance over manic button-mashing tomfoolery - anyone who takes that approach will make very little progress.

It's not even realistically possible actually. As there's only the one attack button, each move you perform needs to be planned in advance as well as executed at the right time. Budokan is a game that split opinions among the gaming press of the day and it’s this aspect of it which seemingly caused the division. The pace of the action is slow. It's a game that should be played in a careful and considered way. Trying to play like you're in an arcade playing Street Fighter 2 or something will lead to frustration, and that's the game's biggest problem. The controls take a lot of getting used to - even if you've studied the instruction manual and memorised all the moves, actually executing them is another story, to begin with at least. First impressions are that the controls are horribly unresponsive and sluggish, and as a result of the 'ki' system, that feeling never fully goes away.

Realistic or not, the controls often prove an irreparable turn-off for many Budokan players. Something else that disappoints some gamers is the audio and visual aspects of the game. Again, thanks to the more realistic nature of proceedings, there's no battling through neon-lit streets, bar-rooms, factories, etc - here it's sensible training rooms and combat arenas which means there's isn't too much variety. That applies to the sprites too. Some opponents in the tournament are quite interesting but most have a similar look as you can no doubt tell from the screenshots here. They're all animated well though, even the realistic and impressive shadows, and the backgrounds are quite nice even if there isn't many of them. Along with the oriental-style music and effects, they create a great atmosphere.

Sadly though, the fact is that even with authentic visuals and music, and a selection of real and realistically-portrayed martial arts, most gamers won't give Budokan the time of day. I can understand this to some extent - it is frustrating to start with and progress is slow. Most gamers play fighting games simply to smack the crap out of some computer-controlled idiots, or even better, their friends in a two-player battle, and that's something that Budokan can't really cater for. There is a two-player mode but it's a rather limited one restricted to short one-off battles that have nothing to do with the main game beyond offering a bit of practise - the emphasis is very much on the the one-player game here and, while clearly a lot of thought and effort has been put into it, it's not really one that will appeal to most gamers. If the thought of a slower, more cerebral combat game sounds like your thing though, this could be the one you've been looking for. Try with caution!