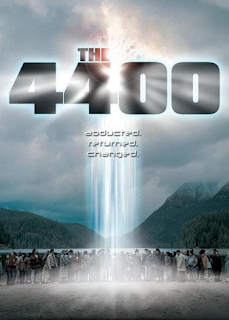 I must admit, I'm pretty picky when it comes to watching TV shows. When I first saw The 4400 advertised I immediately thought 'blah, blah, blah', another stupid 'ordinary people with special powers' show and dismissed without a second thought. Until, that is, a couple of months ago when I noticed it was one of few shows available to stream via Netflix. This is probably the greatest advantage of a service like Netflix – I can try one episode, or even just the beginning of an episode, instantly without any trouble, rather than having to risk some cash or go to the effort of catching it on TV. After reading a brief synopsis of the show and realising that it sounded at least potentially non-crap, that was exactly what I did.

The basis of the show involves the return of 4400 people of all shapes, sizes, races, and nationalities, who were missing and presumed dead. It turns out that they were actually abducted over a period of about fifty years but now they’ve all been returned at once on Highland Beach at the foot of Mount Rainier, close to Seattle, in a ball of light which was initially assumed to be a comet... until it started slowing down! All 4400 of them are dropped off in the same place at the same time so they’re understandably confused and disorientated, particularly since as far as they’re concerned no time has passed since their abduction and accordingly they haven't aged a day either.

The events of the paragraph above are set up in the opening scenes of the first episode which shows the abductions of what would soon become some of the main characters as they disappear in beams of light from above. The series predictably focuses on a small selection of American ‘returnees’, as they’re initially dubbed, including Shawn, a college student, Maia, an eight year old girl, Richard, a Korean war pilot, Lily, a wife and mother, and Jordan, a real-estate mogul. Taking charge of the arrival of the 4400 is NTAC (National Threat Assessment Command), a division of Homeland Security, who initially place them all in quarantine. One of the teams responsible for keeping track of the returnees is Diana and Tom, the latter of whom is Shawn’s uncle and father of Kyle who was with Shawn on the night of his abduction and has been in a coma ever since. As the returnees try to pick up the threads of their lives, it becomes apparent that some of them aren't quite the same as they were before their abductions. Although this first season only takes the form of a six-episode mini-series, a lot of information is packed into the four-and-a-bit hours including the revelation of who abducted the 4400... and why. A fantastic start to a very promising show... 8/10

Not only was the first season mighty intriguing but it must've been at least a moderate success too, as the second contains double the number of episodes. Although still a small number by the standards of most American shows, it's more then welcome nonetheless! Most episodes centre on Tom and Diana investigating a different non-main character with one of the strange new 'abilities' that some 4400 have exhibited since returning. They soon start to theorise that the 4400 were returned at a very specific time and with very specific abilities in order to propagate changes to the timeline. At the same time, the '4400 Centre' and estate established by Jordan in the first season almost as soon as his return, is growing in influence as well as size, but Shawn is struggling to keep it up and running by himself. Some other 4400s - known as the Nova Group - have taken to terrorism. Meanwhile, Kyle is now free of his coma but is far from free of the strange forces that placed him in it to start with, and Richard and Lily, now a couple, are on the run from Jordan who wants the baby Lily is pregnant with - a baby she was apparently impregnated with during her abduction. This second season has less of an air of mystery about it than the first but, as many of The 4400 begin falling ill with a strange virus, starts bringing to light a worrying conspiracy that more than makes up for it... 8/10

The biggest story of the third season is probably that of Isabelle - Richard and Lily's baby who has somehow grown to adulthood literally overnight. Her purpose is unclear, even to her, but one thing's for sure - she's not only in possession of a 4400 'ability' but many of them, making her the most powerful human on earth! Under the guidance of Shawn's advisor, Matthew Ross, she pursues a relationship with Shawn against her father's wishes. Elsewhere, Tom and Diana spend less of their time investigating stuff and more of it involved in spooky goings on, mostly 4400-related as you might expect. A couple of new characters are introduced this season and some lesser characters from previous seasons are also given bigger roles including one who comes back from the dead, or seemingly so at least, bringing with him the promise of changing the world. Apparently at the source of this change will be promicin, the substance that has given the 4400 their advanced abilities which has now been synthesised. Does this mean anyone can potentially 'unlock their ability'? This third season remains as intriguing as ever but seems a little less 'structured' than the previous two. That could be a good or bad thing depending on your preference but the story and various sub-plots are always interesting... 7/10

Boo hoo, the fourth season is also the final season, and if you know what I did before watching the series, it's as frustrating as it is entertaining! Without giving away any of the major plots, let's just say that the producers were unaware it would the final season at the time of filming so the main story is left annoyingly unresolved. The scale of events is certainly gathering pace here too - Shawn is running for city council, Richard is on the run, Isabelle has been forcibly placated, and Jordan has annexed part of Seattle itself and dubbed it 'Promise City'. Promicin is now illegal but it's still being distributed anyway, but is it safe? It works on some at least, and much of Tom and Diana's attention is focussed on these non-4400 'P-Positives' - normal people who've taken the promicin shot. One major new sub-plot introduced this season is that of 'The Marked' who are a small group of covert operatives intent on stopping the 4400 and the spread of promicin, and to undo the changes already made. It's unclear how successful they are but I imagine they would've formed the basis of the fifth season. Sadly though, the show was cancelled prematurely. Which makes me very angry! There are a few weak points during this season but most of it it fantastic and a worthy-though-unintentional send-off... 8/10

Well, it was over far too quickly for my liking - the entire show only consists of 43 episodes, not even two seasons of a normal-length American show - but if there's one thing that The 4400 has taught me, it's that I shouldn't prematurely judge a show based on a quick advert and then dismiss it! Yes, many are still crap, but as I've now discovered, some are not. The basic premise behind the show doesn't sound too original - the whole supernatural 'humans with mysterious powers' thing has been done time and time again over the years, especially in recent times, but the creators of The 4400 have certainly put an interesting spin on the concept.

Much of the appeal of the show is down to its likeable characters which is largely down to superb casting and a high-standard of acting throughout. Even the 'bad guys' are difficult to hate as they all have their own agenda and you can usually see things from their point of view as well. Many sub-plots or incidents may seem implausible or even downright preposterous if you were talking about the show with someone who's never seen it, but the acting as well as consistently good dialogue usually makes everything seem sensible enough and the snappy pace means you'll be too intrigued by the story to dissect and analyse things too much.

As you may have guessed by now, although sceptical at first, I was quickly drawn in by this superb show. It's a real shame it was cancelled, especially without sufficient notice for its producers to craft a 'proper' ending. Some of the plots left open have been wrapped up in a novel released a little later but a few more seasons of this great and oft-overlooked show (yes, yes, I know - by me as well!) would've been mighty tremendous. It makes me angry really, when I see how many seasons some truly horrific shows end up with, but at least The 4400 exists at all I guess. It's definitely a show I'd recommend then, but prepare to be frustrated by the end!
Posted by RetroKingSimon at 13:07