As regular readers here may have noticed, I’m rather keen on Nintendo’s splendid F-Zero series. It therefore makes me mighty sad that they’ve ignored the series for a worrying eight years now (and counting). Fortunately, unlike fans of some other forgotten series’, we F-Zero fans at least have a decent number of games to flange around with. None of them are bad games in my opinion, and I’ve now covered each of them fairly in-depth here at Red Parsley so I’d like to think I’ve got a good overall impression of the series as a whole. So, as a final evaluation of the series, here’s its Top Five entries:

All the individual F-Zero reviews here at Red Parsley can be found here... 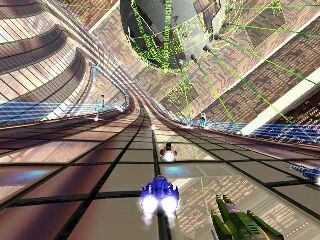 Anyone who’s perused my F-Zero reviews here will know that GX received the lowest score of any of them, so why’s it here in this list? Well, as I said at the start of the feature, no F-Zero games are actually bad, just varying degrees of good, and although GX disappointed me considerably, it’s still the most technically advanced entry in the series and therefore offers the kind of hyper audio/visual experience that even the N64 game can’t match. Everything is significantly more detailed, especially the previously-plain backgrounds, and the attention-to-detail is remarkable – you can even see the pilots operating the controls through their cockpit windows! Sadly, the gameplay didn’t see a similar level of improvement – quite the opposite in fact. It’s still an exciting racing game but the precise controls and intricately-paced action has largely been replaced by a fluorescent, adrenaline-surge of an experience. It is quite an experience though! 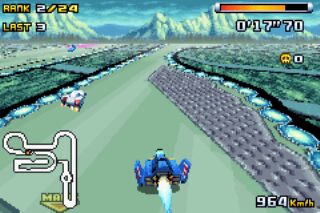 The last couple of F-Zero releases were found exclusively on the Game Boy Advance and Climax is the most recent of them, and that in itself is a real shame - would the DS not have been an ideal place to continue the series? Boo hoo! Anyway, as the final release, Climax surely had to offer at least something that none of the others had, and it did… if you discount the 64DD expansion pack. Indeed, as well as offering the usual mixture of SNES and N64 features, there was also a course editor. Sadly, Climax features flat courses much like the original game so there’s no option of adding loops and floopy bits like the 64DD release, but pretty much anything else is possible, and it makes a great addition to an otherwise-solid entry in the series. 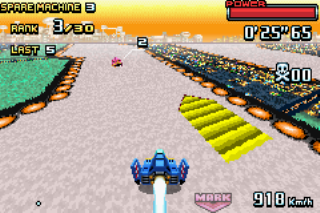 Despite my love of the F-Zero series, I’ve no idea how popular it was. I know most games are well regarded though, and at one point the series was ‘big’ enough to see the creation of an anime based on it - GP Legend. It wasn’t long before this anime then in turn had a game based on it too, and the result is in my opinion the best of the handheld releases (though only marginally so – they’re all good). As well as a great set of Grand Prix events, there’s also a ‘Zero Mode’ as well as a ‘good characters vs bad characters’ story mode to get stuck into, and they even managed to squeeze in some new course themes as well. To me, this feels like the natural continuation of the SNES game and is a spiffing racer in its own right. 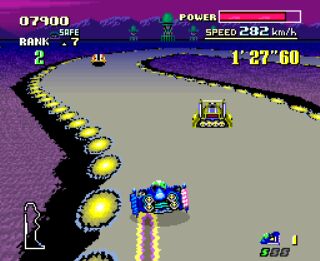 Part of the reason I broke my self-imposed aversion to all things Nintendo was the highly tantalising looks of this game in magazines of the day. When I saw it running I could hold out no longer and put a SNES on my Christmas List. Aside from Super Mario World which came with it, I received two games – Super R-Type and… F-Zero! It was worth breaking my allegiance to Sega for as well. In addition to its dazzling visuals and fantastic soundtrack it was a superbly designed and original racer which single-handedly brought about the whole futuristic racing game craze (yes, including the stylish-but-inferior Wipeout). Many of the course themes, characters, and features we’ve come to know and love started right here. This in itself is reason enough to champion F-Zero but remarkably it still plays superbly as well. A genuine classic. 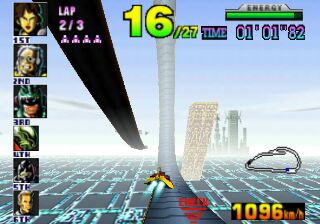 I’ve burbled on and on about this game over the years and it is of course one of only two games reviewed at Red Parsley to earn a prestigious ‘perfect ten’ score, so it shouldn’t come as too much of a surprise to see it earn another accolade by topping this list! The advance in gaming technology between the release of the first game and this sequel meant expectations were very high. Some fans were disappointed by the lack of background detail but most felt as I did – jeeeezus! The already-fairly nippy action had been upped to face-melting levels and the previously flat courses had now been contorted into twirly, twisty, loopy, 800kph+ roller-coaster rides complete with all manner of crazy features. It wasn’t all aesthetics either – the races now featured thirty distinct competitors and the action was fine-tuned to perfection, making for some of the fastest, most exciting racing imaginable. Arguably the greatest arcade-style racing game ever…


Final words on the series? Bring it back Nintendo, damn you!
Posted by RetroKingSimon at 13:35