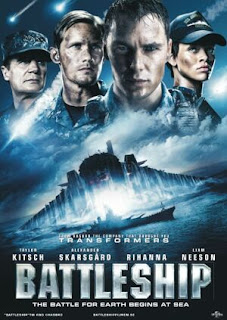 Tagline: "The Battle for Earth Begins at Sea"

Some of the harsher film critics around have been saying for years now that Hollywood is running out of ideas. I suppose with the mass of remakes, reboots, and pictures based on video games or TV shows, they may have a point, but this is the first film I've seen that's based on a board game! Indeed, it's not just the name they share - this film is actually directly inspired by the paper and pencil game created over 80 years ago and even endorsed by its original creator, MB Games. Even with a concept as open as this, though, it would surely be too easy to have two naval forces facing off against one another. Instead, the forces of Earth are presented with a much more otherworldly foe, and to this end the producers sought the help of a far more recent, not to mention significantly more scientific phenomenon - extrasolar planets.

One such planet with conditions similar to Earth is found so a signal is sent using a powerful communications array in Hawaii, amplified by an orbiting thingy. Meanwhile, ships from around the world have converged on Hawaii to take part in RIMPAC naval exercises and it's at this time that the inhabitants of 'Planet G' send their response to our signal - some scary visitors with somewhat less-peaceful intentions than we had hoped! Upon arrival, the aliens erect a force-field around the Hawaiian islands leaving three of our ships trapped inside with their new friends - the USS Sampson, commanded by Stone Hopper (Skarsgård), the USS John Paul Jones, on which Stone's bother Alex (Kitsch) serves, and a Japanese destroyer commanded by Captain Nagata (Asano).

Backing up the big players are enthusiastic gunner, Cora Raikes (a rather Michelle Rodriguez-like Rihanna), as well as 'Ordy' (Plemons) and 'Beast' (Tui) of the John Paul Jones. The fleet is commanded by Admiral Shane (Leeson) and eye candy comes in the form of Sam (Decker), the Admiral's daughter with whom Alex is 'involved'. She's a young physiotherapist who's on dry land helping a veteran double amputee, Mick Canales (Gadson), adjust to his new prosthetic legs when they bump into scientist, Cal (Linklater), who's fleeing from the now-occupied communications array. Despite their numbers, however, only a couple of the characters are given anything resembling a backstory and there's little in the way of exposition regarding the invasion such as who's behind it, and what they want.

I suppose that's not really the point with a film like this, though. The point is action, and lots of it, and that's something that Battleship does well. It actually reminded me of Battle: Los Angeles on more than one occasion and like that film, the explosive battle scenes and desperate struggle against a far more powerful enemy comes at the expense of a decent script. The acting is all reasonable enough though, and that action, which includes a rather unsubtle reference to the original board game by way of a radar-assisted night time battle, is big, loud, and exciting, so whether you like Battleship or not really depends on whether you're able to enjoy brash, brainless 'invasion' films with sprinklings of iffy dialogue. There are a few cringe-inducing moments here but overall it's pretty entertaining and visually stunning. About as good as a film based on a board game could be!