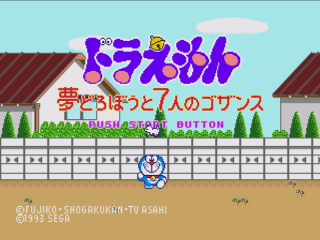 Everyone who has ever been lucky enough to encounter Doraemon immediately becomes aware that he's the King of Everything, but sadly he's only really famous in his homeland of Japan, as well as a couple of other countries nearby, so his miraculous wonder remains unknown to so many, and that includes the videogames based on his exploits of which there are lots. Some of them do emerge in 'The West' but only in reworked forms bereft of Doeraemon altogether, which seems a bit odd since they're usually designed specifically to take advantage of his splendour. I've already investigated one of his games here at Red Parsley which falls in this category, but most pass by without our knowledge altogether. I'm not even sure how many there are in total but one of the best known ones is this MegaDrive effort which predictably takes the form of a side-viewed platformer.

Its rather long title translates as "Doraemon: The Dream Thief and the Seven Gozans" which should tell you pretty much all you need to know of the story behind the game (except, perhaps what a 'Gozan' is), but to elaborate - a dastardly dream thief has stolen the dreams of seven children, predictably including Nobita and his friends with whom Doraemon hangs out, with the intention of creating his own personal paradise where nobody may trespass. It's not long though, before Doraemon does just that in an attempt to and save his friends by journeying through all seven stages (or 'dreamscapes'). These consist of scrolling landscapes which Doraemon has to cross – he starts on the far left and he needs to find the exit which is on the far right, with the distance between these two points being filled with lots of platforms, hazards, and of course many scary enemies.

Luckily, Doraemon has a few handy moves and talents at his disposal to make the transition as easy as possible. The three MD buttons are all used – one performs a jump, one shoots a water pistol which stuns enemy buffoons, and the third can either be used to pick up a stunned enemy and throw it. or allows Doraemon to run. That's not all though. Doraemon's water pistol can be 'charged' to fire a more powerful shot which downs enemies outright, and holding 'down' for a few seconds makes him flash, allowing him to perform a super-jump. Actually, it’s not that much higher than a normal jump but it’s often just enough! As well as this, he’s able to flap his arms around when falling to slow his descent, and he can grip vertical walls too, just like a real cat! Well, kind of – he’ll immediately start sliding down but you can still scale the walls by repeatedly jumping 'n' gripping.

For those who don’t know, the number ‘7’ is considered lucky in Japan, but this is something I’ve rarely seen infiltrate the video gaming world (the immortal 777 Speedway in Daytona USA is the only example I can think of!) but the designer of this Doraemon game must have been rather superstitious as there are lots of references to the number here. In addition to the numerous enemy creatures, exploration of the landscape will reveal several items including small yellow stars. Collecting seven of these will bestow an extra life upon Doraemon. There is also an occasional 'Super Star' which has a number in the middle; sometimes it cycles from zero to forty-odd, sometimes it display a random number. Either way, collecting it will give Doraemon the displayed number of Super Stars and once he's got seventy-seven, he'll be whisked off to a bonus round where it's possible to significantly increase his stockpile of lives. Even killing some enemies gives you 777 points!

There are a few special power-up items that are unrelated to this magical number though. Collecting doriyaki (small soft pancake things - Doraemon's favourite snack) gives him an extra life, bamboo dragonfly (a small head-mounted propeller) lets him fly for a limited period, winder keys give him temporary invincibility, clocks freeze the enemies for a few seconds, and collecting a doll creates a duplicate Doraemon that follows him around mirroring his actions. All mighty handy I'm sure you'll agree! In fact, you'd be forgiven for thinking that these many skills and collectibles might make crossing the seven dreamworlds a bit of a doddle. You would, however, be wrong (mostly), and there are a couple of reasons for this. It is easy for an experienced player to amass a substantial stockpile of lives (I had 17 by the end of the first stage alone!) but they can and usually are lost quite often due to respawning enemies and lots of bottomless gaps between platforms.

The stages that make up the Dream Thief's paradise are far from continuous landscape, you see. Indeed, the areas are frequently separated by chasms of doom from which there is no escape, but since the platforms occur at many different heights and positions, it's sometimes not possible to see where you should jump to next, requiring a good few 'leaps of faith'. Aside from this rather irritating design flaw though, the stages are highly appealing. They certainly look nice for one thing. Whilst not technically amazing, and pretty far from being on par with the Sonic series, I still really like the visuals here - the backgrounds feature subtle designs which are easy on the eye and the foreground graphics and sprites are really nice too. Detail, particularly with regards to the former, isn't amazing, but the design and colouring of them is good and the sprites are a particular highlight. The enemies are not exclusive to each world but new ones are introduced every now and then and they're great!

The most numerous kind, to start with at least, are the chickens with sunglasses which don't really do much except strut around causing death by touch (although they can fly too), but later ones are more troublesome. The first one that caused me any problems was the crab I encountered on the second stage which spits seeds or something at Doraemon, and he's a pretty good shot too! He looks splendid though, and some enemies that come after him, although mostly comprising strange creatures I can barely even describe, also look great as well. The highest praise must be saved for Doraemon himself, however. He is the most magical cat since Bagpuss so he warrants the attention he's received here - the detail is good and there's some fantastic animation that includes many amusing expressions and actions. The stages themselves are themed as you might expect, although to a slightly milder degree than in many similar games.

The first seems to be based on toys and features several ball-pits (you know - those things children play in), some including blowers, while the second is home to lots of slippy rainbow stairways as well as several music-related thingies such as bouncy musical blocks (wasn't there some of these in Super Mario World?). There is of course also a grassy stage, but Sega, playing fast and loose with platform game law, have made it the third stage and not the first! Other stages feature clock, space, and electrical stuff themes and most include a few familiar features such as springers, disappearing blocks/bridges, swinging platforms, etc. The exit of each stage is represented by a white door but you may encounter an occasional red door before that, usually in a hard-to-reach location. If you can get to it, it leads to a fruit machine-style bonus round where the chance for yet more extra lives awaits!

Strangely, these white doors do not lead to a boss fight but rather a boss 'contest' in which you must best one of the Dream Thief's cronies in a game of rock-scissors-paper. These parts of the game could prove particularly troublesome to non-Japanese speakers (like me) as they feature quite a bit of Japanese text. The presentation is top-notch throughout though, even if you might not understand all the text. There's an intro which reveals the story (in Japanese, of course) and the options screens which offer a 'regular' or 'fun' version of the game (the latter is miles easier and has much shorter stages) and a fortune-telling mini-game, but the boss encounters are the only example of the text really causing a problem. There are some nice touches through the game too, such as an underground cavern with water dripping from the ceiling which makes the floor progressively slippier, and the audio is fantastic. The music (some of which is from Doraemon's show) is catchy and there's even a good amount of speech which gets Doraemon's voice just right.

As you may have gathered by now, I like the Doraemon character a lot so I like this game too. In truth though, if you don't like him (or as is more likely, don't know who he is), then this game almost certainly won't have the same appeal for you as it did for me. It's not too original and there are dozens of games like it on the MegaDrive alone, but Doraemon's mere presence doesn't make a crap game good and I still really liked it. The number of extra lives on offer is perhaps a tad excessive but that's the only fault I would level at it. The metallic feline of the title has been adapted superbly to this adventure - he has lots of actions and control of him is outstanding. Add to that the bright and cheerful graphics, catchy sounds, and interesting stages with lots of secrets, and you're left with a mighty enjoyable game which would surely make a great addition to any MD platform fan's collection, even if you don't like Doraemon. If you do like him though, it's essential!


Don't know who Doraemon is? Learn all about him here!

Special Note: A big thanks to Sean of Famicomblog for his help in translating the options screens in this game. Cheers man, you saved me much confusion! :) Check out his fantastic blog here...
Posted by RetroKingSimon at 21:20