It's been a while since my last look at the SG-1000 so let's return to Sega's very first (and least successful?) console for another lucky dip. The random selection on this occasion has proved the most fruitful yet and includes three different kinds of shoot 'em ups and two nice platformers. Take a look: 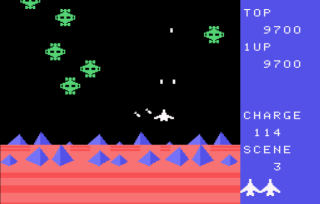 Like many SG-1000 releases, this one is a conversion of an arcade game, and like many of that time it's a single-screen shooter from the Galaxian school of swoopiness. It must've been a tough one to convert though, as the arcade version features a rather neat rolling planetary landscape at the bottom of the screen. Apart from this, it's business as usual with various formations of alien ships (and creatures?) appearing from the top of the screen and whirling around taking pot-shots at your small craft which can fire unlimited double-shots, but only one at a time, or single rapid-fire shots for a limited time. It also moves with inertia so can be tricky to control, but this version still proves to be a fair bit easier than the arcade game with one exception, which is a familiar one with the SG-1000 - the limited colour pallette means sprites sometimes get lost in the background. It's still an addictive blaster though, and Sega's machine even has a brave attempt at copying the rolling landscape. Good fun... 7/10 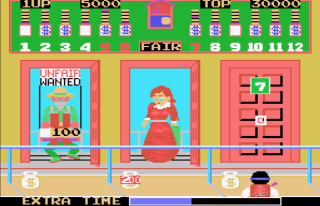 See what I mean? This one is another arcade conversion, and of another obscure game, but the only version I've played is the Master System offering, which is quite a bit different to the arcade game, but this SG-1000 version is much closer. All versions, however, see you take the role of a Wild West-style sheriff trying to foil a bank robbery by standing in the middle of a circular room which features twelve doors which you can scroll through, with three in view at any time. Through these appear either robbers, who you must shoot, customers, who give sacks of cash, or a boy wearing multiple hats which you can shoot off for a bonus. It's a pretty repetitive game and the controls are initially confusing, but the music is nice, the setting is quite unusual, and it soon proves to be one addictive little game! ... 7/10 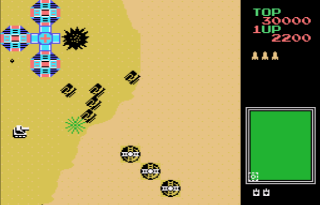 Judging by the release date of this one, it must've surely been among the last releases for Sega's fledgling console and it's also quite an ambitious one too, which places you in the vehicle of the title and dumps you in the middle of a land, a futuristic one according to the box-art, populated by millions of similar enemy vessels as well as guns and structures of numerous kinds. You can drive your tank freely around the landscape and have infinite shells with which to despatch your many foes. Amazingly, Super Tank reminded me of one of my favourite Saturn games - Mass Destruction - although obviously much more basic, but sadly it suffers from two problems. Control of your tank sluggish and jerky, and there's a lot of sprite flicker when many tanks are on the screen (which is quite often). It was an admirable attempt at a game that was perhaps a little too demanding for the SG-1000, but if you can work around the two problems mentioned, it still offers a lot of challenging blasting action... 6/10 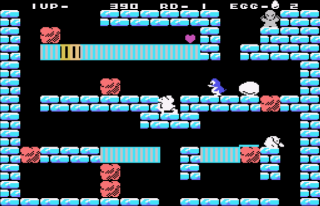 Hooray, good old Penguin Land! This has long been one of my favourite platform/puzzle games, primarily the splendid Master System version which stars you as a careless space penguin called Overbite. Presumably the same penguin features in this version which seems to be more or less the same aside from some simpler graphics. The idea is to use Overbite to steer his egg down through the vertical maze-like stages. The egg can only fall a short distance, you can't move it up, and there are numerous evil polar bears on the prowl as well, so passage through each of the 25 stages needs to be planned carefully. Accordingly, it's often possible to steer your egg into an undesirable location or dead-end and not be able to progress, but Overbite's slightly strange quest is a mighty enjoyable one which, if you're anything like me, you'll find it difficult not to keep trying! ... 8/10 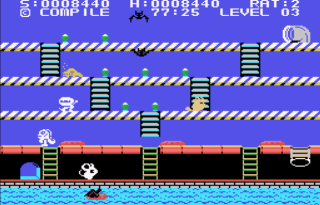 Some of the games released for the SG-1000 are ones I know of, some aren't but it's possible to determine at least something from them by their title. Hustle Chumy, however, was one I had absolutely no clue about until I pressed the start button. It was quickly apparent from that point that it's a single-screen platform game - a type of game I like a lot! This one stars a creature which looks and acts more like a chinchilla but is apparently a mouse according to the cover. His job is collect all the items from the simple platform 'n' ladders-based stages before returning to the mouse hole from whence he came. He can also deal with most of the evil creatures that inhabit the platforms by throwing what looks like meat-cleavers (!) and he has a mighty (chinchilla-like) jump which enables him to move much quicker than just by walking. Hustle Chumy is a very loud game but soon became one of my favourite SG-1000 games so far by way of its amusing hero and addictive gameplay. An unexpected treat which I enjoyed a lot, even if it did make my ears bleed! ... 8/10


Red Parsley will be back with some more SG-1000 mini-reviews soon! :)
Posted by RetroKingSimon at 17:00