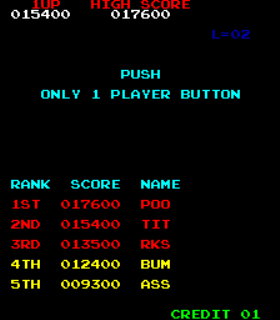 It was apparently Nintendo's desire to establish a foothold in the lucrative US games market that saw the birth of Donkey Kong. To say that it helped them achieve that goal is something of an understatement - it was an instant smash hit and made Nintendo hundreds of millions of dollars - but it was also a landmark game for many other reasons too. It wasn't strictly speaking the first ever platform game but it was certainly the first really popular one and established several features that would go on to become staples in the genre. It was also designed by a certain Shigeru Miyamoto under the supervision of Gunpei Yokoi, both of whom would go on to become rather successful! 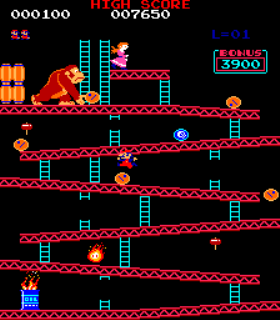 You could even say they'd become among the most influential figures in the history of the industry, but the most obvious reason for the game's place in history (besides itself) is that it marked the very first appearance of Mario, known as 'Jumpman' at the time. Considering all this history, including that of the game in its own right of course, it's slightly strange that prior to this feature I hadn't ever played it properly. Its immense fame means I know much of what there is to know about it, and I can say with some confidence that I have played it before, although I've no idea when or on which system, but I think I'm long overdue for a proper dissection of Nintendo's first big hit. 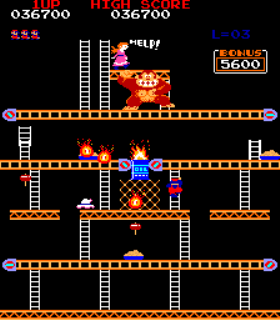 One thing I didn't know, actually, is the back story, such as it is. It seems that Donkey Kong (not a misspelling of Monkey Kong as many believe) is Jumpman's pet gorilla who he doesn't treat very well. In an act of rebellion, Donkey Kong escapes and kidnaps Jumpman's girlfriend, called 'Lady'. Instead of merely apologising to his pet and seeking forgiveness, Jumpman apparently decides to take on the sizeable chump in a battle for Lady's honour. Being a gorilla, he's pretty good at climbing so he drags Lady to the top of four single-screen stages. Jumpman, who is notably less proficient at jumping (despite his name), must then clamber to the top of each stage himself. 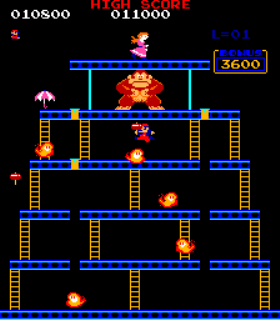 I'm sure most people reading this will know said stages better than I do but for the benefit of those that don't - the first features six sloped platforms down which DK is throwing barrels, the second partially consists of conveyor belts and some wibbly flame things as well as several deadly pies, the third has some whirly lift platforms as well as a couple more flames and an annoying hoppity thing, and the final stage features many more flamey things hovering around five platforms linked by rivets which Jumpman must remove by walking over them. Doing so causes the tower of platforms to collapse taking DK with them and finally reunites our hero with his hopefully-grateful Lady as well! 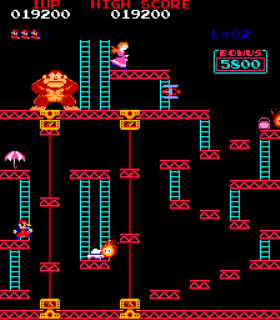 All stages feature ladders linking most of the platforms which Jumpman can climb at his leisure but he's unable to fall any distance without losing a life, and that includes falling through the gaps created by rivets removed from the final stage (as I found out to my cost!). All stages but the third feature hammers which allow Jumpman to smack up barrels, flames, or pies for a limited period, but he can't jump or climb ladders while using it and there's no warning when it's about to run out, so use with care! The only other items laying around are apparently personal belongings of Lady such as her purse and umbrella which are worth extra points, but Donkey Kong never was remembered as a complex game! 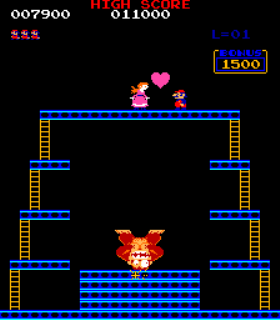 The only thing that's really confused me is the order of the stages. Supposedly there is an order but they just seemed to be a random jumble after the first two as far as I could see. Still, regardless of the order, their ever-repeating nature is good news for high score chasers - so good it even spawned a rivalry intense enough to inspire a movie! For mere mortals like me, however, DK is a pretty tough game. The graphics are quite nice for the time. Backgrounds are all black of course, and the foregrounds mainly consist of different coloured girders and ladders, but the design of the sprites is appealing and timeless. The flamey things have quickly become a particular favourite despite being the most annoying enemies, for example! Jumpman and DK themselves are superb too, even if they're not animated well, and the game remains a very charming one despite featuring no in-game music and limited effects. The only problem I encountered really was with control of Jumpman, specifically with regards to getting on or off ladders which seemed sluggish enough to cost me a good few lives. That hasn't stopped me from trying again though, and DK is as addictive as most of the other early classics. It may arguably be a game that's more famous these days for its 'firsts' than as a game itself, but my first proper DK experience has revealed it to be slightly frustrating, maybe a bit repetitive, but more than enjoyable and addictive enough to make up for that. Now to try the sequels to see it they sorted the controls out!