There's not really much point in me reviewing any Studio Ghibli films other than to be yet another voice extolling their many wonderful virtues; most of them would probably get 10/10 anyway! Something that's much harder to do is settle on a Top Five. I haven't yet seen every single one of them, admittedly, and I may have to amend this list accordingly once I have, but I've seen most of them and only one was anything less than overwhelmingly wonderful. In fact, I'd even go as far as to say Ghibli films should have their own category, so superior are they to all other animated films, anime or otherwise.

Part of the reason for this is their unmistakable style, thanks largely to the amazing dedication of key man, Hayao Miyazaki, who has directed and/or overseen many of their productions, the consistently extraordinary quality of which has seen the studio dubbed the 'Disney of the East'. Their films tend to have noticeably higher production values and audio/visual quality than most other anime - the soundtracks are usually original compositions and Miyazaki-san overwhelmingly favours hand-drawn animation over the use of computers. He personally checks countless thousands of hand-drawn images and he often draws many of them himself as well.

Most of the films share certain basic themes too. Many feature a young but ultimately strong female lead, usually undergoing some sort of right-of-passage or coming-of-age transition. They also rarely fail to feature at least some otherworldly spirits of some sort, and there is usually an element of pacifism as well. However, as much as you might be able to analyse the films, their characters, the themes explored, etc, doing so is far from necessary to gain immense enjoyment from watching them and being drawn into their respective worlds regardless of age.

So, as hard as it was to settle on only five films to include, if you haven't seen any of these, do yourself a favour - don't dismiss them as childish or unrealistic, just watch them. And then thank me! :) 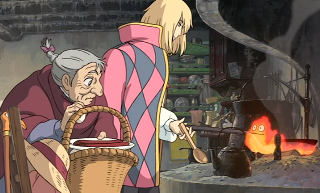 A few of Studio Ghibli's films are based on novels but this one is, slightly surprisingly, based on an English one. I feel so proud that Miyazaki-san knows we exist! You'd probably never guess its origins though, as the story seems pure Ghibli from start to finish! Although Howl, a young and enigmatic wizard, may have his name in the title, it's a young hatter called Sophie who takes centre stage when she's cursed after encountering the Witch of the Waste. It's while pursuing a cure for this curse, which has turned her into an old lady, that she happens upon Howl's castle which does indeed move. Sophie's quest through her war-torn land comprises a film that differs considerably from the book on which it's based but that doesn't stop it from ending up as one of the most memorable films I've seen, with some of my favourite Ghibli characters, too, including Calcifer the fire demon, an asthmatic dog called Heen, as well as the eccentric Howl himself. A wonderful film and a great introduction to Ghibli for any newcomers. 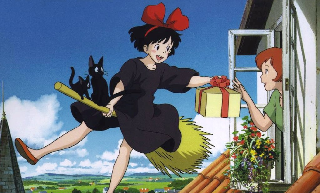 Despite earning as much critical-acclaim as most other Ghibli productions, Kiki's adventure is probably less well-known than most of the others which is a shame as it's a delightfully charming film which is based on a book of the same name. It's also a much lighter film than the one that preceded it, the bleak WWII-set Grave of the Fireflies, and is another to feature a young female lead, in this case Kiki, a 13 year old witch-in-training. As part of her training she is required to live for a year by herself in the city and use her magic to make a living. To this end, she, along with her sarcastic black cat Jiji, starts a delivery service. Kiki's film is one brimming with appealing characters and her airborne antics, as well as the city in which she performs them, are immensely charming. 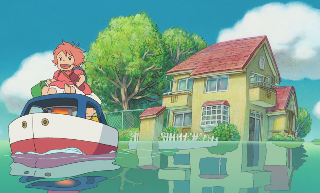 Despite surely being one of the most imaginative humans ever to have lived, Hayao Miyazaki is not above taking inspiration from existing stories, and this, the most recent film on this list, is one. The story in question is that of The Little Mermaid but it has been heavily Ghibilified as you might expect, with the result focusing on young boy, Sosuke, who discovers Ponyo, initially a small goldfish-like creature, washed up on a beach stuck in a bottle. The two soon form a close friendship before her father, a wizard who lives underwater, begins frantically searching for her, employing the wave spirits who inadvertently cause a tsunami that envelops Sosuke's small village. Whilst perhaps not wholly original, Ponyo is far more than just a remake of the Danish fairytale and is firmly imprinted with Miyazaki's unique touch, as well as being arguably one of the most visually arresting works to come from the great studio to date. 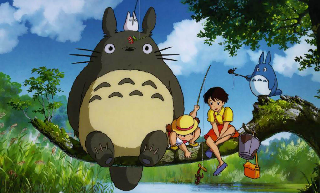 Whilst almost all Ghibli films can be enjoyed by pretty much all viewers, some of them are clearly geared more towards a certain demographic. Such as My Neighbour Totoro, for example, which most would call a children's film, but anyone who dissmissed it for that reason would miss an unforgettable treat! It was intended by Miyazaki to remind modern Japan what living in the country was like and centres on two young sisters who, while waiting for their mother to return from hospital, spend their days exploring the forest next to their house... and find a variety of strange creatures dwelling therein, including the sizeable fellow of the title who quickly became so popular he was adopted as the company's logo! It's a film less involved with story than usual Ghibli films but you'd never notice when the cast of characters is so charming. You might watch it with your kids but I defy you not to enjoy it more than they do! 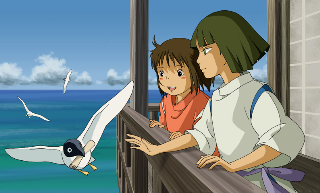 It was probably the thoroughly splendid Princess Mononoke that first made many Westerners aware of the wonders of Ghibli, but Spirited Away is the film that really made people sit up and take notice, winning every award it was nominated for in the process. It also did rather well in its homeland, switfly becoming the most successful film in Japanese history - quite an achievement really! It was a film that allowed Miyazaki-san's fertile imagination to run riot more than ever before too, owing to its premise which starred sulky young girl, Chihiro, who had been separated from her parents and trapped in a strange world inhabited by spirits and monsters. Whilst basically a coming-of-age story and having parallels with Alice in Wonderland, Spirited Away is a wonderful journey through a fantastical alternate world and is probably the greatest animated film I've ever seen.
Posted by RetroKingSimon at 14:04