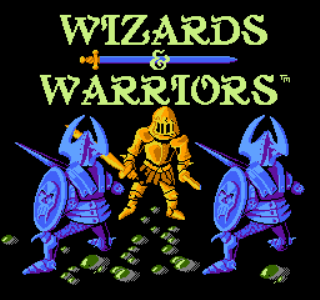 I've mentioned here at Red Parsley a number of times how I pretty much missed out on the whole NES phenomenon due to my allegiance to Sega but I did actually own an NES at one point, albeit rather late on in the system’s life. I bought it from a charity shop with around 12 loose games. Sadly, it turned out that the grey toaster didn’t work so I never got to play any of the cartridges I had which included some of the classics and some I was less familiar with. Of the latter type, there was one in particular I was eager to try out and that was Wizards and Warriors, a title released by Rare in the late 80’s exclusively on Nintendo’s machine. I often find myself drawn to games with a fantasy setting and the simple-but-revealing title had intrigued me. I had imagined some sort of deep and involving ‘Metroidvania’ style arcade adventure, and now I have the opportunity to to find out if I was right.

As you may have guessed from its inclusion in the 'Platform Games' feature rather than the 'Arcade Adventures' one, my preconceptions haven't turned out to be strictly true. That doesn't make it a bad game though, of course, and it has a suitably rousing backstory to set the mood. The characters of the title are Kuros, 'Knight Warrior of the Books of Excalibur', and Malkil, one of the greatest wizards in the land but also apparently one of questionable morals for he has captured the kingdom's obligatory princess and imprisoned her in Castle IronSpire. Under your guidance, Kuros must battle through the forests of Elrond and liberate the princess (and perhaps gain her favour too - sweet!). The route to her and the scarily-named castle in which she's imprisoned, however, is a strange one. Prior to starting the game you're presented with a nice map screen which shows Kuros' position as quite close to the castle. Instead of trotting across land to reach it though, it's seemingly necessary to instead travel in a huge sweeping circle beneath the ground!

This takes in eight stages which are set in the aforementioned forest as well as various caves and the castle itself. Although their order and your objectives in them are linear, exploration of them is not. They're all side-viewed, scrolling, multi-tiered affairs and there's no time limit meaning you can walk and jump around their various landscapes and floaty bits as much as you want. Doing so isn't always the best of ideas though, as many evil creatures populate them in addition to the collectible items there. Even worse, the enemies are infinite! Kuros is armed with a sword called the Brightsword which doesn't have a great deal of reach but must be rather powerful as he doesn't even need to swing it to kill the weaker enemies. Indeed, even if he's merely holding it and something touches it, it will take damage or even die! He can swing it though, and it's probably advisable to do so where possible. He can also jump quite high considering he's wearing what must be a weighty suit of armour, and it must be this weight that contributes to his ability to damage enemies by jumping on them too. 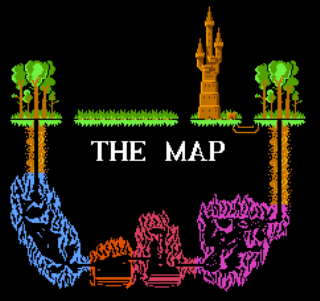 Only very precise jumps will achieve this though, as it's only the tip of his boots that are effective, apparently. Luckily, there are many other weapons and items to look out for, and most of them have splendid names too! The two main examples of the former are the 'Dagger of Throwing', which has a greater range than the default sword and returns like a boomerang, and the 'Battle Axe of Agor' which behaves in the same way as the dagger except it's stronger and therefore replaces it. Both of these can be upgraded up to three times which increases their range. There are also some less-aggressive items which should prove equally useful including eggs, which act as smart bombs, clocks, which freeze enemies for a few seconds, and three types of potion - blue, which allows you to run faster (and therefore jump further), red, which acts as a temporary shield, and pink, which increases your jump height. Aside from the weapons which are permanent, these items offer only a single use at the time you collect them, but there are also several equipment items which are available to use as much as you want for the rest of the game.

These include the Shield of Protection (repels weaker enemy projectiles), Potion of Levitation (lets you hover a short distance from the ground), Feather of Feather Fall (slows the speed of your falls), Boots of Force (can damage enemies and force chests open), Wand of Wonder (fires magic rays that freeze enemies for a few seconds), Cloak of Darkness (reduces damage by enemies), Boots of Lava Walk (protects against a particular section of fieryness), Horn (reveals secret areas), and finally the Staff of Power (fires long-range projectiles). The usefulness of this kit can vary depending on the item and situation but it doesn't hurt to collect them anyway as there are hordes of enemies which can prove mighty bothersome! There are two forest stages and these are home to creatures such as birds, werewolves, hornets, and spiders. The caverns that separate the two forests contain bats, ants, snakes, and rocky/fiery creatures, as well as various traps and shooty thing, while the castle itself is patrolled by slightly more sinister adversaries such as gargoyles, goblins, ghosts, and skeletons. 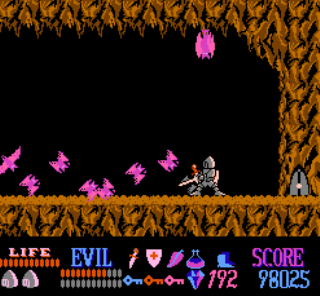 Contact with any of these clots costs Kuros some energy, although this can be replenished by collecting any hunks of meat you might come across. Despite the number and variety of the enemies, defeating them isn't mandatory, but doing so will give you points and quite possibly some treasure as well. Treasure consists of coins and gems and can be found in the rotting corpses of downed enemy creatures, in acorns (forest stages) or torches (elsewhere), in chests, or just laying around. The treasure chests are all locked though, so unless you have the Boots of Force, you'll need to find the correct coloured key. The coins come in small and large varieties and are only worth points but gems are far more valuable. There are several kinds of these as well which are worth different amounts, but more importantly there is a guardian at the end of each stage to whom you must pay a set number of gems before you can pass. The object of each stage is therefore to search for and collect gems as well as other items. 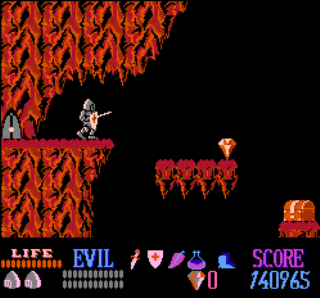 If you're rich enough to pass the 'gem guardian', there is then a boss fight before the stage is finished, with a 'damsel' awaiting rescue upon success, all ready to show her appreciation, no doubt. The number of these that you will reach and possibly pass, however, is the subject of a strange clash in game design. When I first started playing W&W, it found it annoying, confusing, and highly frustrating. It's not particularly obvious what to do or where to go on the first stage, which is the case with many games of course - pootling around a new game world exploring and experimenting is often a source of much enjoyment. However, this is not an easy game, especially when you first start and have yet to collect any new equipment. It's very easy to take damage from the infinite/respawning enemies and lives will be lost frequently, probably accompanied by angry shouts or even thrown controllers. However, while you may only get three lives, it then becomes apparent that the game also furnishes you with infinite continues. 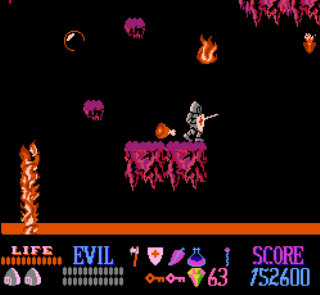 Not only that but if you lose a life you keep all items collected up to the point of death and you'll even keep most stuff when you use a continue too! This makes Wizards & Warriors simultaneously the hardest and easiest game ever! It also ruined my enjoyment of it somewhat but it did improve and reminded me of some of the other earlier NES-exclusive titles in terms of its style. Although not released in the UK until 1990, it's a rather older game in reality, and for its age it's not bad as far as the presentation is concerned. There's a decent number of different sprites, although their design and animation is often quite basic, but Kuros himself looks great, especially when he's kitted-up (okay, I guess that just means I like the shield!). Backgrounds are mostly featureless black voids but the foregrounds, while repetitive and mostly consisting of simple patterns, are quite nice as well, and fairly atmospheric - something helped by the equally simple but catchy music. 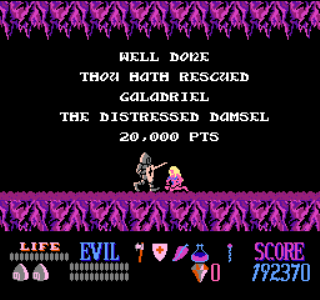 It does at times seem a bit like a medieval version of Metroid too, although not nearly as good (what is?). The forest stages are a pain thanks to the infinite airborne enemies coming from all directions, and the castle, whilst tough, is nicely designed, but the bulk of your time will most likely be spent in the caverns. These have the occasional branching path and contain various hidden areas, and are definitely the most enjoyable part of the game for me. They still include some unfair traps and annoying enemies such as flames or bats, again coming from all around and often with very little warning, but exploring them can be a rather compelling activity. Overall though, it's really difficult to decide what to think of Wizards & Warriors - it looks and sounds okay, I like the premise, and the main character and the equipment he can collect is appealing, but a few questionable decisions on the part of the developers come close to spoiling all that. 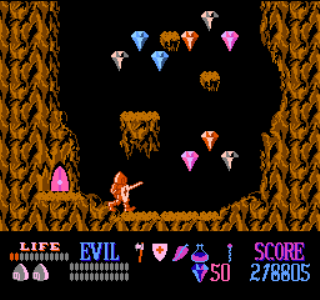 Yes, it's possible to see the whole game with comparative ease but dying and continuing over and over again isn't the most enjoyable way of doing so - the game was effectively released with an infinite lives cheat and we all know how much cheating can ruin a game! Maybe if the number of continues was limited and the enemies were a bit tougher (i.e. took more than one hit to kill) but didn't regenerate, this would be a much more structured, balanced, and enjoyable game. As things stand, it's promising but mighty annoying too. Rare (or Ultimate, as they were known at the time) were legends on the Spectrum, and they went on to rival Nintendo themselves for the quality of their releases on the N64, but their work inbetween these two eras is not of the same consistently high standard in my opinion, despite the critical acclaim. Not terrible, just disappointing.