It’s no secret here that Sega’s mighty MegaDrive is probably my favourite console, and accordingly it’s the one I’ve spent the most time with and played the widest variety of games on. Included among these have been many fine two-player games – more than I remembered prior to starting this feature actually, which made it harder than I had expected to choose the five titles below. To help me narrow it down a bit, I’ve ruled out arcade conversions as has become normal with these lists (there are more than enough to these on the MD to have their own list) and I’ve also tried to choose five games which are actually enhanced by the addition of a player rather than simply allowing a second player to join the otherwise unchanged action. To that end, behold: 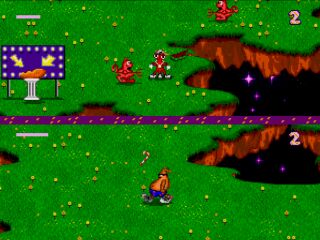 Coming at a time when Sega were at their peak in my opinion and seemingly acutely aware of what their customers wanted, ToeJam & Earl was and remains a unique and original arcade adventure starring the two 'hip and cool' rapping aliens of the title who have crashed their ship on Earth and must now scour the surface for all its component parts. The game world consists of a succession of weird floating islands which are randomly generated. This increases the longevity in either one or two player mode but the stages can get rather large too, so it certainly helps to have two sets of legs scooting around. There are lots of strange power-ups to search for as well, also random, and the peculiar characters and music make this a very memorable game. In my experience, there's never been anything quite like it and exploring its unusual world with a friend is fantastic fun. 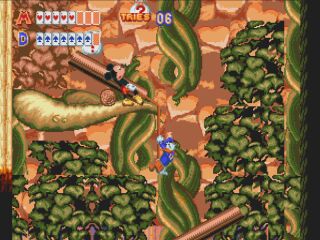 Two-player platform games are rare enough to begin with but ones that also require both players to work together are like gold-dust! That was the very premise behind this game, the closest MD owners had to a Castle of Illusion sequel, and it featured both Mickey Mouse and Donald Duck. While either of them could be controlled by a single player, with each of them behaving slightly differently, the game was made to be played by two. There were many obstacles and entire sections of some stages where both players had to combine their talents and use teamwork to overcome problems, as seen in the screenshot here - one character pings the other up to higher platforms on a see-saw with the higher player then pulling the other up with a rope! Add to this some superb graphics and music and the result was a tremendously entertaining game that was unlike any other platformer around. 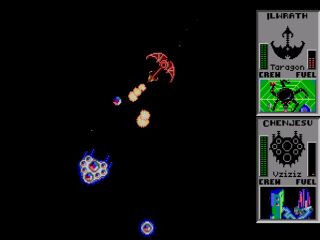 Regular readers here will know of my love for the Star Control games - the second instalment is my favourite game of all-time, after all - but this first one was far from ploppy itself. The main game is a turn-based strategy game with each side starting on opposite sides of a rotating starfield with the object of smacking each other up by way of destroying enemy ships, overrunning colonies and mines, and ultimately occupying their starbase. When two opposing ships meet, the action switches to real-time, overhead viewed space combat. The latter can be played separately as a game in its own right and predictably proved to me more popular than the main game itself, and how could it not? Two fleets of spacecraft, each with unique weapons and abilities, trying to outwit each other - it was as strategic as the turn-based part of the game and provided some immense and thrilling battles. And don't forget - if you crash into a planet, it's a draw! 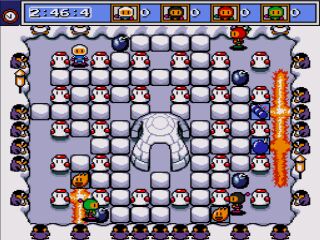 Yes, I know, this is basically a conversion of the already-celebrated PC Engine game, Bomberman '94. However, all retro gamers know of the multi-player splendour that pretty much all Bomberman games have to offer and as the series’ sole representative on Sega's 16-bit system (or 8-bit, actually), it’s a dead-cert for inclusion! The single-player mode is among the best the series has to offer and includes some of the most varied graphics yet seen and also introduces the 'Rooeys' - small dinosaur creatures with unique abilities. Fortunately, all this spiffyness can also be found in the riotous 'Battle Mode' which not only offers two-player fun but can also incorporate up to four players! There are masses of options so picky gamers can tweak the action to their heart's content but even if there wasn't, near enough any version of Bomberman Battle Mode will always offer some of the most multi-player fun to be found on any system. A great version of a great game! 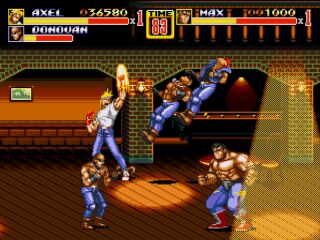 It tops a lot of polls, this one, and it’s really not hard to see why. Streets of Rage was a very good game, it gave us the delightful Blaze Fielding if nothing else (hee hee!), but SOR2 improved on it in every conceivable way. The fantastic visuals are among the best the MD has to offer, the amazing audio surely is the best, and the already-superb gameplay was polished and refined to create a game that not only rivalled Final Fight, as was the intention, but bested it in the minds of many. Of all the games my good friend Luke and I tackle together, this is almost always the one met with the most enthusiasm. The four selectable characters are all different enough to make any combination of two a potent mix which not only makes the otherwise rather tough game notably easier (when you’re not hurting each other), but also heightens the enjoyment of playing it so much that I’d almost go as far as saying it’s the only way to play it. One of the best scrolling fighters of all-time and an utterly essential two-player game.


As is often the case with these lists, singling out five games was pretty tough, so honourable mentions go to: Crack Down, Gauntlet 4, Battle Squadron, Gunstar Heroes, Golden Axe, Alien Storm, General Chaos...
Posted by RetroKingSimon at 13:10