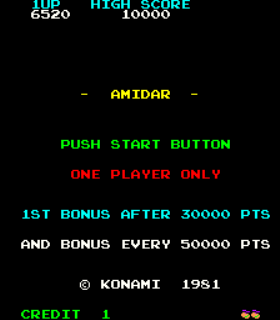 Like most of the early arcade classics, Amidar is one that’s been copied and cloned many times over the years. My favourite example is probably Zoom for the MegaDrive (what else!) but, as is often the case with me, it's this and some of the other clones that I'm more familiar with than the original itself. Most of the various versions differ only in their aesthetic properties though - the basic premise is generally the same, and that is simply to turn squares from one colour to another by encircling them! In the case of Amidar, each of the single-screen stages (or 'frames') features a grid viewed from directly overhead and consists of non-evenly-shaped squares, the lines around which feature... coconuts. 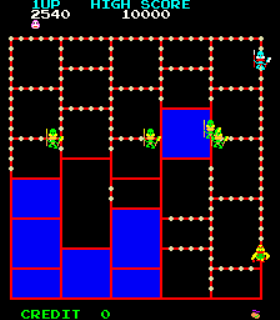 Accordingly for such a quarry, the character you control at the start of the game is an ape who is given free reign to wander the grid. If he walks all the way around any given square, it will change colour. Attempting to stop you from doing this are enemy attackers called 'Amidars' which have a similar range of movement, and, concerningly, can sometimes move just as fast as our hairy hero. The only way to combat this threat is to shake the grid which makes the Amidars jump but you can only do this four times per level, so they're for emergency use only. Once all the squares have been changed it's on to the next level where you'll now find yourself in control of... a paint-roller! 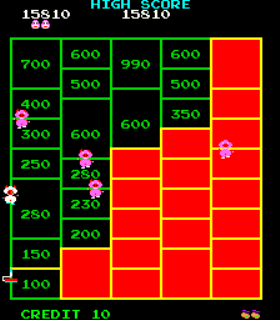 Indeed, it soon becomes apparent that the ape only appears on odd-numbered levels and the paint-roller on even-numbered ones, with the enemies also changing between 'headhunters' and pigs respectively. The paint-roller stages are more difficult too, as you have a finite supply of paint. To keep it topped up, you need to keep close to completed squares. Each stage also contains one 'special' enemy called a 'Tracer' which circles the perimeter of the stage, but after a certain number of 'laps' it will instead dedicate itself to hunting you down! Your only help comes in the form a brief period of invincibility which is earned by filling the squares in all four corners of the grid. 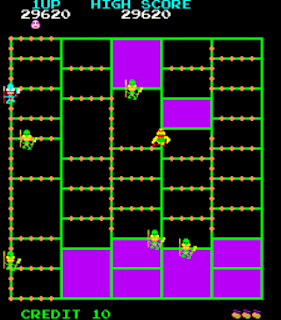 Apart from a short bonus stage between each level, however, the scenario remains unchanged throughout the game. It does gradually get more difficult as you would expect, with later levels featuring more enemies and shorter countdowns before the Tracer is unleashed, but is the game enjoyable enough to keep you plugging away? For me, not really I'm afraid. Games like this are usually very addictive but I found myself with very little desire to even continue playing it, never mind repeatedly return to it. I think it's because of the rather uninspiring visuals which I personally don't find appealing at all. The design and colour of the levels changes slightly, albeit with an understandably limited pallette, but not the graphical style, and the characters aren't too endearing either - the yellow ape is passable I guess but who would be excited about controlling a paint-roller? There's a pleasant enough little tune that plays in the background and the effects are quite nice but the controls are a bit irritating too, which doesn't really do much to tempt you back. In theory, Amidar is just as enjoyable as many other early classics, and perhaps the fact that I'm used to more modern clones is dulling my enthusiasm for it, but I'd still much rather play one of them than this original which has little charm or character about it. Sorry!